WaterAid has launched its first virtual reality documentary, Aftershock. The film immerses viewers in the unique challenges faced by hill-top communities in Nepal to restore access to water in the aftermath of last year’s devastating earthquakes.

Shot in the village of Kharelthok, Aftershock uses the power of virtual reality to engage viewers as they follow plumber Krishna Sunuwar, 58, taking on the challenge of repairing the community’s damaged water system. Across earthquake-affected areas in the region, nearly half of all water supplies were destroyed leaving thousands of people without enough clean water and vulnerable to disease.

Produced and directed in-house by the WaterAid film team, Aftershock is set against the breathtaking backdrop of Nepal’s mountain communities. Aftershock can be viewed on a laptop, but for the most immersive virtual reality experience viewers need a virtual reality headset, headphones and a smartphone with the Aftershock app downloaded. The film will work on Gear VR headsets: https://www3.oculus.com/en-us/gear-vr/ & Google Cardboard or similar: https://vr.google.com/cardboard/

The app is currently available for download via the Play store and App Store. Or search "AftershockVR" in your chosen store on your smartphone. Note Google Play app is @800MB and the Apple iTunes is @1.3GB. 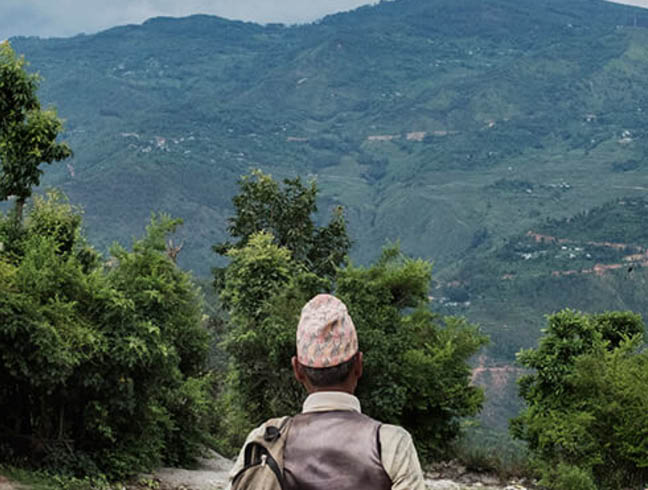 WaterAid film producer Catherine Feltham said: “Virtual reality gives us the opportunity to take people closer to our work than ever previously possible. By using this new medium we hope to engage supporters in the reality of where we work and the challenges we face as well as inspire them by proudly showing how we work alongside fantastic community members and project partners. The beauty of this medium is that it allows the viewer to be fully immersed and we look forward to seeing the reactions of people all over the world as they are transported to Kharelthok.”

WaterAid premiered Aftershock at World Water Week in Stockholm where it was shown to more than 200 experts, donors, practitioners and policy makers from around the world.

Aftershock was funded by HSBC as part of WaterAid’s global partnership with the HSBC Water Programme. Over five years, this exciting partnership has reached 1.4 million people with safe water and 2.1 million people with sanitation across Bangladesh, India, Nepal, Pakistan, Ghana and Nigeria. The partnership also supported WaterAid’s efforts to restore access to safe water and sanitation for communities in Nepal that were devastated by the earthquake that struck in April 2015.

HSBC Senior Manager of Environmental Programmes Sue Alexander said: “We are proud to support WaterAid through the HSBC Water Programme including their long-term recovery efforts in Nepal. I have seen first-hand WaterAid’s work, which is bringing improvements to so many lives. Through the medium of Virtual Reality, we can bring people closer to that experience. Aftershock tells a powerful story that is a reality for millions of people living without access to safe water, and we’re delighted to help bring this issue and the important work of our partners to life. ”

Together with partners, WaterAid is supporting Nepal’s long-term recovery over the next two years. Using a ‘build back better’ approach, the project aims to reach 30,000 people living in earthquake-affected areas with access to safe water, sanitation and hygiene. WaterAid is working with partner organisations and community leaders such as Krishna to ensure that communities own the project.