Cambodia’s Tonle Sap Lake is the largest freshwater lake in Southeast Asia. Located in Northwest Cambodia, the vast body of water was once one of the world’s most vibrant ecosystems, abundant with fish and wildlife. Millions of people moved to its floating villages in pursuit of a better life, and up until 20 years ago, they caught hundreds of kilos of fish every day.

But life on the Tonle Sap is under increasing pressure. The lake operates on a ‘flood pulse’ system, like a beating heart. Each year, it relies on the Mekong River reversing its flow to replenish supplies, providing most of the country’s fish. During the six-month dry season from December to April, the lake covers about 1,500 square km. And during the wet season – May to November – the lake swells up to six times its original size: equal to the landmass of the country of Lebanon.

In recent decades, hydropower developments along the Mekong River have been sapping up precious water supplies. According to a report by the Mekong River Commission, since 2018 the volume of Tonle Sap has dipped below its historical average. The effects of the climate crisis may still feel like an abstract concept for those in the West, but for the people of Tonle Sap, it is very much a lived experience. A deadly combination of droughts, overfishing, and infrastructure development is weakening the lake’s once lively pulse. This is threatening the ecology of the lake, as well as the livelihoods of the communities of floating villages that call it home.

This crisis is the focus of a new project by Singaporean photographer Calvin Chow, commissioned by WaterAid in collaboration with Studio 1854 and British Journal of Photography. Titled Once Beating Heart – a reference to the lake’s unpredictable pulse – the series is part of the WaterAid Climate Commission: photographic projects exploring how climate change is affecting people’s access to water. In Cambodia, the charity is working with local NGOs and the government to ensure that every Cambodian has access to water, sanitation and hygiene by 2025.

Soaked in the warmth of the sun, Chow’s images are soft and vibrant at once – attentive to his subjects and their way of life. He dedicated hours to talking to the people he photographed. These conversations revealed how the water crisis intersected with many other issues that the communities faced. He met Mr. Ta, who lives in a floating home with his three-year-old daughter. Fishing has been his family’s source of income for generations, and without it he is unable to afford clean drinking water. He relies on water from remote areas of the lake, hoping that it is safe for his family to drink. The murky water can be seen in the background of the image [below]. 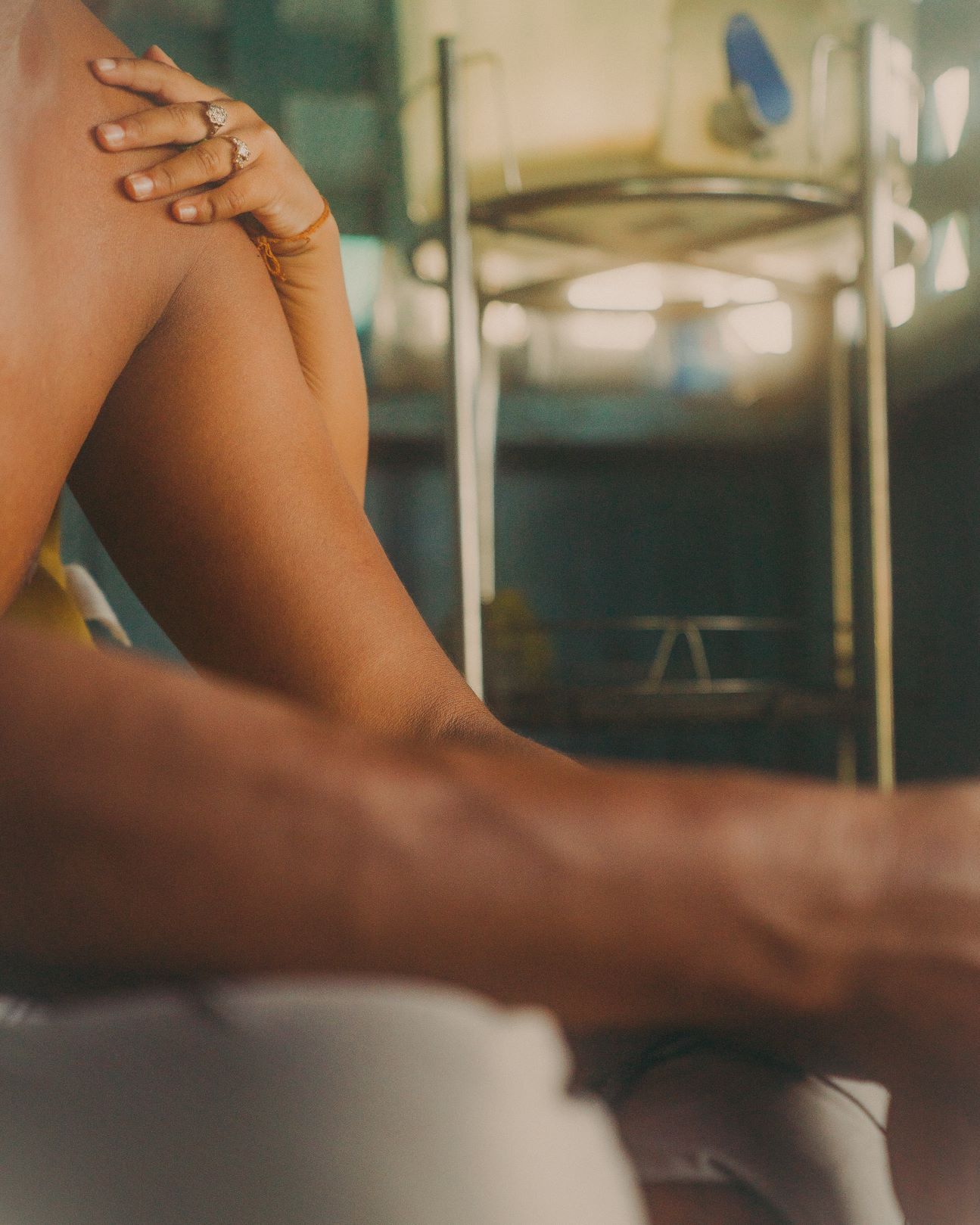 Mr. Ang is a pastor at a floating protestant church. Originally from Vietnam, he has lived on the Tonle Sap all his life, and the floating church is his home. Tattooed on his forearm the date of his mother’s date of death. Mr. Ang has no intention of leaving the Tonle Sap. He intends to live out the rest of his life there, unlike some of the younger Vietnamese migrants who have returned to Vietnam in search of better job prospects.

Mr. Hun Ham and Ms. Sok Lai’s floating home is decorated with photographs of their children [above right]. According to a 2018 report, a high proportion of children living on the Tonle Sap drop out of school. Nearly 45 percent do not complete high school, with a higher rate among water-based and minority households. Many families can't afford to send their children to school because of the cost of transport, books and uniforms. Mr. Hun Ham and Ms. Sok La hope that all eight of their children will be able to finish high school and pursue a better future. 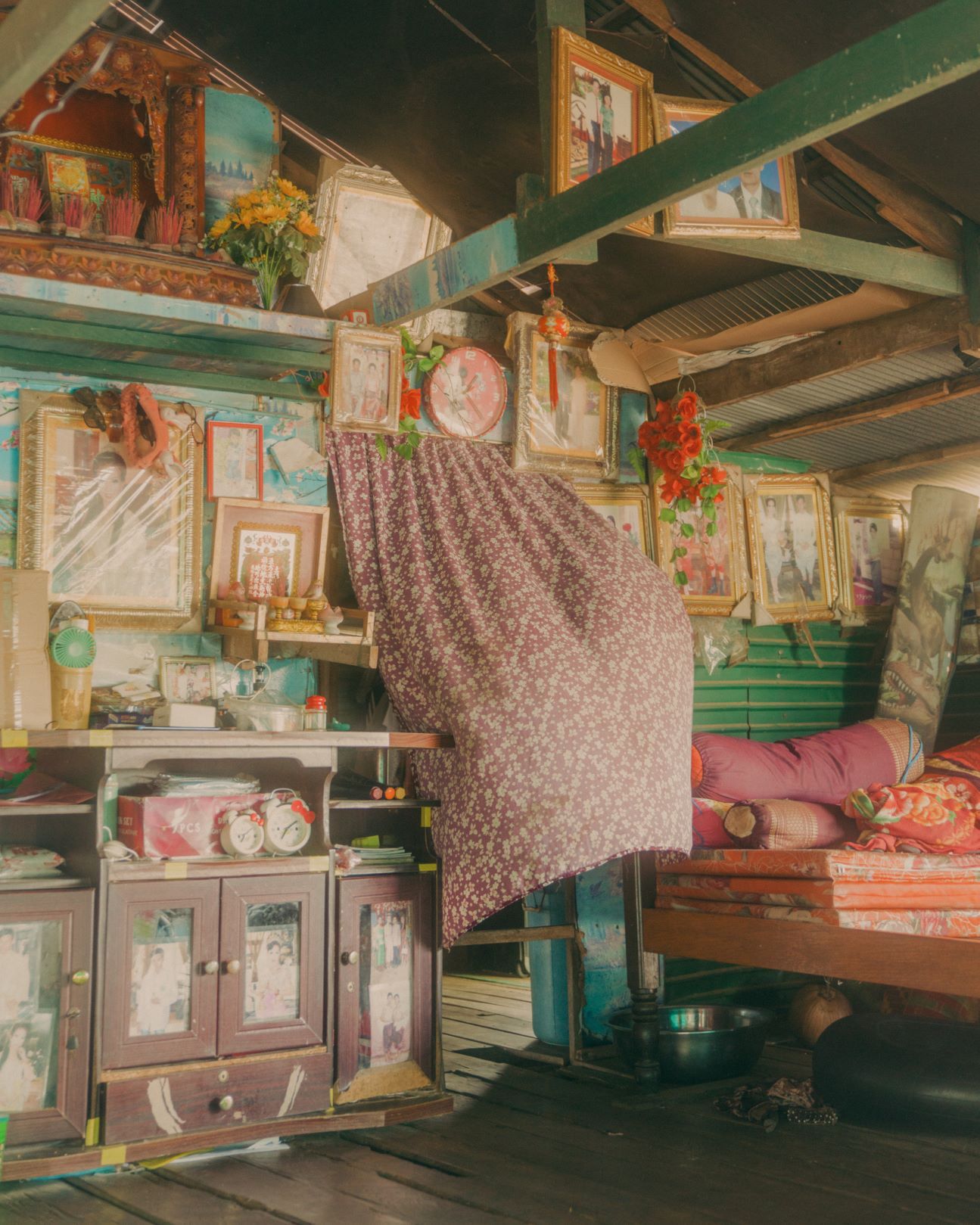 Once Beating Heart is not only a story about water and climate change. It is a story about inequality, education, and geopolitics, and how all of these issues intersect with one another. “[These family’s] lives are shrouded by this complex web of circumstances,” says Chow. “Ultimately it really all boils down to the fact that when there is no fish, there is no income for people to afford basic necessities.”

Chow’s series was made over 16 days in the peak of the wet season. The Singaporean photographer travelled on a “tiny boat” with a driver and translator who helped him access the floating villages, of which there are a total of 170. They spent all of their days on the lake, with no escape from the unforgiving heat of the sun. Most nights were spent on the boat too, or sleeping “wherever people let us sleep”. “I would say it’s one of the hardest things I’ve ever done,” says Chow. “But I actually got very comfortable after six or seven days, sleeping on a wooden floor with a mattress and mosquito net, eating rice and tiny fish everyday – breakfast, lunch and dinner.”

If life on the lake is so tough, then why do people stay? By spending 16 days on the Tonle Sap, Chow was finally able to understand. “During sunset – and I saw some crazy sunsets – you sit on the lake, singing karaoke, and it’s like the best feeling ever,” he smiles. These families have built homes, shrines, and communities on the water; leaving that behind is easier said than done. “Everyone I met was so happy,” says Chow. “They live simple lives. They go out, they fish… They sing karaoke, sometimes they get drunk. They live a chilled out life on the water, and that’s what they’ve been doing for generations.”

Chow was keen to portray the beauty of the Tonle Sap. When he finally got to the middle of the lake, it was like being in “a 360 degree projection” – like the middle of the ocean, except the water was completely still. “It’s like being on glass,” he says. “Sometimes you can see tiny little boats floating on the horizon, like spaceships. It’s something that no photograph can replicate.”

The WaterAid Climate Commission is a collaboration between Studio 1854 and WaterAid.