Two-thirds of women feel uncomfortable openly carrying their sanitary products to the toilet in public, and around half wouldn’t feel confident to tell their dad or a male boss about period pain or PMT, according to new research released by WaterAid.

The international charity asked over 2,000 women aged 18 and over about their attitudes towards menstruation and the results show that even today when so many other taboos have been broken, the majority of women feel uncomfortable being open about periods. Based on the results, WaterAid has produced an undercover film capturing the public’s awkward reactions to people talking about periods. Watch the film:

To mark Menstrual Hygiene Day on 28 May, WaterAid is confronting taboos around periods and calling for #noshame in periods while highlighting the issues faced by the one in three women worldwide who do not have access to a toilet during their period. Many girls miss class and drop out of school due to a lack of toilets at school in developing countries.

The survey shows that hiding tampons up your sleeve or taking your whole bag into the toilet at work is probably common as 65% of women say they would feel uncomfortable carrying sanitary products openly to the toilet. And whilst younger generations may have shed other hang-ups of their parents, they are still as coy about toting tampons or towels with 63% of 18 – 24 year olds saying they would feel uncomfortable compared with 65% of 45 – 54 year olds. 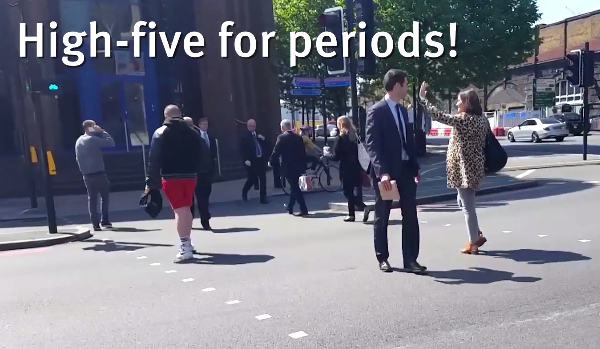 Nearly half of women (47%) would feel uncomfortable talking to their dad about period pain, and 49% wouldn’t feel comfortable confiding in them about pre-menstrual tension (PMT). The younger generation is slighty less embarrassed about confiding in their fathers, with 40% 18 – 24 year-olds saying they would feel uncomfortable talking with them about period pain compared with 48% of 45 – 54 year-olds. 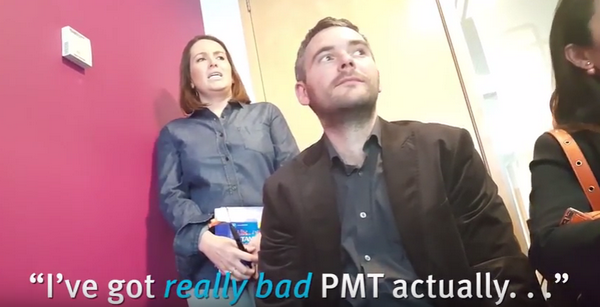 However, 64% of men would leave a sanitary product on the ground if they saw a lady drop it in the street; 36% of men would pick it up and run after the lady. Younger men are more likely to retrieve a dropped tampon, with 41% 18 – 24 year-olds saying they’d pick them up compared to 33% men aged over 55.

“Every day, 800 million women around the world have their period, yet many consider it embarrassing and taboo. Unless we can all talk about periods openly, whether we are a teenage girl in Timor-Leste or a government minister, we won’t be able to make sure that women and girls have the decent toilets and sanitary products they need.

“One in three women around the world do not have access to a toilet during their period. When there are no safe, private toilets in schools, girls often miss school during their period, or drop out of school altogether once they reach puberty. We need to talk openly about this issue to remove the silence and stigma that surround periods and help enable all communities to have the right understanding of good menstrual hygiene practices. Most of all we need to ensure that every women and girl has access to water, safe toilets and somewhere to wash by 2030.”