In Nigeria, 57% of the population – more than 117 million people – still lack at least basic sanitation while more than 38 million practise open defecation. 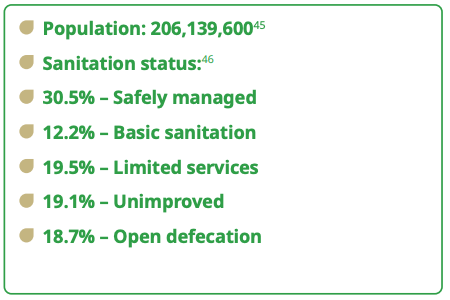 The most populous country in Africa, Nigeria is facing rapid population growth and urbanisation In 2018, the Government declared a State of Emergency in WASH and went on to launch its National Action Plan, which aims to ensure universal access to sustainable and safely managed WASH services for every Nigerian by 2030. In the last five years, access to basic sanitation services has increased, but progress is slow. A study by WaterAid in Kano City found 75% of sanitation workers do not use any PPE. While sanitation workers were not specifically told to stop working during the national lockdown between March and September 2020, they were restricted in their ability to move about freely to carry out their work. 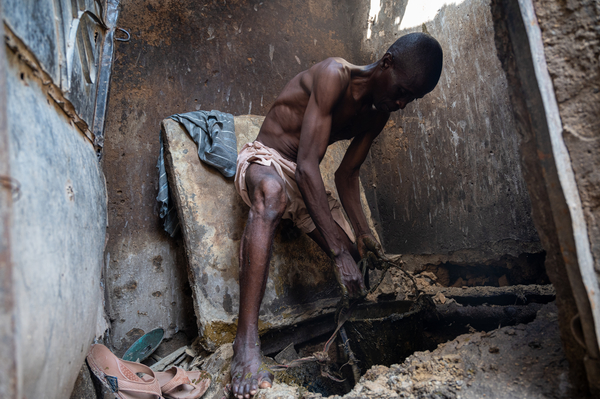 Iliyasu Abbas has been employed as a pit latrine and septic tank emptier for 28 years. He supplements his work with farming but says the pandemic has drastically reduced his income and ability to care for his two wives and eight children. He empties faecal sludge manually using drums, buckets, diggers, shovels, ropes and a scooping container. He wasn’t given any extra PPE or training to protect himself against COVID-19 and says he doesn’t even know where he could access a vaccine. He says,

We don’t use PPE of any kind; we use the normal working cloth we put on our body. Our biggest belief is that God is the one protecting us whether we use PPE or not. The major risks we face during our work are harassment, injury, loss of a limb or our lives.

He has been cut several times by objects inside the pits like a broken bottle or needle and says he’s also been injured on several occasions. “About two years ago, while emptying a pit at night, a concrete block from the toilet structure broke off and fell on my head.”

Auwalu Rabi’u is a faecal sludge transporter from Kofar Dawanau in Kano State. He is married with two children and has been a sanitation worker for 16 years. He inherited the job from his father and is currently Chairman for the local Sanitation Workers Association. He says the biggest challenge he faces doing his job is harassment from road traffic officers and clients refusing to pay, but he also recognises the risks he and his colleagues take. “There was a time I stepped on a broken bottle which cut deep into my leg.” He also knows others who have died at work,

A few years ago a worker died entering into a pit after being tasked to retrieve some money and a phone that someone had dropped inside. He was halfway into the pit when he suffocated from the fumes.

Auwalu isn’t given any protective clothing and doesn’t wear any PPE because he cannot afford to buy it. Instead, he pours kerosene on the waste to mask the smell and relies on his faith, hoping God will protect him. During the pandemic, he bought himself a face mask but received no extra training or support to tackle COVID-19 from his employers. During the first wave of the pandemic, he couldn’t go to work which meant his income was drastically reduced and he had to borrow money to provide for his family.