India, the world’s fastest growing economy, is also the worst country in the world for urban sanitation, WaterAid’s State of the World’s Toilets 2016 report reveals. Despite the government’s campaign to make sanitation a priority, India’s towns and cities are growing at such breakneck speed that the number of urbanites living without sanitation is growing each year.

WaterAid’s second-annual analysis of the world’s toilets, ‘Overflowing Cities,’ examines the state of city sanitation around the world, an issue becoming more pressing as two-thirds of the global population are expected to live in towns and cities by 2050.

India ranks top for having the greatest number of urbanites living without a safe, private toilet - 157 million - as well as the most urban dwellers practising open defecation - 41 million. The problem is so big that the daily waste produced on the streets of India’s towns and cities is enough to fill eight Olympic-sized swimming pools, or 16 jumbo jets, with poo, every day. As cities expand the numbers of urbanites living without basic sanitation has swelled by 26 million since the year 2000.

Among the other findings:

• War-ravaged South Sudan, the world’s newest nation, is the worst country in the world for urban sanitation in percentage terms. An estimated 84% of urbanites have no access to a toilet and every other urban-dweller there practises open defecation.
• Africa’s biggest economy, Nigeria, is falling furthest behind in reaching its urban population with a toilet. For every urban dweller reached with sanitation since 2000, two were added to the number living without, an increase of 31 million people in the past 15 years.
• Fast-growing China is making the most progress in reaching its urban population with sanitation. It’s managed to build toilets faster than the pace of new arrivals, reaching 329 million people since 2000, and outpacing population growth by 9 million.
• In the Asia Pacific region Indonesia is the fourth country globally with the most urban-dwellers without safe, private toilets by numbers (38 million) and second to India with the most urban-dwellers practising open defecation (18 million). Pleasingly Vietnam (fourth) and Cambodia (ninth) are amongst the ten most-improved countries for reaching the most people in urban areas with safe, private toilets. 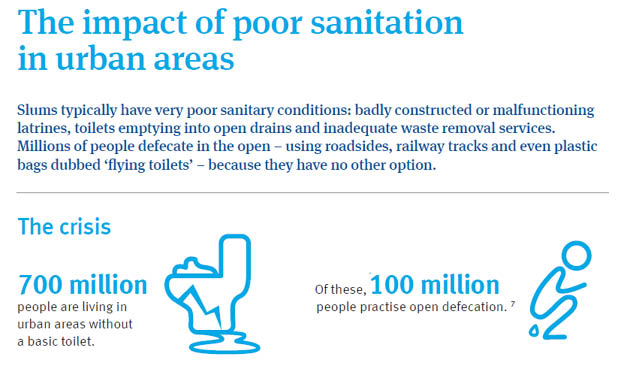 The report examines the problems facing more than 700 million urban dwellers around the world living without decent sanitation. An estimated 100 million of these have no choice but to defecate in the open - using roadsides, railway tracks and even plastic bags dubbed ‘flying toilets’.

The high population density of urban areas means that diseases spread fast in the absence of good sanitation. One child dies every two minutes from diarrhoeal diseases caused by dirty water, poor sanitation and hygiene. Globally 159 million children under five have their physical and cognitive development stunted; many of such cases are caused from repeated bouts of diarrhoea attributed to dirty water, poor sanitation and lack of hygiene.

“More people globally live in cities than outside of them. Our cities should enable healthy lifestyles, have good infrastructure and provide opportunities for residents to prosper. But unfortunately one in five people living in a town or city today still do not have access to a toilet, the majority of them live in overcrowded, rapidly expanding slums. Beyond the humiliation and health risks posed to people living in slums, the lack of sanitation threatens not just the urban poor but the health and security of entire cities and the world.”

“WaterAid’s latest ‘State of World’s Toilets’ report has exposed several countries for failing to make progress in providing urban sanitation, despite their rapid economic growth. Often politicians prefer to invest in roads and other visible infrastructure and neglect the dirty issue of sanitation. But good sanitation is essential to public health. Every town and city in the world needs to prioritise providing safe sanitation services to all the population in order to create a healthier, more sustainable future.”

• Everyone living in urban areas, including slums, to be reached with a toilet to ensure public health is protected
• More money, better spent from governments and donors on sanitation, clean water and hygiene for the urban poor
• Coordination from all actors in the sanitation chain including governments, city planners, NGOs, the private sector, informal service providers and citizens
• Sanitation workers to be given the respect they deserve with stable employment, safety and decent pay. Without them healthy communities and cities are impossible. 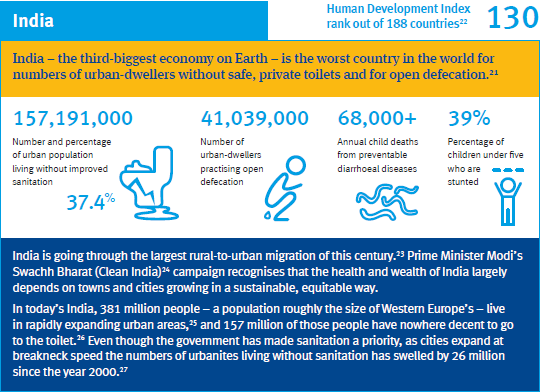