Shoot goals for the world’s poor

Did you know that 1 in 10 people worldwide don’t have access to safe, clean water? That’s why this April, WaterAid, in partnership with Netball Victoria, is excited to launch the first ever Goals for Water Challenge, where netballers can help provide lifesaving safe water to women and girls living in some of the world’s poorest communities.

Did you know that 1 in 10 people worldwide don’t have access to safe, clean water? That’s why this April, WaterAid, in partnership with Netball Victoria, is excited to launch the first ever Goals for Water Challenge, where netballers can help provide lifesaving safe water to women and girls living in some of the world’s poorest communities.

Netball team members choose one match between 11-30 April and challenge their teammates to dedicate their Goals for Water, getting sponsored for each goal scored during the match to raise money and help provide lifesaving safe water to some of the 650 million people worldwide without it.

Melbourne Vixens player and WaterAid Ambassador Liz Watson says, “I’m so excited to get behind WaterAid’s Goals for Water campaign in April. I love the fact that by scoring goals in your netball match, you and your teammates can raise money to help people in some of the world’s poorest communities have access to safe, clean water – that is something we can all be proud of within our netball community.”

Liz Watson recently visited WaterAid projects in Papua New Guinea. “It was fantastic to meet people in Papua New Guinea and see the difference having access to clean, safe water makes to the community,” says Liz. “The health and wellbeing of young women around the world is something I am extremely passionate about. Sport is a vehicle that encourages self-esteem and leadership, while water, sanitation and hygiene are vital to improving health, reducing poverty and ensuring girls stay in school.”

“Safe water is essential for life and good health, yet 650 million people worldwide don’t have access to it. Can you imagine not having safe, clean water to drink whilst playing netball? It’s hard to imagine, yet this is the reality for many around the world,” says WaterAid Australia Chief Executive Paul Nichols.

“Everyone, everywhere should have access to safe water, sanitation and hygiene. These basic services underpin health, education and livelihoods, and are central to eradicating extreme poverty.”

The funds and awareness raised through the Goals for Water Challenge will help communities across the Asian Pacific region, including programs in our neighbouring countries Timor-Leste, Papua New Guinea, the Solomon Islands and also Cambodia.

To reward the fundraising efforts of Goals for Water participants WaterAid has teamed up with fantastic sponsors to offer some great prizes. Netball Victoria members that raise over $1,000 as a team will go into the draw to win a one hour coaching clinic with Liz Watson at their home club. The highest fundraising team will win a pair of EMU Australia boots each, and the following three highest fundraising teams will win a set of fully customised BLK Pro Dresses.

To get involved and to find out more please visit: www.goalsforwater.org.au Registration is free.

What: WaterAid’s Goals for Water Challenge
When: 11-30 April 2016
Who: Netballers can help transform the lives of the poorest and most marginalised people by dedicating their Goals for Water to improve access to safe water, sanitation and hygiene.
Why: Over 650 million, or one in ten, do not have access to safe water and 900 children die every day from diarrhoea caused by unsafe water and poor sanitation.
How: Register now at www.goalsforwater.org.au 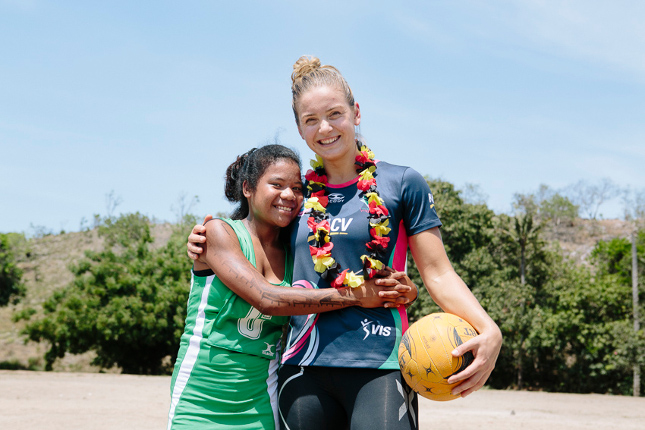