‘There was no escaping from the earthquake’: Nepal one year on

When the first of two huge earthquakes hit Nepal in April 2015, our Nepal Country Representative, Tripti Rai, and her family were caught up in the devastation. Here she shares her experiences and explains how, a year on, your support is helping some of the hardest-hit communities begin to rebuild their lives.

A year ago today, the first of two huge earthquakes hit Nepal. Together, they caused widespread destruction, setting back the country’s efforts at lifting its people out of poverty by years.

It’s not an experience I find easy to recall. Now, as I look back, I realise I was petrified - in total shock as my apartment started to rock like a boat on a stormy sea, surrounded by loud noise that felt like giant roaring machines.

It was a Saturday, and I was home with my husband, my mother and my 20-month-old baby.

I could see the walls start to crack, and cement rained from the ceiling and walls after a few seconds. The shaking didn’t stop and it started to feel like the house was going to crumble, so we ran outside. 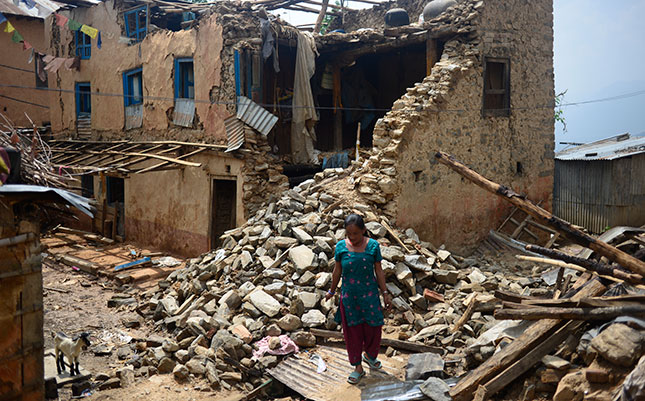 A woman walks through broken houses in the village of Lamatole, Bhaktapur district, May 2015.
WaterAid/Ravi Mishra

But there was no escaping from the earthquake. Even as we stood in the open fields there were continuous waves under the earth. I remember the grey clouds that suddenly covered the sky and the chilly wind around us.

As I held my baby tight and huddled close to my Mum, I could see the fear, shock, panic and helplessness on everyone’s faces.

And while the first earthquake was scary, what was petrifying were the continuous and strong aftershocks that continued for months.

Responding to the immediate need – thanks to you

The earthquake affected WaterAid’s staff, our partners and the communities we work with.

In total, around half of all the districts of Nepal were hit. The disaster claimed more than 9,000 lives and injured thousands more.

Ten of our 36 projects were seriously impacted. Several of our staff’s houses were damaged or, as in my case, destroyed, and many of us lost belongings.

WaterAid is not an emergency organisation, so we found ourselves in a challenging situation.

But incredibly, with the help of our global team – and donations from amazing supporters like you – we were able to respond to the immediate, critical need for safe water and sanitation.

We worked with our partners in 11 districts to provide water purification tablets, to rehabilitate damaged water supplies and to set up temporary community and household toilets. 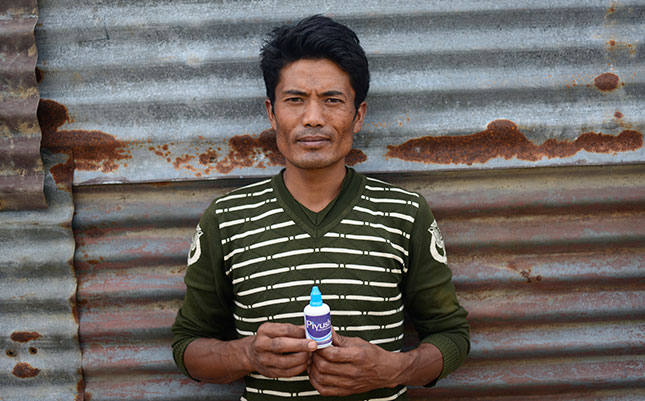 We distributed hygiene kits with awareness-raising activities, including information for women when they had their period – a huge challenge after a disaster.

We also promoted hygiene messages in all the affected districts through community radio networks, and supported the Child Health Division of the Ministry of Health by sharing these messages at the immunisation camps set up for children under five after the earthquake.

Your incredible support meant that, as a result of our initial relief work, we were able to reach over 160,000 people.

But 12 months on, there is still much more to do.

The earthquake has added to these numbers, and in recent months the country has been hit by political dissent, a crippling economic blockade and an acute fuel crisis that lasted for more than four months.

The subsequent disruption to daily life has hampered the pace of recovery. But, despite the huge challenges, our local partners have continued to make significant progress, as this video shows:

We’ve set up long-term recovery plans in four of the hardest-hit areas where we work, including Simjung in the northern Gorkha district, close to the epicenter of the first earthquake.

‘People are at the heart of what we do’

Despite the challenges, we felt amazing connectivity throughout this crisis, which demonstrated WaterAid’s commitment to responding to the needs of the people it works with and to taking care of its staff.

It goes to reaffirm that people are at the heart of what we do.

That’s why, on behalf of all my colleagues in WaterAid and our partners, I would like to thank you for standing by us, and with us, through this arduous yet inspiring journey.

With your support, we’re determined to regain momentum in achieving our long-term goal, of reaching everyone everywhere in Nepal with taps and toilets.