Teams from Melbourne Water, Who Gives A Crap and WaterAid will compete to build the world’s tallest toilet roll tower at Melbourne Water’s offices on Friday 18 November at 10am in the lead up to World Toilet Day on 19 November.

Will they beat the record of 28 rolls or will the towers crash to the ground?

2.3 billion people around the world don’t have access to a safe toilet and almost 900 children die every day from diarrhoea caused by unsafe water and poor sanitation. The record attempt aims to raise awareness of these important issues.

WaterAid’s State of the World’s Toilets report ‘Overflowing Cities,’ which examines the state of city sanitation around the world, will be launched at the event.

“More people in the world have a mobile phone than a toilet,” said Ms Rosie Wheen, WaterAid Australia Chief Executive.

“One in three of the world’s population don’t have access to a safe toilet. It’s a topic that can be hard to discuss, so this November WaterAid wants to get everyone talking about toilets.”

“Asking Australians to focus on toilets for a whole day may seem funny. But for millions of people around the world it's no laughing matter. Many people have no choice but to face the indignity of going to the loo in the open, where they are exposed to disease and vulnerable to harassment and attack,” said Ms Wheen.

“As caretaker of Melbourne’s wholesale drinking water and sewerage infrastructure we know how important access to safe, clean water and sanitation is for healthy people, places and environment. Melbourne Water is thrilled to participate in this event and support World Toilet Day,” said Ben Furmage, Melbourne Water General Manager Customer and Strategy. 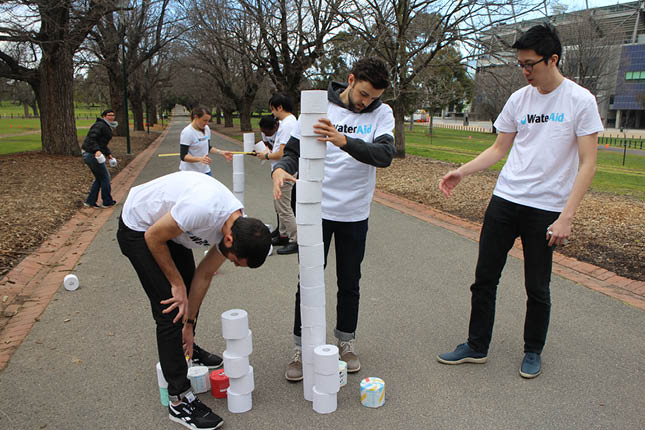 Melbourne Water removes and safely treats over 320,000 million litres of sewage each year – enough to fill 128,000 Olympic-sized swimming pools – and is a long-time supporter of WaterAid.

Toilet paper retailer Who Gives A Crap looks after our bottoms and donates 50 percent of its profits to WaterAid.

“We think it’s crap that billions of people in the world don’t have a toilet. That’s why we donate 50 percent of our profits to help fund sanitation and hygiene projects for those in need and that’s why we want to build the world’s tallest toilet roll tower this World Toilet Day,” said Who Gives A Crap Co-Founder Simon Griffiths.