We built this city on toilet roll

From Sydney to London, Toronto to Timbuktu; cities from across the globe have been reimagined - using humble toilet rolls - in a special art work for WaterAid to mark World Toilet Day on Saturday 19 November.

Armed with just a pair of scissors, glue and tweezers, Paris-based artist, Anastassia Elias, 40, has created 10 mesmerising tiny cityscapes inside toilet rolls to raise awareness of the 2.3 billion people – one in three of the world’s population – who do not have access to a safe, private toilet.

The toilet roll cities have been created alongside the release of ‘Overflowing Cities’ - WaterAid’s State of the World’s Toilet Report 2016 - which this year examines the state of city sanitation around the world.

More than 700 million people in towns and cities across the world are living without decent toilets. Around 100 million of these people have no choice but to do their business in the open – using roadsides, railway tracks, waste-ground and plastic bags dubbed ‘flying toilets’. As a result, disease can spread quickly.

Elias, who uses paper to build the intricate cityscapes inside toilet tubes, has chosen cities from both developing and developed countries; highlighting the fact that healthy cities are built on good sanitation. The cities she’s depicting are: Sydney, London, New York, Toronto, Tokyo, Stockholm, Bogota, Timbuktu, Dhaka and Agra. 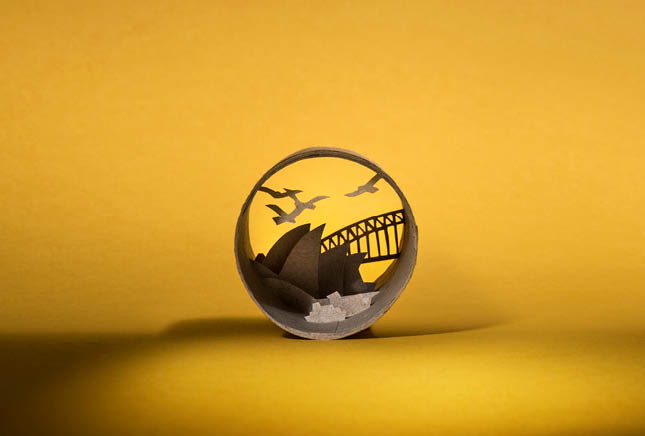 The success of Sydney, London, New York, Toronto, Stockholm and Tokyo is, in part, because they all have safe sanitation systems that protect their inhabitants from diarrhoeal diseases.

However India, the world’s fastest growing economy, has 157 million people living in its towns and cities who do not have access to a toilet and 41 million urban dwellers practicing open defecation; making it the worst in the world for urban sanitation. This not only puts people, especially young children, at risk of potentially fatal disease but has a knock-on effect on the country’s productivity and economic growth. According to the UN, there are nearly 400 slums in Agra with many people living in squalor and without access to basic sanitation facilities.

Meanwhile neighbouring Bangladesh ranks sixth in the world for having the greatest number of urban dwellers - living in cities like Dhaka - without access to a toilet. Of the 700 million urban dwellers living without a toilet worldwide, 23 million of them are in Bangladesh.

“Cities should be a place for sustainable lifestyles offering healthy living, good infrastructure, wellbeing and economic growth. But the reality is that one person in every five living in a town or city today does not have access to a toilet or good sanitation and many live in poverty in overcrowded, rapidly expanding informal settlements. Not only does this lead to a lack of dignity for women and girls and health risks to poor families, this lack of sanitation also threatens the health and security of all city dwellers and leads to pollution of rivers and water sources.”

“I have always enjoyed experimenting with materials that people might otherwise throw away, which is why I started working with toilet rolls; recreating scenes from my surroundings that have inspired me. People sometimes find it surprising that I make art out of such an ordinary, everyday household item but I think their size and my use of perspective helps to draw people in to another world. That is why I am delighted to be working with WaterAid this World Toilet Day to create these tiny toilet roll cities, which I hope will help raise awareness of the staggering 700 million people living in towns and cities across the world without access to a toilet, something which so many of us take for granted.”

• Everyone living in urban areas, including slums, to be reached with a toilet to ensure public health is protected

• More money, better spent from governments and donors on sanitation, clean water and hygiene for the urban poor

• Better coordination from all actors in the sanitation chain including governments, city planners, NGOs, the private sector, informal service providers and citizens

• Sanitation workers to be given the respect they deserve with stable employment, safety and decent pay. Without them healthy communities and cities are impossible