Will you pay to pee on World Toilet Day?

Can you imagine having nowhere to go to the toilet? Or going in the open where people can see you?

World Toilet Day on 19 November will raise awareness of the lack of toilets worldwide, as it’s no joke that 2.3 billion people don’t have access to a decent toilet and that almost 800 children die every day from diarrhoea caused by unsafe water and poor sanitation.

“Did you know that more people in the world have a mobile phone than a toilet? One in three of the world’s population don’t have access to a decent toilet. It’s a topic that can be hard to discuss so this November WaterAid wants to get everyone talking about toilets,” said Ms Rosie Wheen, WaterAid Australia Chief Executive.

Around World Toilet Day in November WaterAid is encouraging people in their workplaces, community groups and schools to Pay to Pee every time they use the loo to help some of the world’s poorest people access sanitation, hygiene and clean water.

Find out more about Pay to Pee and other World Toilet Day activities at: www.itsnojoke.org.au In addition to Pay to Pee, people can hold a comedy night or comedy quiz. 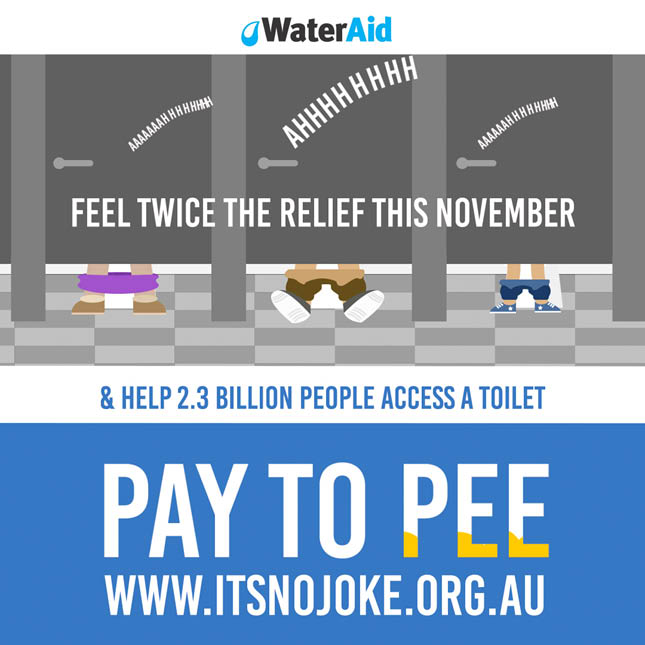 “In Australia having a day all about toilets may seem funny. But for millions of people around the world it's no laughing matter. Many people have no choice but to face the indignity of going to the loo in the open, where they are exposed to disease and vulnerable to harassment and attack,” said Ms Wheen.

Money raised from World Toilet Day fundraising will help give families in the world's poorest communities access to safe water, toilets and hygiene.

“With local people and partners, WaterAid helps the world's poorest communities to build toilets, always making sure it's the right kind of toilet for the local area. We use local materials and low-cost solutions,” said Ms Wheen. “WaterAid campaigns for governments to target their development efforts and spending on sanitation. We know that toilets save lives. Health is improved, fewer days are lost to sickness, and girls stay in school longer.”

What: Pay to Pee or host a comedy night or quiz around World Toilet Day
When: November 2016
Who: Anyone can help transform the lives of the world’s poorest and most marginalised people with safe water, sanitation and hygiene by getting involved in World Toilet Day activities and making a donation.
Why: Over 2.3 billion people, or one in three, do not have access to adequate sanitation and almost 900 children die every day from diarrhoea caused by unsafe water and poor sanitation.
How: Go to www.itsnojoke.org.au
Video: https://www.youtube.com/watch?v=PGIHTfQ9Dvg