On 14 October 2020, heavy rains caused by a deep depression (Known as BOB 02) resulted in severe flooding in many areas of Hyderabad, causing fatalities and bringing life to a crippling halt. Within a few more days, another cyclonic circulation caused similar rains and flooding. The quantum of rainfall as reported was more than 150 mm and in some areas in the city was 190 mm through the day. Following the unprecedented rainfall that resulted in the flooding of low-lying areas, catchments of lakes and the Musi River several secondary impacts occurred – traffic disruption, power supply and human deaths. Visuals depicting the grim situation shocked many people across India. One video from Falaknuma area showed a man being swept away by the gushing water and another showed cars bobbing around like rubber ducks in a bathtub. The city administration admitted that the drainage system could not handle the quantum of rainwater inflows. 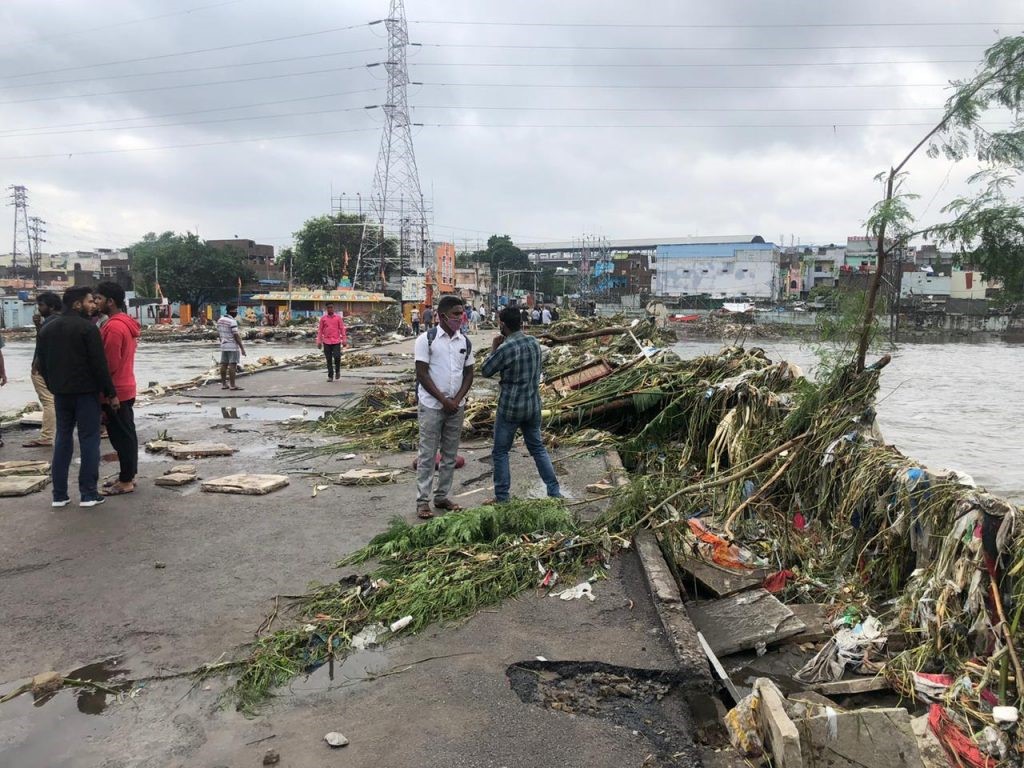 Debris left by the overflowing Musi river after it swamped the Chaderghat bridge in Hyderabad city.

Hyderabad’s urban sprawl and relentless land conversion have fundamentally caused this massive flooding. The major factors responsible for causing the natural disasters like floods are due to the rapid changes in the geomorphological features and land use, such as flattening of hillocks, landfilling, concretisation due to the built-up area, the encroachment of majority of nalas/ stormwater drains/ stream courses/ river and about 169 lakes/tanks in and around the Hyderabad city.  While the overall slope of all the localities in Hyderabad remains more or less unchanged, all the Nalas, storm drains, culverts have been landfilled, built upon or simply filled with garbage preventing water from flowing out of the city. There is an urgent need to understand the hydrological system and manage it systematically along with sustainable land management.  The October rain amplified the paradox of intense rainfall and depleting groundwater levels in the city of lakes.

By way of remedy, the city planners need to look at reclaiming catchment areas of by evolving a plan to remove illegal encroachments and rehabilitate houses on the catchment built in the Full Tank Level - FTL area of about 169 lakes. Nalas, natural stream channels that carry floodwaters from one lake to the next in a catchment area require to be desilted and the natural drainage system and hydrology be restored. Finally, a renewed drive to intensify Roof Rainwater Harvesting (RWH) and stormwater recharge in the city. Coupled with other simple design improvements such as - interlocking brick flooring of open areas & roads to be adopted for in situ recharge and avoid stormwater runoff; implementing recharge trenches on roadsides and open spaces in large houses, school campuses, office compounds and open lawns, parks and gardens – will enhance the benefits of water recharge while alleviating flooding. Needless to say, penal regulatory measures (water supply disconnection) that prevent alterations to hydrology and financial incentives (property tax rebate) that support and sustain the enthusiasm for RWH would be needed to supplement the package of anti-flooding measures.

Hirudia Raj works in the Programme team at WaterAid India and is based out of Hyderabad.

Is God’s own country thirsty?

COVID 19 and the urban poor: Bare need and ways to restore and ensure water supply services