Kachanalli is a semi-urban (or developed?) village close to the highway and the numerous industries that have come up nearby. People here largely work in the factories as daily wage workers or employees. Some have farms and do cattle rearing as well. However, the daily struggle for clean sufficient water was a problem that persisted for years.

“Before marriage, I used to get up early every day to collect water from the borewell supplied at 5am in the morning. They gave five pots of water per family. And to get that five pots of water, I had to stand in long queues due to which my morning schedule and household work went haywire. I could not do other things”, said Usha (26 years) who is now a member of the Village Health Sanitation and Nutrition Committee (VHSNC) and Self Help Group (SHG) as well.

Padma (42 years), who is also a VHSNC and SHG member, remembers a time 10-15 years back when she had to walk one kilometre every day to fetch water even when she was pregnant. They both joined the VHSNC because they did not want others to face the daily problems they have faced in their lives.

Swami Vivekananda Youth Movement, WaterAid India’s partner in the region undertook a few activities in the village post an on-ground need assessment such as repairing and restoring pipelines, providing a higher capacity motor for the borewell, implementing an integrated water supply system in the school aanganwadi and government lower primary school, training volunteer WASH promoters to promote better hygiene and sanitation practices across the village, and strengthening the defunct VHSNC. Post various meetings, discussions with the community, and trainings with SHG members, 15 people (eight women and seven men) volunteered to form the new VHSNC including Usha and Padma. 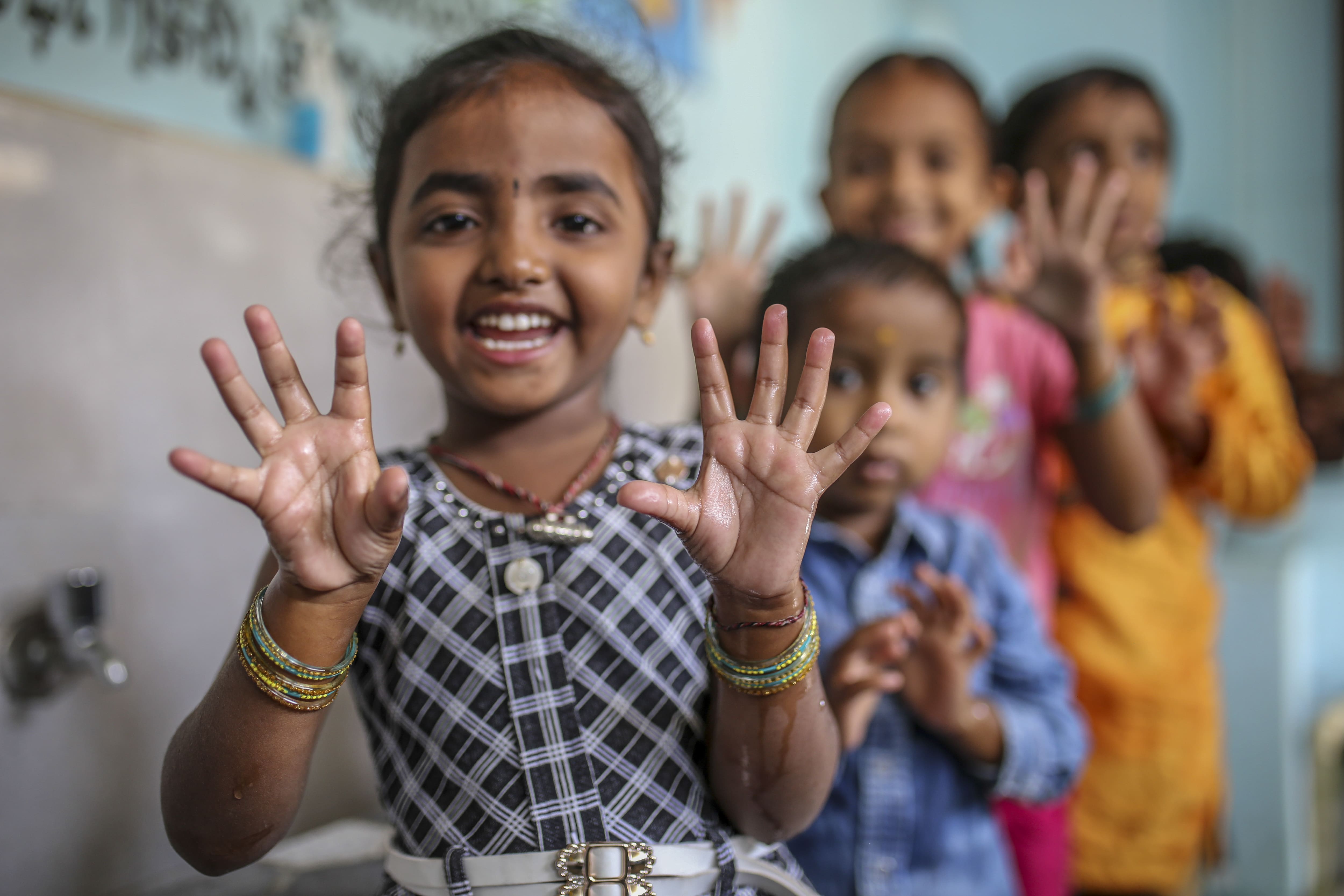 As mandated, the VHSNC members are responsible for looking after the hygiene and sanitation situation and issues in their village. But here they are actively involved in solving any issue faced by the people as well as the village. They list down all the major and minor work that are required to be done in the village. They attend to individual complaints related to water supply and decide on what can be done for the major issues such as waste segregation and solid waste management. They have even gone beyond their scope of duty and are now helping old people get their pension, others with getting their ID cards or ration etc. They are currently encouraging people to recycle grey water, compost kitchen waste, and also build rainwater harvesting structures.

“We have implemented all of this at home first – following hygiene practices as trained by SVYM like ensuring that everybody wash their hands after toilet usage, wearing shoes to the toilet, recycling grey water, waste segregation etc. We also built a rainwater harvesting structure with storage tank of 12000 litres in August 2018. But we had an issue with the connection to the storage tank which got resolved with SVYM’s help recently. If we don’t implement the good practices that we have learnt, how can we ask others to change?” says Usha emphatically.

All the hard work put by Usha, Padma and other VHSNC members seems to be bearing fruit. A neighbour has also put his own money (INR 20,000/-) to build a rainwater harvesting structure. Only the connection to the filter and tank is pending. Everybody is waiting to see the result from this structure. If convinced, they are willing to construct a similar structure in their homes. Everybody is now waiting for the winter rains to come!

The small school building is almost hidden by the lush green foliage and sense of calm prevails within the school compound. It is one of the few schools with a comparative large compound for the children to run around as well as lots of trees and plants to make it beautiful and inviting. This is also the school which has won the Kannada Rajyotsava Award under the Best School category in November 2019. The school’s Headmaster, Mallikarjuniah, attributes this success to Swami Vivekananda Youth Movement’s (SVYM), WaterAid India’s partner, efforts at improving the school’s infrastructure and thereby the teaching-learning experience. 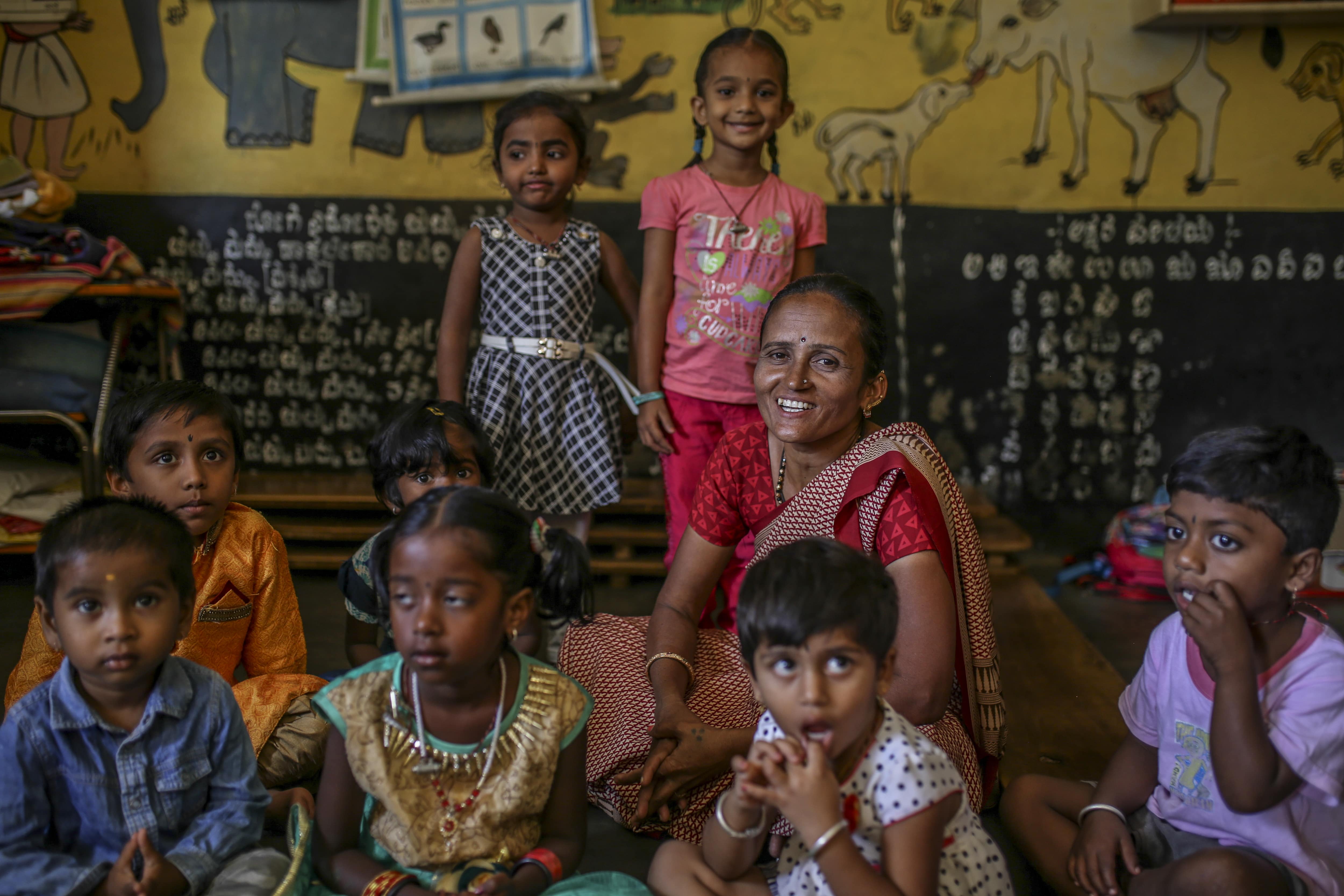 Machonayakanahalli is a hamlet/habitat with only 52 households. The community here practice agriculture and cattle rearing for their livelihood. Many industries have come in the vicinity and along with it, many families from outside the area or state. Most of the students in the Government Lower Primary School are children who are originally not from the village and hence speak many languages. The Government Lower Primary School, like many other schools in the region, faced issues related to water supply and storage as well as lack of awareness about hygiene and sanitation.

The groundwater level here has gone down to 1200-1500 ft. from 200-300 ft. in the last decade due to multiple factors such as less rainfall, no groundwater recharge, eucalyptus plantations and new industries. The lake nearby is largely dry throughout the year except during the monsoon season when it fills up a little with water. The government attempted to put a borewell next to the lake three or four times, but each time it would operate for a few months before running dry due to insufficient depth. As a result, the water supply to the school as well as households in the village got affected. Children had to fetch water from private borewells outside the school. Water supply during summer was a huge problem with groundwater running dry further.

SVYM after accessing the situation decided to first improve the water supply to the village by putting a new borewell at an appropriate depth. Then it constructed a rainwater harvesting structure in the school, increased the size of the underground storage tank (sump) to hold 5000 litres of water, built recharge pits and a hand wash unit, and repaired the pipeline connection to the borewell water supply.

“Now there is enough water for children, kitchen, as well as the school garden. There are so many medicinal plants here…..earlier we could not maintain the garden well because there was hardly enough water for the children and the kitchen”, said the happy Headmaster.

Mallikarjuniah soon came out with a newspaper cutting which mentioned that Budihal Gram Panchayat (which was the GP for Machonayakanahalli as well) recently won the State Government Gandhi Grama Purashkar (Award) of INR 5 lakhs due to its support to the implementation of SVYM’s work in 16 villages. “Due to their good work, we were also able to get the Best School award,” said Mallikarjuniah.