On this World Toilet Day, 19 November, WaterAid India is calling on central and state governments to commit to delivering universal access to sanitation following the release of a new report showing which countries in the world have the worst rates of access to safe, private toilets. WaterAid’s first “It’s No Joke – State of the World’s Toilets” report reveals the hardest places in the world to find a toilet, where you’ll find the most people waiting, and which developed nations are facing their own challenges on sanitation. The world’s youngest country, South Sudan, has the worst household access to sanitation in the world, followed closely by Niger, Togo and Madagascar the report reveals. 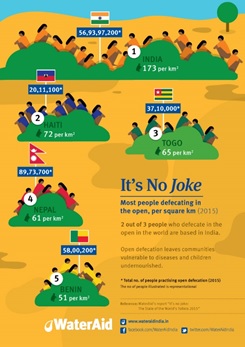 Access to safe sanitation, and ensuring that everyone in a community uses a toilet, is key to better health and an important measure in addressing undernutrition linked to chronic diarrhoeal illnesses.

The report highlights the plight of more than 2.3 billion people in the world who do not have access to a safe, private toilet. Of these, nearly 1 billion have no choice but to defecate in the open – in fields, at roadsides or in bushes. The result is a polluted environment in which diseases spread fast. An estimated 314,000 children under five die each year of diarrhoeal illness which could be prevented with safe water, good sanitation and good hygiene. Many more have their physical and cognitive development stunted through repeated bouts of diarrhoea, blighting their life chances. India now has 60.4% of its people without access to safe, private toilets. Since 1990, access has improved by 22.8 percentage points, putting it at 7th out of eight countries for improvement in South Asia, of countries for which data is available. In South Asia, Nepal has seen the most improvement, followed by Pakistan and Bhutan.

Among the report’s other findings:

As we observe yet another World Toilet Day, more than 140,000 children younger than five years continue to die each year in India from diarrhoea and nearly 40% of our children are stunted. The Swachh Bharat Mission has the highest political commitment driving it but lot needs to be done still to make India truly open defecation free. The commitments need to go beyond just the construction of toilets to focus on other critical aspects like collective behaviour change, hygiene and technology intervention. Education to change people’s attitudes towards sanitation is crucial if we are to realise the full health and economic benefits of sanitation. 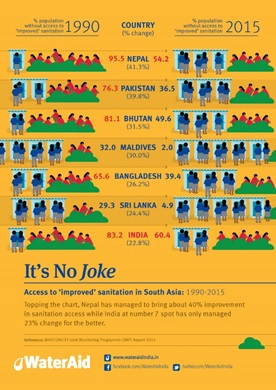 AWS Teams with Water.org and WaterAid to Provide Water Resources Across India