A Water Campaign by Banda District Administration, WaterAid India and the Community creates a Limca Record

‘Bhujal Badhao Payjal Bachao’ (Enhance Ground Water, Protect Drinking Water) campaign on water was recognized by the Limca Book of Records in February 2020 for ‘most contour trenches built and most jal chouplas conducted’ - construction of 2605 contour trenches, around 260 wells and 2183 hand pumps across 8 blocks and 470 Gram Panchayats creating additional 110001 cubic meters (or kilo litre) per annum of water recharge capacity and around 2443 drinking water sources (handpumps and wells). 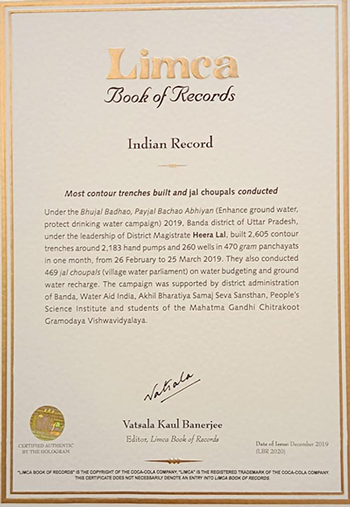 Banda/Lucknow/New Delhi: The usually arid and drought prone district of Banda in Bundelkhand region recently became a shining example of how community led action supported by right planning and technical assistance and a collaboration between the District Administration and a non-profit WaterAid India can result in clean drinking water being accessible for everyone along with source sustainability for this parched region.

The stellar results of the campaign on water launched in 2018 called ‘Bhujal Badhao Pay Jal Bachao’ (Enhance Ground Water, Protect Drinking Water) conceptualized and implemented by the District Administration of Banda and WaterAid India to bring back water security in the region has been duly recognized by the Limca Book of Records for ‘most contour trenches built and most Jal Chouplas conducted’.

Led by Heera Lal, District Magistrate, Banda, the campaign launched in February 2019 is  a first-of-its-kind of community engagement, using Jal Choupals at a district wide scale covering all the Gram Panchayats in a district for mass mobilization and action on water conservation, recharge of ground water, rainwater harvesting and mass awareness campaigns.

Banda has historically shown a high seasonal fluctuation of water availability in wells. A study published in 2015-16 showed that 71% wells in the districts had water depletion. Following this a structured tool of Water Budgeting using Jal Choupals (local governance) model towards democratization of water developed by WaterAid India was employed by the district administration.

The focus of the campaign was to mobilize and involve the people of Banda with the district administration in reviving neglected sources of water to rejuvenate and recharge groundwater thereby improving groundwater levels. The model of Jal Choupals resulted in triggering community action and volunteering through Shramdaan (free physical labour) in villages for the digging of community trenches and construction of rainwater harvesting structures.

The campaign was divided into three phases. In the first phase from February to March 2019 was the preparatory or foundation phase a core group was formed to run the campaign and resource persons especially from the community were trained and work on restoration and digging started. Phase two from April to July 2019 saw the community taking charge and getting into action to volunteer and implement the campaign to protect drinking water sources and enhance ground water through various water recharge initiatives. Phase three was about setting up rooftop rainwater harvesting along with monitoring and assessment of the exercise of the whole campaign.

The community action led to construction of 2605 contour trenches, around 260 wells and 2183 hand pumps across 8 blocks and 470 Gram Panchayats in Banda District. These contour trenches have created additional 110001 cubic meters (or kilo litre) per annum of water recharge capacity and around 2443 drinking water sources (handpumps and wells) in Banda district.

Heera Lal, District Magistrate of Banda during the campaign said:

“More than the record what matters is understanding the need to protect and re-charge water bodies. My effort is to dig ponds and wells in the hearts and minds of people. If the community understand the importance of water bodies and water recharge they will do everything for the upkeep”

The Story of Banda highlights how when the Government of Uttar Pradesh, WaterAid India and the people of Banda came together to address the issue of their water woes, they changed their fate not only for themselves and for the generations to come to be water secure.

‘Bhujal Badhao Payjal Bachao’ campaign is an inspiring example of how a convergent action led by district magistrate involving relevant departments, Panchayats and civil society organisations can motivate and mobilise communities towards ground water recharge and conservation with tangible results and lasting change. The campaign has not been a one off event but a sustained collective action to help Banda better prepared with drought mitigation & resilience to deal with climate change.

WaterAid India along with its partners Akhil Bhartiya Samaj Sevi Sansthan, PSI and MGCG Vishwavidalaya provided the technical support to the campaign.

WaterAid
WaterAid is an international not-for-profit, determined to make clean water, decent toilets and good hygiene normal for everyone, everywhere within a generation. Only by tackling these three essentials, in ways that last, can people change their lives for good. Working in India since 1986, WaterAid has successfully implemented water, sanitation, and hygiene projects, extending benefits to some of the poorest and most vulnerable communities across 13 plus of India’s 29 States. For more information, visit www.wateraidIndia.in, follow @WaterAidIndia on Twitter, or visit us on Facebook.

AWS Teams with Water.org and WaterAid to Provide Water Resources Across India