Nigeria as a country has enjoyed a little over 20 years of uninterrupted democratic leadership after decades of oppressive and corrupt military rule. Unfortunately, the much anticipated dividends of democracy have hardly translated into any meaningful impact in the lives of Nigerians. This is particularly evident in the water, sanitation and hygiene crisis in the country where around 55 million people in Nigeria lack access to clean water, about 160 million live without a decent toilet, 47 million practice open defecation and about 110 million lack handwashing facilities with soap and water. The crisis also extends to institutions as half of all schools in Nigeria lack basic water facilities and 52% do not have basic sanitation services. Similarly, about 50% of hospitals lack clean water, almost 90% are without basic sanitation and 57% lack basic handwashing facilities.

As a response to this crisis and the continued decline in water, sanitation and hygiene (WASH) access despite statutory obligations and commitments by elected officials (‘duty bearers), WaterAid Nigeria in collaboration with her civil society organisation (CSO) partners and the media at national and state levels implemented its second phase of the citizens' engagement project tagged the 'Vote4WASH' Campaign. The campaign leveraged on Nigeria’s 2019 general election to mobilise citizens ('right holders') to effectively demand for the actualisation of their rights to water and sanitation, and further sensitise duty bearers to recognise and fulfill these rights.

Also, designed to be a youth led civic and voter's education campaign, the Vote4WASH initiative had a special focus on the rights of vulnerable groups such as children, people living with HIV/AIDS, youths, women and people living with disabilities. It also leveraged on the valuable resource of the creativity, energy and enthusiasm of young Nigerians in pushing for qualitative change in ways of working, innovation and institutional reforms, including better governance, combating corruption, and building a healthier social and physical environment.

To empower citizens to demand their rights and participate in water, sanitation and hygiene (WASH) decision making

Strengthen capacity of civil society organisations (CSOs), including youth groups, people living with disabilities and the media to mobilise citizens in effectively engaging with political office holders in keeping their campaign promise.

Ensure citizens are better informed and organised to participate and to demand for improved and inclusive WASH services.

Engage political aspirants to provide documented commitments to prioritising WASH service delivery based on citizen demand and Sanitation and Water for All (SWA) targets.

How we did it

Over an 8-month period, from August 2018 to March 2019, the Vote4WASH campaign was implemented in seven states across the geopolitical zones of the country, and the Federal Capital Territory, Abuja. We engaged media partners, advocacy and accountability organisations at state and national levels to amplify the campaign's reach and impact. Partners with reach in key states were supported to implement and influence stakeholders using state-wide media platforms.

Electoral aspirants for gubernatorial, legislative and executive positions were engaged to get commitments on WASH priorities that will be reflected in their governance agendas once elected into office. Media partners provided robust coverage on focus issues at state and national levels and provided platforms for inclusive public engagements between citizens and aspirants. Similarly, through robust and targeted media engagements, citizens were empowered to demand their rights and electoral aspirants were held to account using the pledge cards. 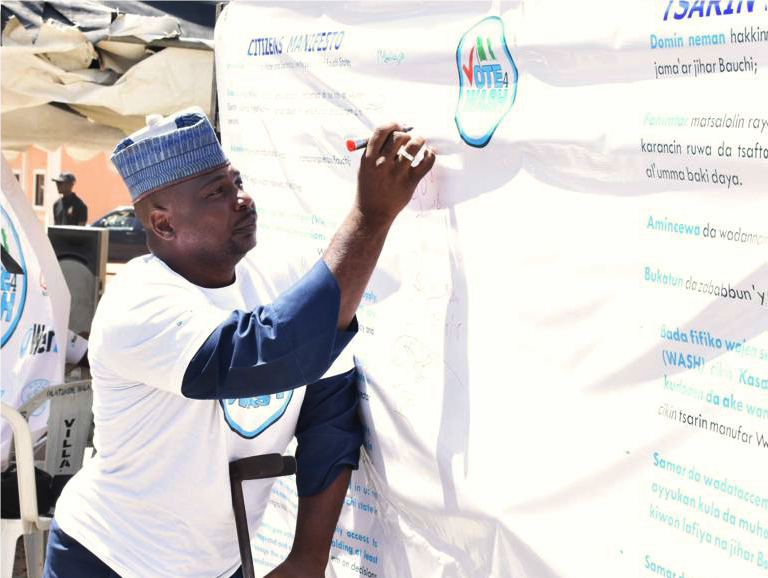 The campaign created a platform to influence high-level stakeholders and secured important political commitments as 120 aspirants signed the pledge cards and 44 of them won across WaterAid focal states (Benue, Enugu and Plateau), Lagos, Edo and Kano. Also, the WASH profile was strengthened as over 5 million people were reached across the states through traditional and social media engagements. Community engagement provided a platform for citizens to interact with aspirants and have a renewed sense of hope and enthusiasm to exercise their newfound negotiating power. The voices of vulnerable groups such as women, people with disabilities and young people were amplified during the campaign. Representatives of these groups were given a platform to participate in developing community manifestoes and demands presented to political candidates. Additionally, the capacity of civil society organisations involved in implementing the campaign was built and in turn led to the implementation of the campaign in their various states. 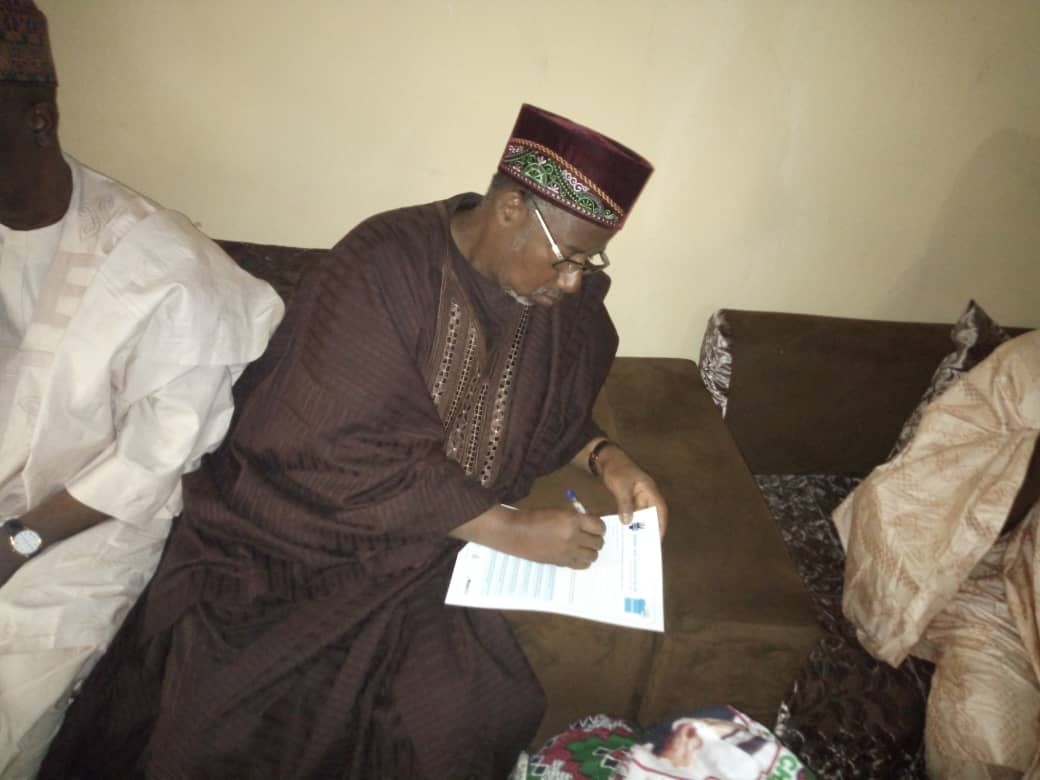 However, the campaign team, together with partners and media across all levels employed innovative ways to make the most of expertise, existing platforms and available resources for best results.

Through the planning and implementation phases of the Vote4WASH campaign, it was very clear that demands for water, sanitation and hygiene (WAS) services were seriously underestimated in communities and online. Also, many Nigerians were eager to be part of the campaign and leveraging on personal connections built over time helped in developing communication and engagement channels outside of the civic space to influential political actors. We also maximised social media tools like WhatsApp, to create supportive networks of civil society organisations (CSOs) across states. Additionally, it was surprising and encouraging to see a lot of capacity in our civil society partners to effectively lead and support one another during campaign implementation. Also, unlike the first edition of the campaign implemented in 2014, it was discovered that working with a broader cross-section of development partners, not only in the WASH sector, can bridge the gap between different electoral advocacy campaigns and amplify the focus and reach.

Wrap up and what next!

The success of the Vote4WASH campaign will be sustained primarily through the Keep Your Promises post-election campaign which will engage CSOs and citizens to track implementation of commitments including increased investment in the WASH sector. The signed pledge cards will be used as a strong tool for community members to hold the elected office holders accountable; continuous media and social media engagements to keep WASH issues in the public domain alongside constant follow up visits to focal local government areas (LGAs) to help with technical support and campaign implementation. 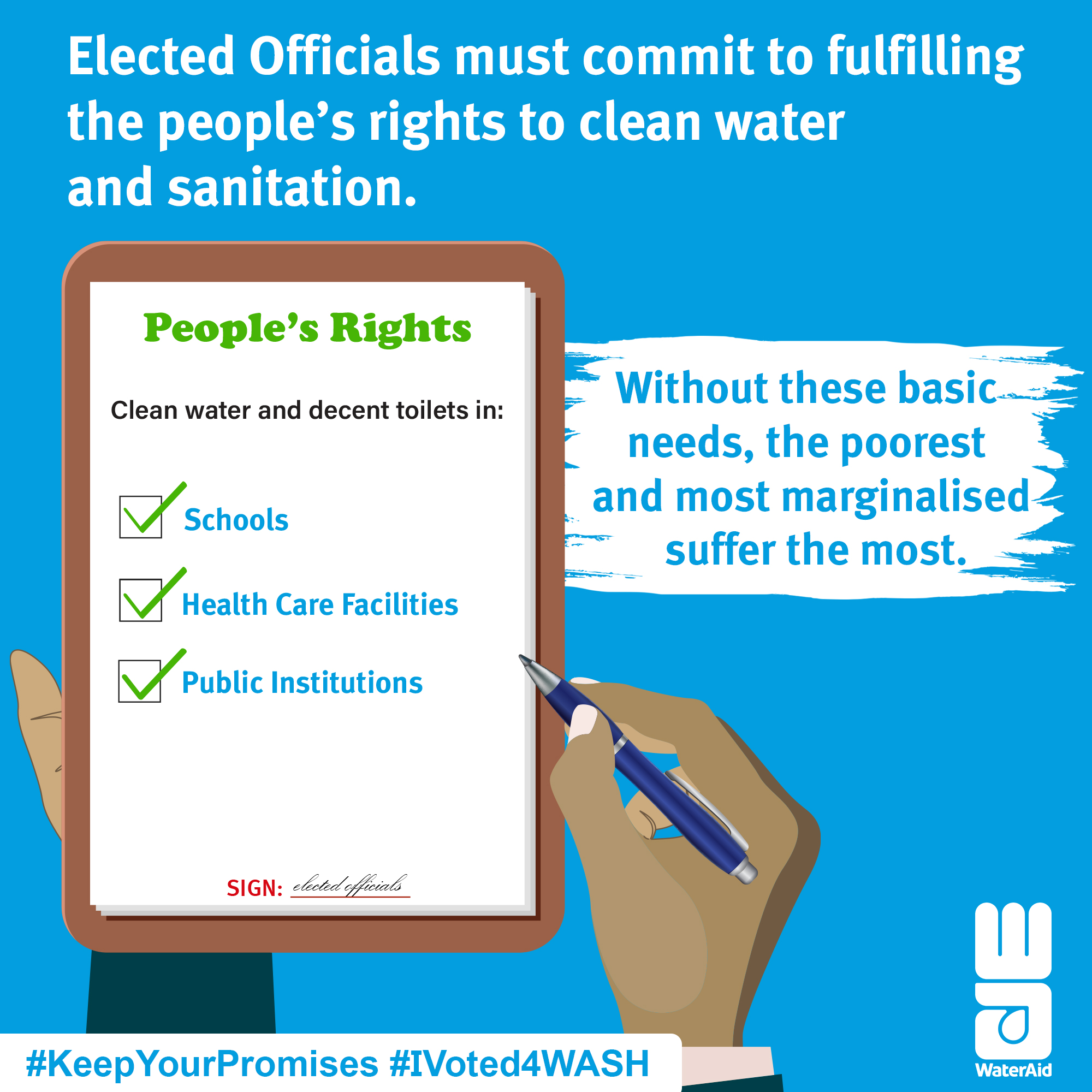