What do becoming a Wimbledon champion and delivering clean water have in common? They both take a team

It takes a team to make a Wimbledon champion, and to make The Championships happen. It also takes a team to bring clean water, decent toilets and good hygiene to a community.

As WaterAid’s Voices from the Field officer based in Nepal, I’m lucky enough to visit villages throughout their journey to clean water – from planning and building the facilities, to the joyous celebrations when the taps are turned on, to the months and years after, when life has transformed.

I can tell you that getting water to a community takes far more than simply installing taps and pipes. And it takes different teams of people, too: government officials, water committees, mechanics, plumbers, community members, teachers and more.

The village of Birtadeurali in Nepal is no different. When I visited them recently, they were just weeks away from having running water gushing from 55 taps across their households.

Until 2015 Birtadeurali relied on a nearby river for water, which was neither safe nor clean. But then in April that devastating earthquake hit, homes and infrastructure were destroyed, and life became even harder: the river dried up and access to clean water became limited at best.

Things began to change when in late 2018, 200 local people gathered and decided to take action. They formed a committee to oversee a project to get clean, running water into the community, with support from WaterAid and a local partner. 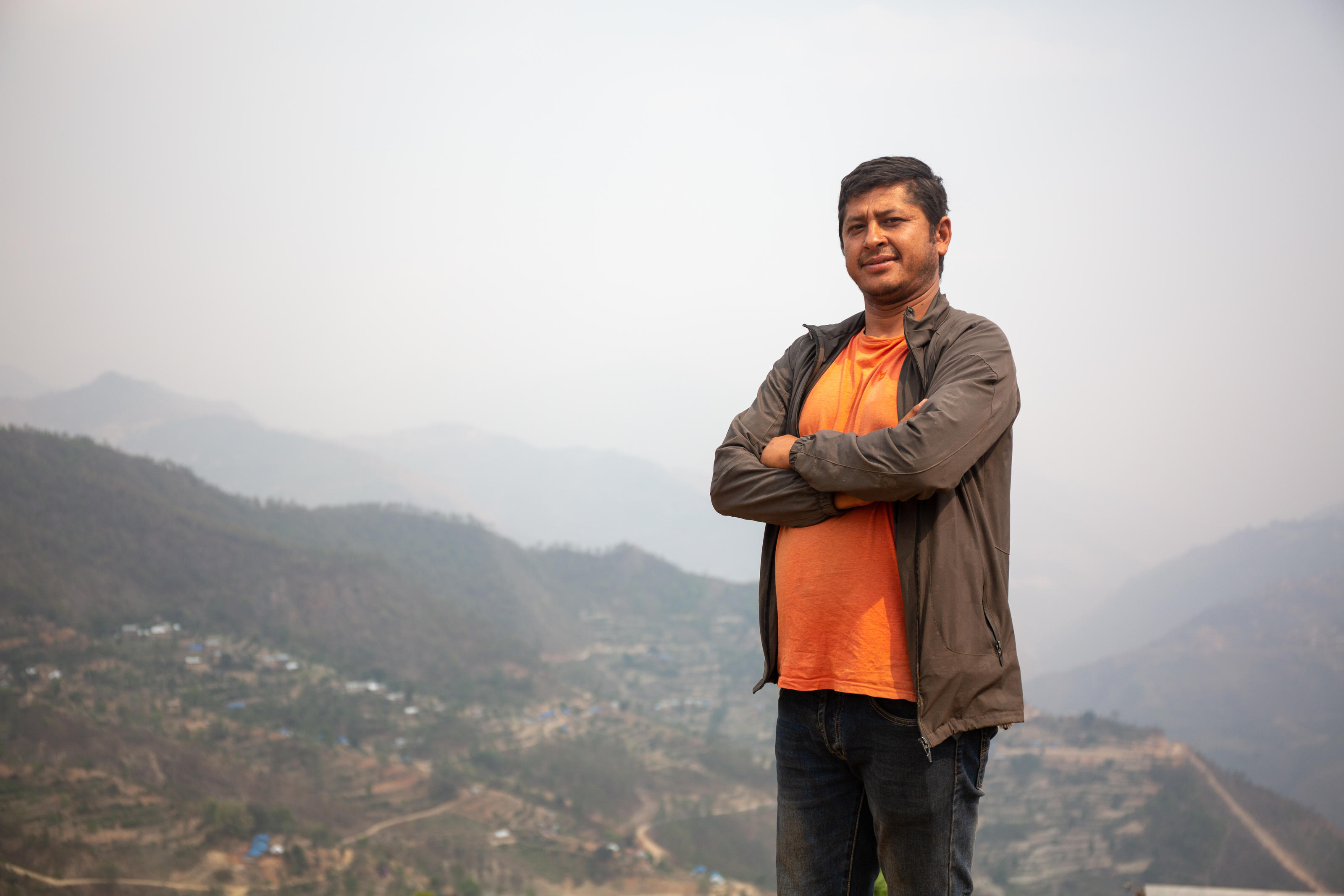 “Being in the committee is really important to me, because we need water and I’m doing some good work for my community.”

Gvani is a plumber, and was one of the people that Kali’s committee approached to help with the construction work.

“My main roles are connecting pipes and fittings, and making sure that the pipes do not have any leakages. I also have to make sure that all the taps run equal amounts of water despite the uneven terrain.” 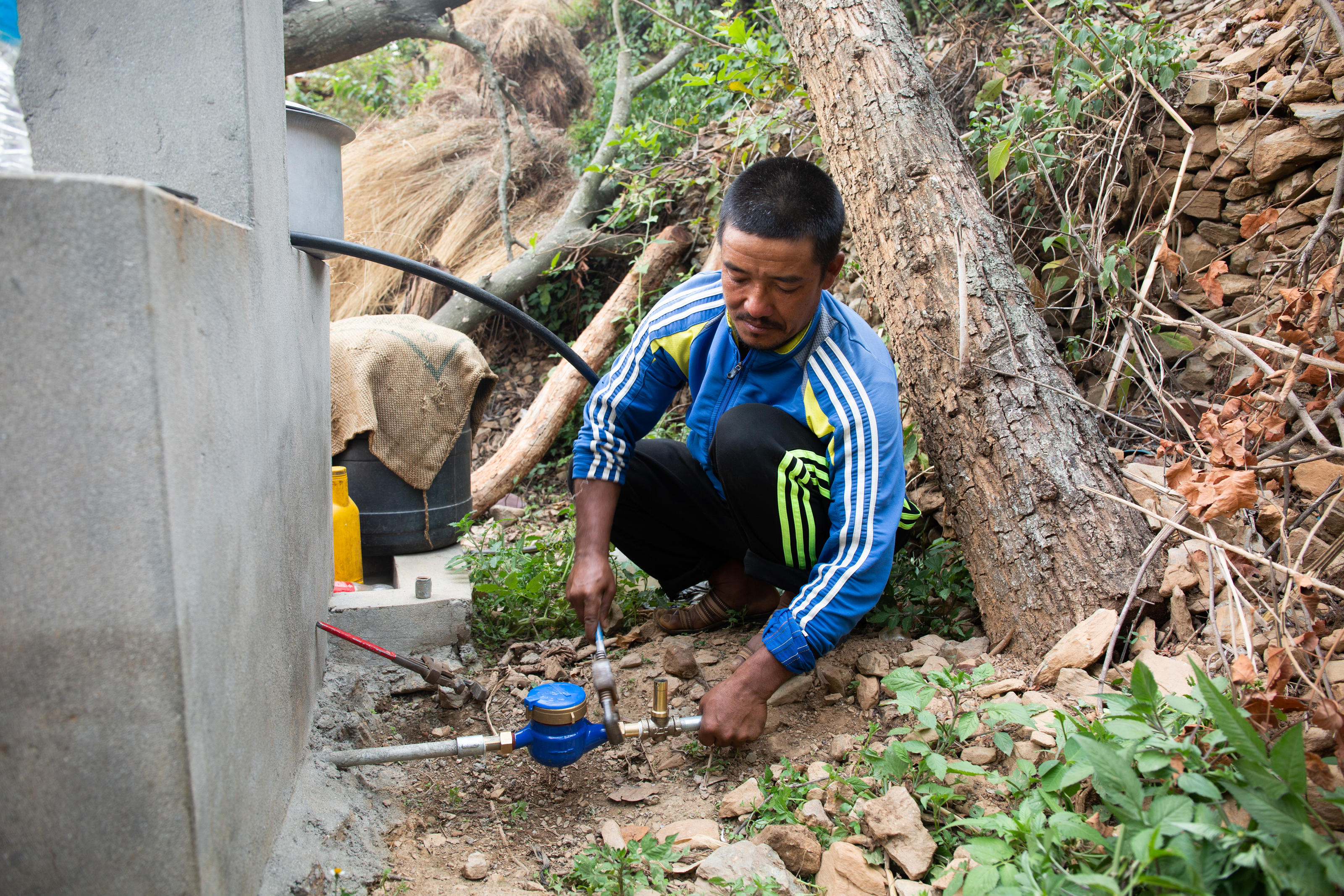 “I have just completed connecting a tap in one of the communities, and they are very happy to see running water from their taps. In the past, they would get water once in a week because seven households used to share that tap.”

The committee asked that one person from each household contributed to the digging of the trench for the main pipeline. Chandra took on the job on behalf of her family. 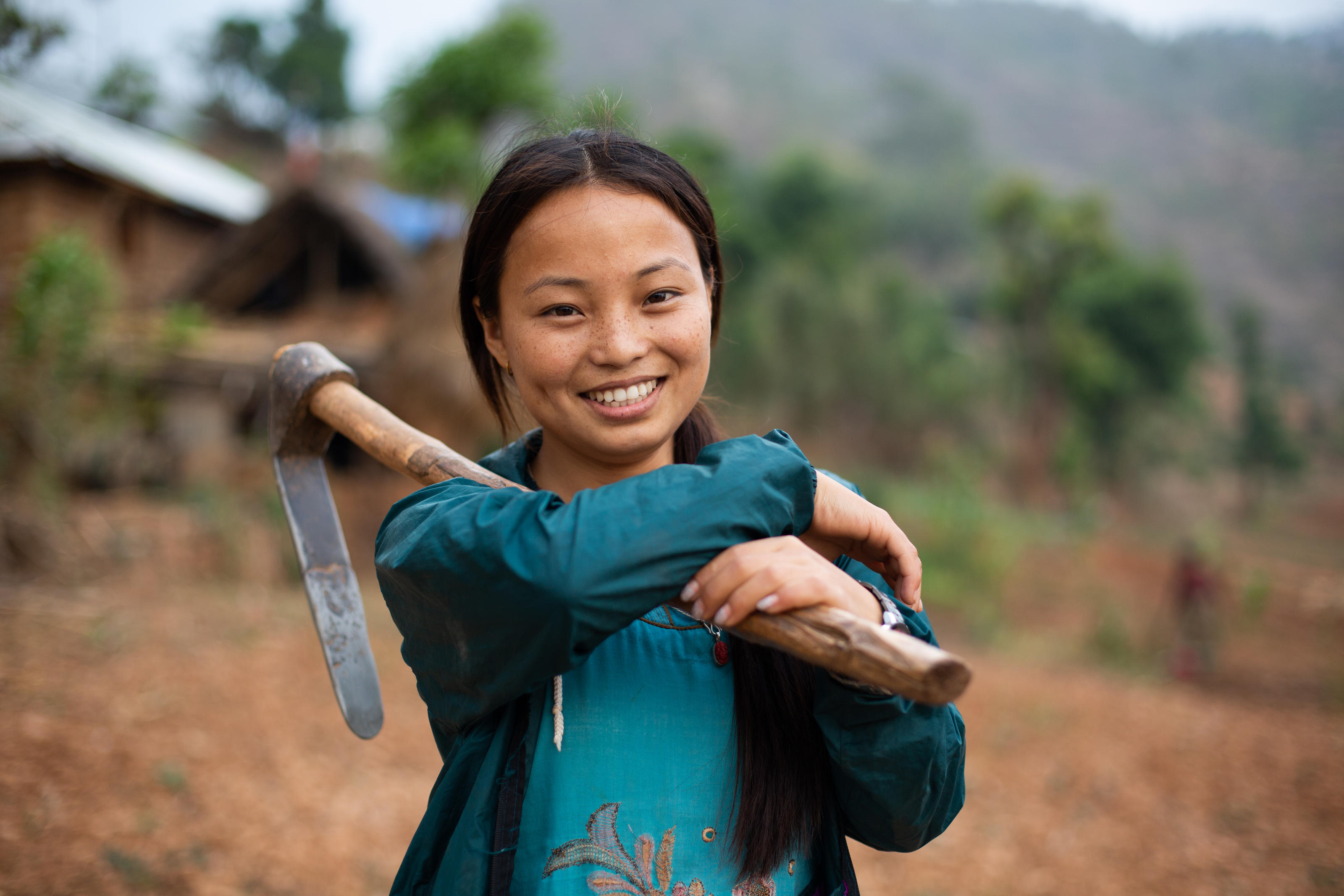 “I’m involved in the construction work so that I can get access to clean water at home. If we’re not ready to work for our own benefit, then we cannot achieve anything in life.”

This community has really pulled together to see the projected completed as quickly as possible. Kali reckons around 80% of people helped out in some way, which is incredible.

Having clean, running water inside so many homes is going to make such a difference to the people of Birtadeurali, especially for young people like Rekha.

I first met Rekha over a year ago when water was scarce, and she had no choice but to journey nearly 3km down steep hills and past cliff edges to collect it. It meant she was often late for school, or didn’t have time to finish her assignments. Her dreams of learning Japanese and becoming a teacher were quickly slipping away. 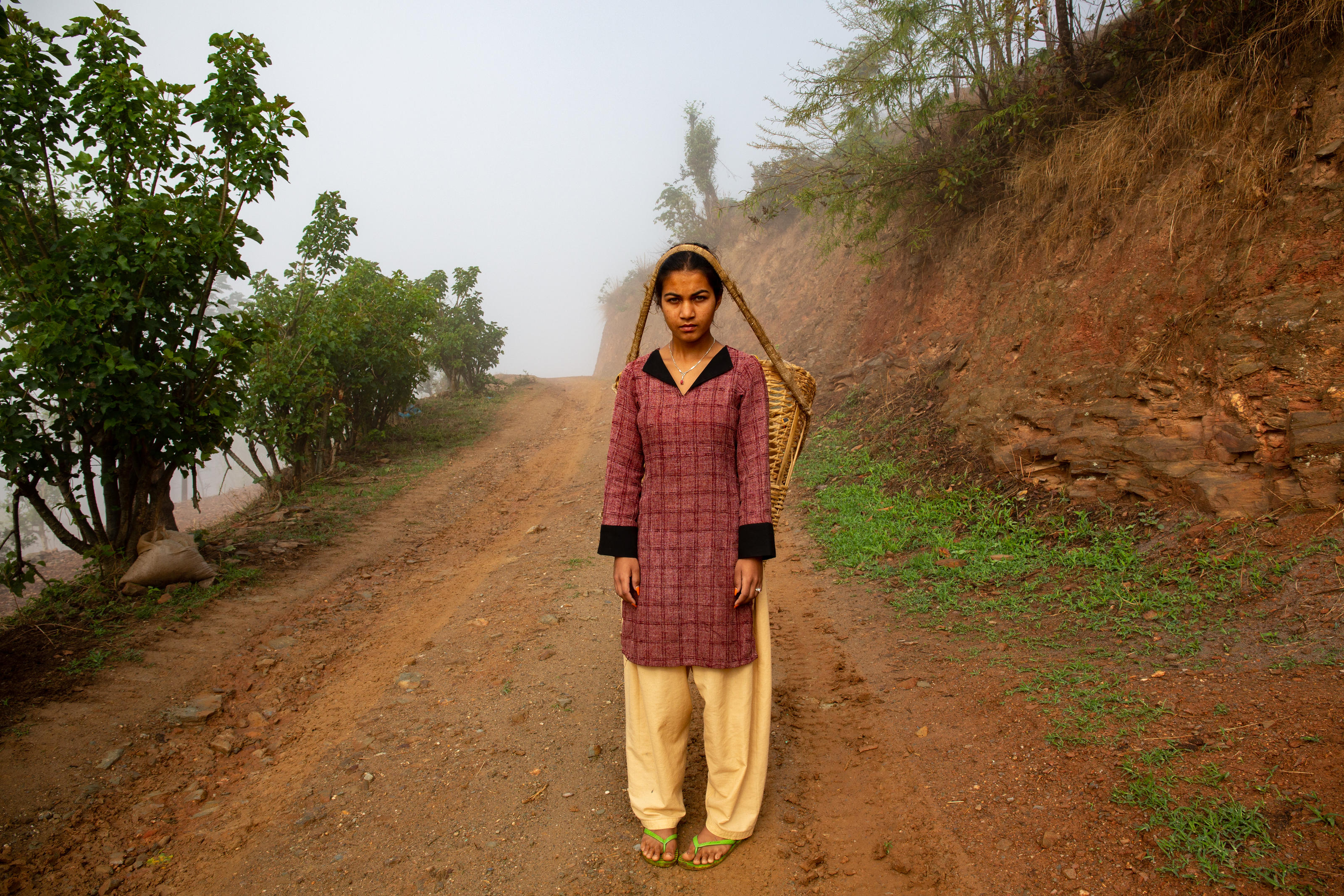 But fast forward a year, and the change in Rekha is visible. She too helped with the digging for the pipelines, and soon there will be a tap connected to water in her home. When she spoke to me, I could hear joy and excitement in her voice that wasn’t there before.

“For a young girl like me, having easy access to water at home is very important as it will not only help me to keep healthy and hygienic, but also means I can continue to study well for a better future.” 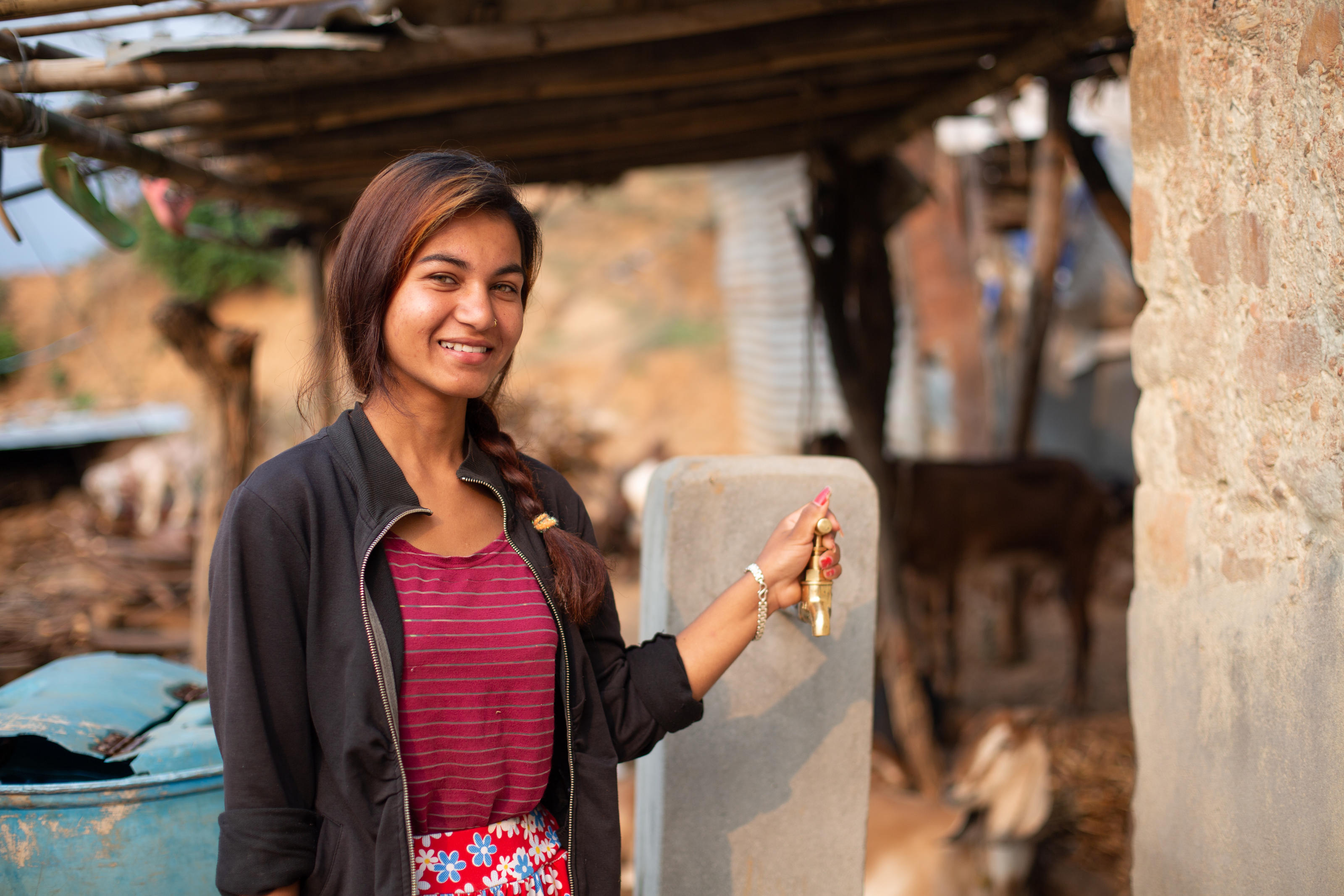 When I was asked to collect stories and photos that highlighted teamwork in communities, as part of WaterAid’s campaign with the Wimbledon Foundation, it got me thinking about how much I rely on a team for my work too.

I travel to lots of remote places to visit the people WaterAid works with and see first-hand the difference clean water could, or has, made to their lives. That takes a lot of planning and help from others, like the communications team at WaterAid UK, the project team at WaterAid Nepal, a driver to help me get there, other photographers to help take photos and interviews, as well as support from community leaders to let me spend time with their village. Without all of these people, I couldn’t collect the stories, films and photos that you see here.

To reach our potential, we all need a team behind us – whether you’re a champion at Wimbledon lifting the trophy, a plumber in Nepal connecting pipes, or a Voices from the Field officer at WaterAid collecting stories. Everyone has their team.

Share your team photo for a chance to win!

Whether you’re in London for this year’s Wimbledon Championships, or watching around the world, we’re calling on you to join #TeamWater.

Take a photo of you and your team and share it on Twitter for your chance to win a Wimbledon branded towel. Remember to mention @WaterAidUK and #TeamWater in your tweet.

And if you’re lucky enough to go to Wimbledon, come to our #TeamWater GIF Booth, located in the queue area, and say hello.

The Wimbledon Foundation, established in 2013, is the charity of the All England Club and The Championships. Its mission is to use the resources and heritage of Wimbledon to help change people’s lives. The partnership with WaterAid will help make clean water, decent toilets and good hygiene normal in Ethiopia, Malawi and Nepal. An annual donation of £100,000 over three years will transform people’s health, keep children in school, and empower women and girls to unlock their potential.

Find out more about WaterAid’s partnership with the Wimbledon Foundation

Mani is WaterAid's Voices from the Field officer in Nepal

Simple ways to stick to a workout plan, from an exercise expert