Behind the backdrop: photographing life-changing lavatories and the visionaries who built them

Posted by
Elena Heatherwick
6 min read
The local men who came together to build and erect the backdrop. The sanitation structure in this photo was built in 2017 by Norbet Kominy, age 68, a photographer and father of seven. In the past the mangroves surrounding the home were the 'family toilet'

Earlier this year photographer Elena Heatherwick and journalist Sally Williams travelled to the rural village of Ambatoantrano in Madagascar, for a special project with WaterAid and supported by players of People’s Postcode Lottery.

Equipped with nothing more than a camera, a white backdrop and a notebook, the duo set out to capture images of the structures and beauty of a seemingly everyday item: the toilet. In doing so, they would also hear the stories of the people who built them, learning how living with or without such a basic human right can transform lives.

A first glimpse of the personal stories behind this project, which will be fully revealed alongside the toilet portraits in an exhibition next year, has just appeared in The Guardian Weekend.

So, what is it like to be behind the lens? Photographer Elena Heatherwick tells us about her experience, the communities who welcomed her into their homes and shared their toilet tales, and why she chose to photograph her subjects the way she did…

The idea of photographing people’s toilets in front of a white sheet in a rural Madagascan village might seem like an odd one to many.

But by isolating the structures from their surroundings, we hoped to showcase their designs, to make people look differently at an everyday something and to celebrate the heroes of the movement pushing for better sanitation across the world.

In 2018 I was in Haiti documenting the life-changing work of midwives. I was in my element, having just witnessed a healthy baby girl being born, when I started talking to a man who told me that he too had had a busy day. He explained he’d spent the day looking at toilets. I laughed, thinking he was joking. But as we continued chatting I came to realise that toilets are no joke.

I felt so silly for having never considered the fact that so many people around the world don’t have access to toilets and, in turn, the horrifying consequences this has on people’s health.

Looking through his phone at the photos and videos he’d taken both of the toilets and the people who had built them I was struck by two things: the pride shown on their faces and the beauty of the structures they’d built.

1 in 4 people around the world don’t have a decent toilet of their own and one in eleven have no choice but to go out in the open. This is a huge problem because it means germs can spread easily and leaves people, especially women, vulnerable to attack.

So when a family gets a decent toilet for the first time, it’s not just a toilet to them – it represents the chance of having a better, healthier life. 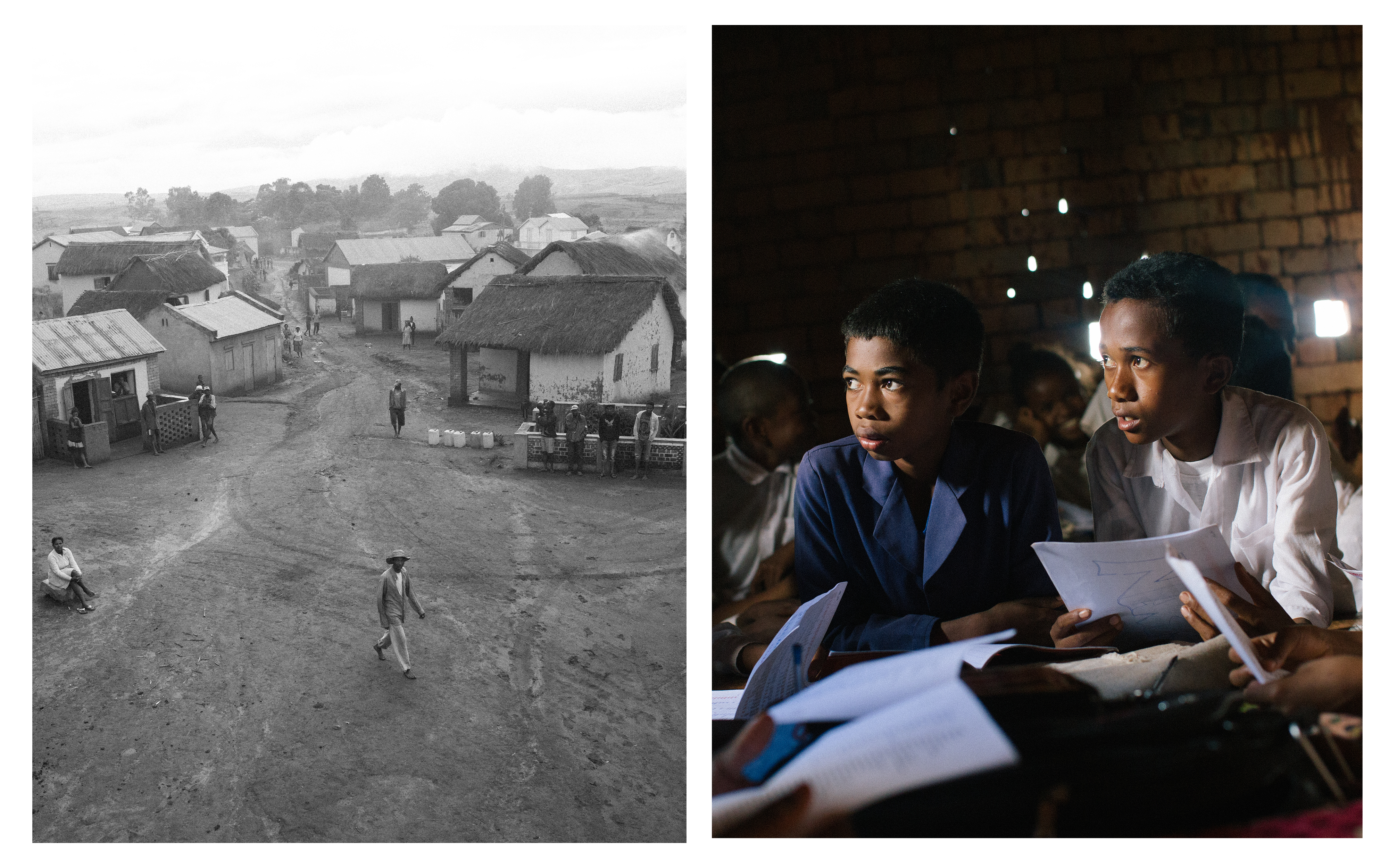 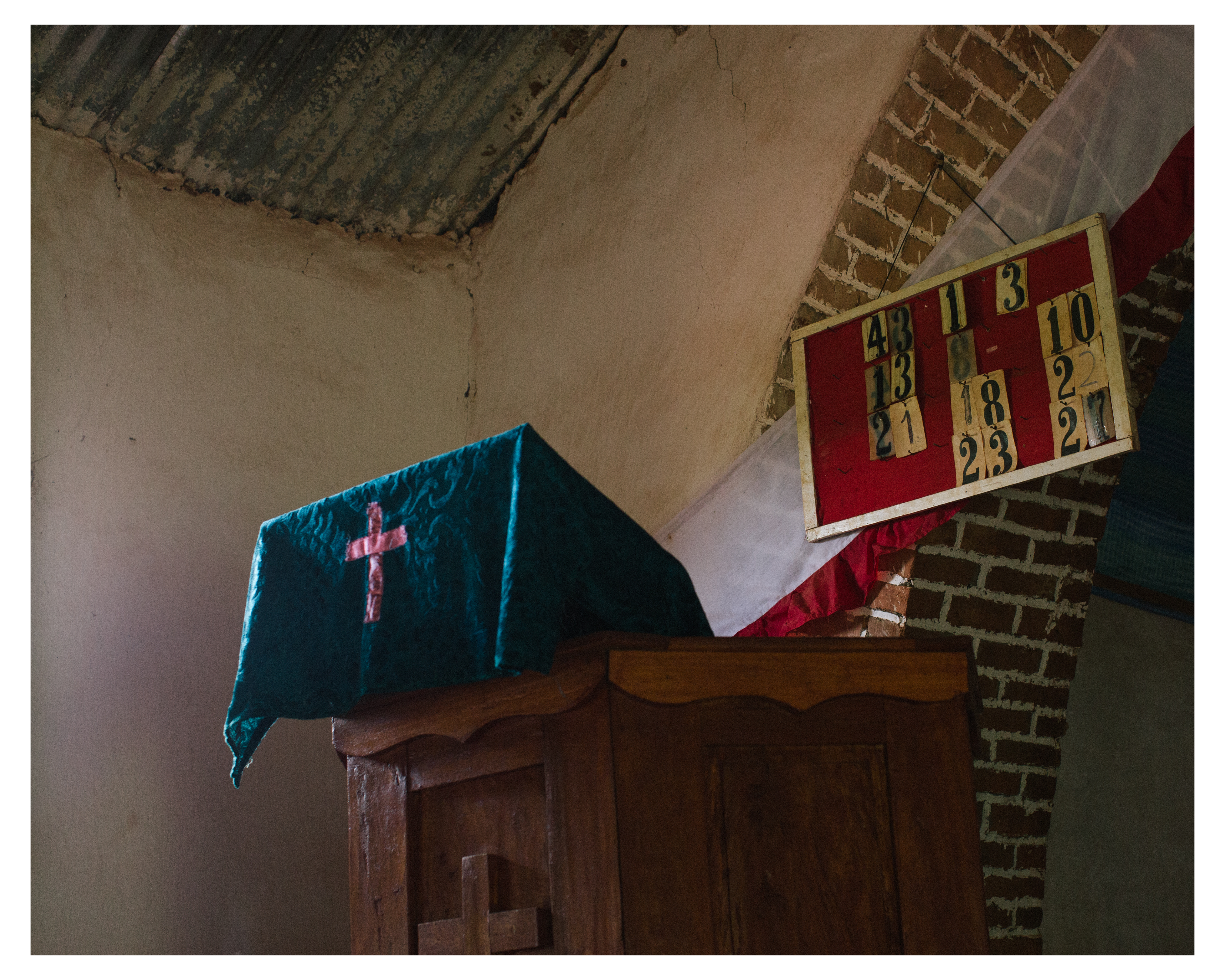 Now with decent toilets in the community, villagers of Ambatoantrano have the chance to stay healthier, stay in school and engage in community life.
Elena Heatherwick

WaterAid know this all too well – in the last year alone they reached 433,000 households with a decent toilet. So I knew that they would be the perfect partner to help us tell this story, and I approached them about collaborating. We were also incredibly lucky to have the support of People’s Postcode Lottery, whose players have already changed millions of lives by funding WaterAid’s work in sub-Saharan Africa since 2013.

On the ground in Madagascar

We landed in Madagascar late one evening in February this year, in sweltering heat and praying our backdrop hadn’t got lost in transit. Luck was on our side and the next day we set off on a seven-hour drive to Ambatoantrano, in the region of Bongolava, with our backdrop safely attached to the roof of our car. I was anxious and full of unanswered questions.

Beyond knowing that we were going to use a white sheet as a backdrop, the project relies almost entirely on the reaction and interaction with the communities we work in. Ernest, WaterAid’s Voices from the Field Officer based in Madagascar, was a huge help – he did everything from finding a wood supplier to erect our backdrop to approaching villagers who were interested in talking to us. Without him, we wouldn’t have a project at all. 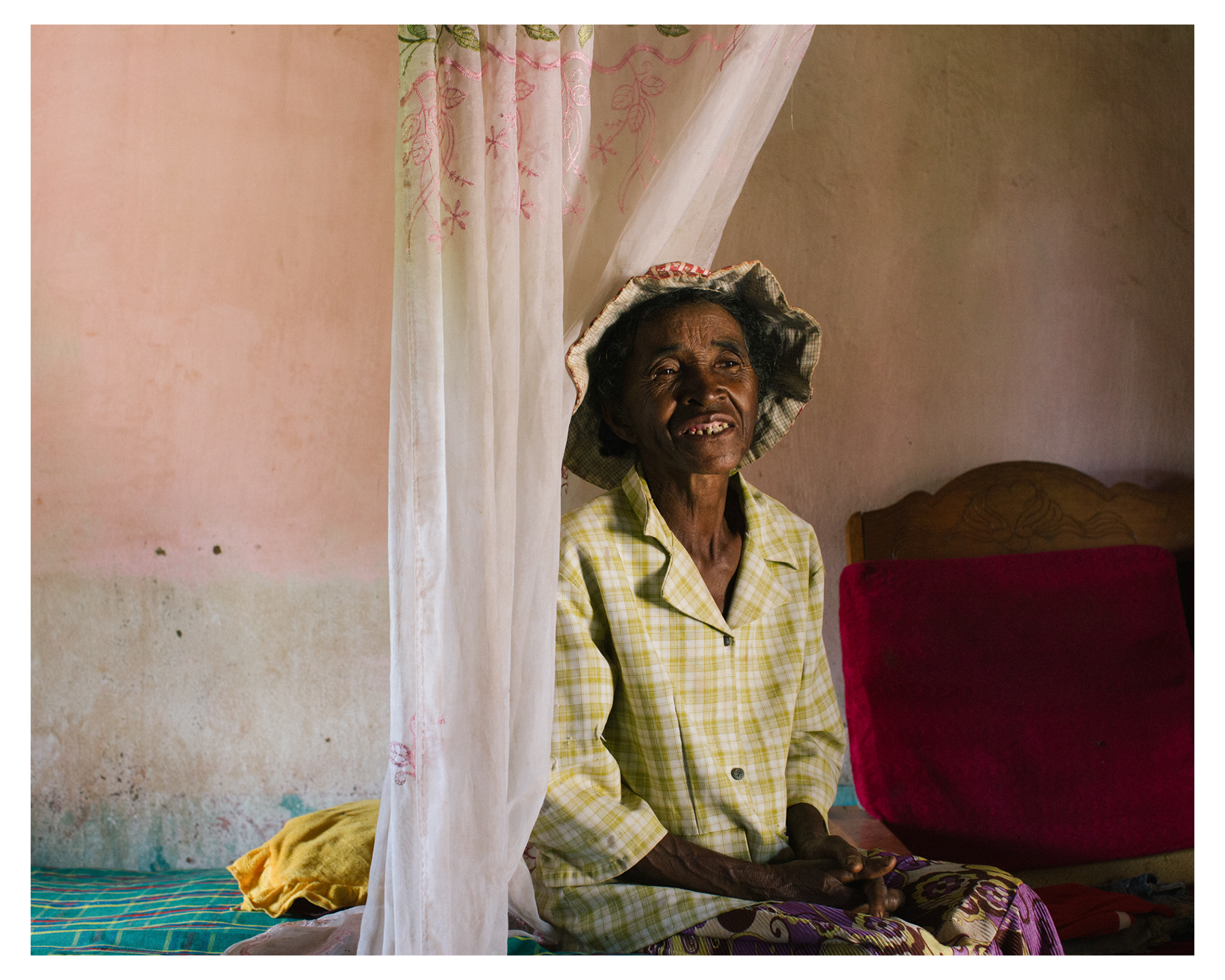 I met Jeanne, a mother of 11, in the street and she invited me into her home. I don't speak Malagasy but we managed to communicate enough through gestures and laughter.
Elena Heatherwick

I was worried that people wouldn’t be open to talking to us. We were there to talk to them about their relationship with their toilets and how they impact their lives – not an easy conversation to have with anyone, let alone a stranger. But Ernest made everyone feel comfortable and at ease, and Sally was able to interview all sorts of community members: village elders, children, teachers, the pastor; often in their homes or backyards. 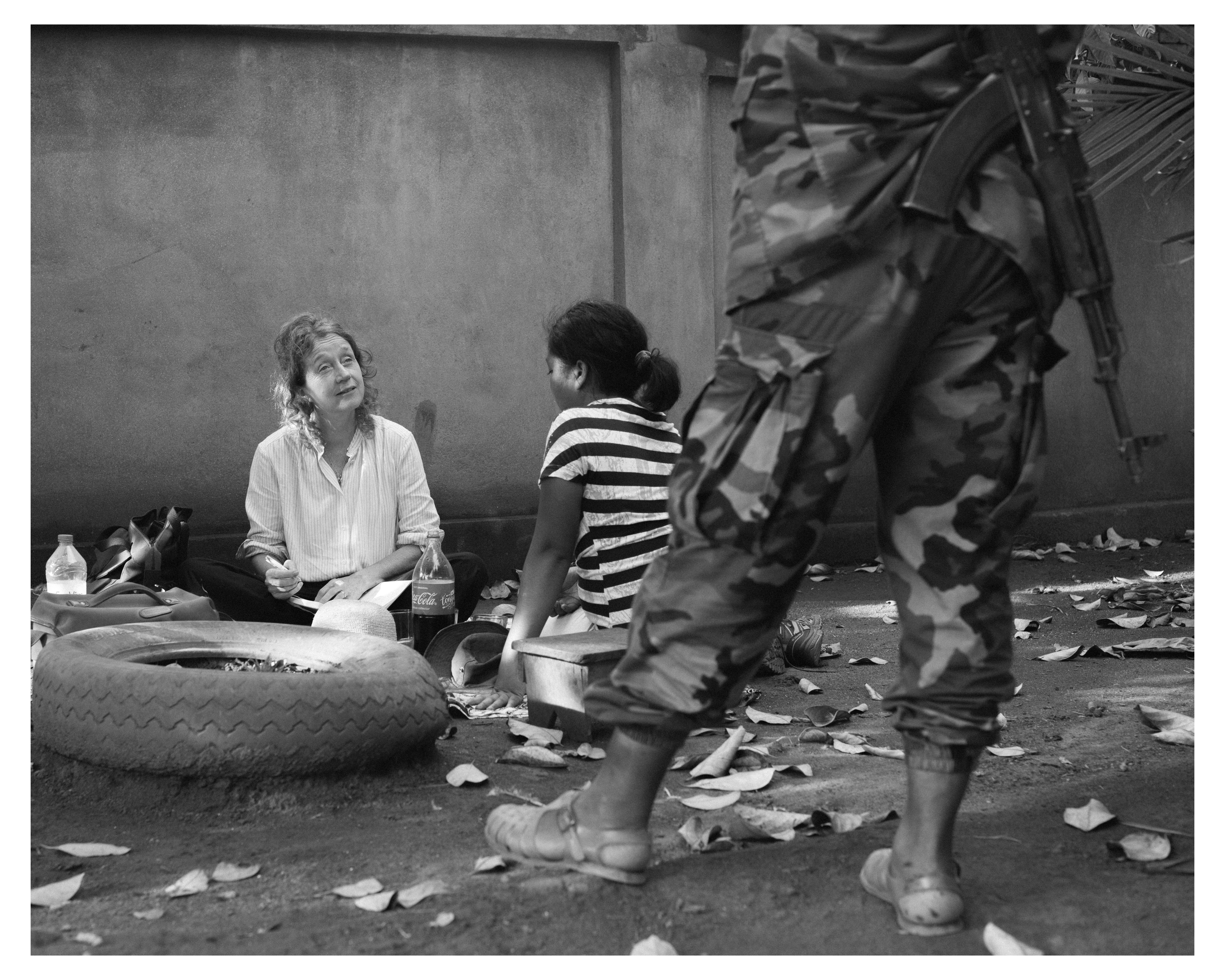 As news began to spread about our visit, lots of children began to appear, eager to see what we were up to. In order to entertain them (and allow Sally to talk in peace!), I taught them the song ‘Frère Jacques'. They learnt it very quickly and within an hour we were marching through the village singing together. It became our ‘theme tune’ –  when we’d step out of the car in the morning children would gather eager to sing our song. In the evenings when we left, they waved us off singing the same song. We couldn’t speak Malagasy, they couldn’t speak English; our shared language became ‘Frère Jacques’. Children helping by carrying my tripod from one sanitation structure to the next.
Elena Heatherwick

The plan is to visit various countries around the world who face different environmental, social and economic challenges to show a wide variety of reasons why sanitation is at the heart of our livelihoods, why it is an issue that governments need to bring to the forefront of their agendas.

Next up is Rwanda in October, another country that WaterAid works in. Following a brutal civil war, the country has made astounding progress and is an example that change is possible.

Almost three in five people now have clean water and two thirds of the population has a decent toilet. We want to learn about their approach to sanitation, about life after such brutality and hear first-hand how WaterAid is helping everyone get access to clean water and decent toilets. I’m also looking forward to finding out what our next ‘theme tune’ will be!

Towards to the end of 2020 our project will culminate in an exhibition in London where we will weave together the stories and pictures we’ve gathered during the next 18 months. For now that is all I can say, partly because it’s a work in progress but also because, once again, so much depends on who we meet and what we see. We are incredibly grateful to People’s Postcode Lottery and WaterAid for trusting us. We are being allowed the freedom to work instinctively; we are open to being guided by the people we meet and the stories they share with us.

Our aim with this work is to present a roll-call of life-changing lavatories in villages and towns from across the developing world; the people who use them and the visionaries who built them. We want to tell a compelling and dignified story about a global problem – and show that toilets really can save lives.

You can find out more about the project and the people we met in Ambatoantrano in Sally Williams' article in the Guardian Weekend Magazine on Saturday 10 August.

Since 2013, players of People’s Postcode Lottery have supported WaterAid’s life-saving work with a staggering £11.4m. Find out more about our partnership >

Elena Heatherwick is a freelance photographer based in London who specialises in portrait and documentary photography.
Topics
Toilets