In August 2017, thousands of Rohingya people fled across the Myanmar border to take refuge in a small area of Southern Bangladesh. Young and old, women and men, they were fleeing violence that we can’t even imagine.

WaterAid isn’t a humanitarian response organisation, but in Bangladesh, we have pride in helping people. When we saw what was happening, our team wanted to take a hands-on approach.

In September, I visited the refugee camp, and it was very shocking. I’ve never seen so many distressed people in one place. What made this crisis particularly challenging was the sudden influx of people to a very small area; over half a million people who were traumatised and had fled for their lives. The refugee camp (called Kutupalong Camp) is now so large, you can see it from satellite photos of the area. They live in plastic tents, stretched over a bamboo structure, with lots of people to one home.

The water facilities were next to none. Some people were drinking water they’d received from aid organisations, but most had to drink from ponds or streams. I remember seeing a family getting very muddy water from an open stream. It was upsetting. 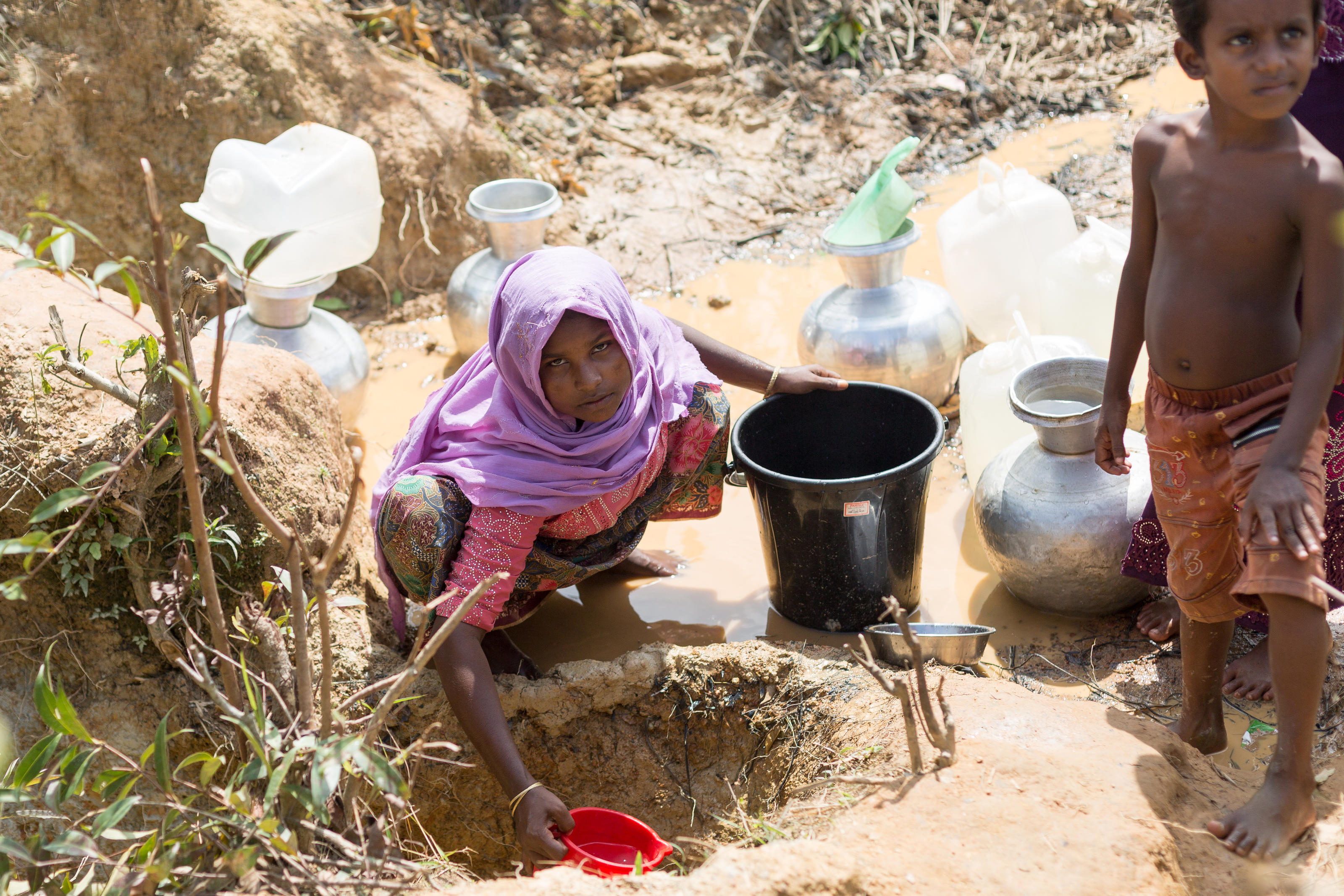 A Rohingya woman collects dirty water from a pond in the Kutupalong refugee camp.

There were hardly any toilets, so one loo would be filled overnight because of the amount of people using it. They had no choice but to go to the toilet in the fields, and human waste was widespread.

Seeing the children in these unhygienic conditions was distressing. There were so many little children, often without many clothes on, playing in the mud. Current reports suggest that every day, 60 children are being born in the camp – that’s more than two every hour.

A cholera epidemic was a ticking time bomb. Aid agencies were vaccinating people, but water, toilets and hygiene facilities had to be put in place to prevent the outbreak of deadly diseases.

So, we raised an appeal to help the Rohingya people. And with support from so many people in the UK, we set up clean water, toilets and provided hygiene awareness sessions in this crisis situation.

Our response team (made up of engineers and programme experts led by a technical adviser) went to assess the situation and get to work. We installed tube wells (deep wells dug into the ground, where the water is pumped up by hand), and built toilets and shower blocks where women in particular could wash safely.

One of the greatest threats to life was the human waste infecting the water and spreading disease. With half a million people going to the toilet every day, where does it end up if it’s not treated? It goes into the canals and waterways where people wash their clothes and children play. So we built toilets and set up around 20 faecal sludge management plants around the camp. This meant that toilets could be emptied and their content safely managed. WaterAid trained people in how to empty the toilets and encouraged them to take responsibility for their maintenance. So far, almost a million litres of human waste have been treated.

Sickness can spread very fast in this kind of situation, so we recruited Rohingya volunteers to give hygiene training to people in the camp, in their own language. Having someone in their own community sharing this information with them was important to gain not only understanding but also trust. Volunteers like Humayra (shown in the video).

We involved the community from day one. This way, the facilities that we have put in place will be sustainable.

When I went back to visit eight months later in May 2018, I saw so many positive changes. Water, toilets and hygiene that have brought a sense of normality to people living in the middle of chaos.

So what now? This is a big question. The monsoon season is here, and it’s very unpredictable. The key challenge will be cyclones bringing water-logging and landslides. The refugee camp is in an area that was previously covered with trees, which were felled to make space for people. It’s what we call jig-jag hilly – on hills made of soil rather than rock. It’s prone to landslides and lots of facilities and structures are at risk.

If the facilities in the camps are hit, everything else will be affected. We don’t want a bad monsoon, it will be more stressful for these people who are already in distress. But if it is, we’re ready. We will make sure that the toilets are regularly emptied so that if there are leaks, and the structures are broken, it won’t pollute the area. We are ready to respond if the tube wells are flooded, and our volunteers will keep up the hygiene practices.

This crisis has shown how people across the world can come together to help each other in the most difficult of times. The support we have received from people in the UK has been vital to getting essential services out in the midst of one of the most complex humanitarian situations in the world. It reminds us that when we act, we do not act alone.