Tombo's Wound: Sierra Leone through the lens of Joey Lawrence

Photographer and director Joey Lawrence has travelled the world capturing human stories. In May 2017, he travelled to the village of Tombohuaun in eastern Sierra Leone, to meet the people at the heart of our winter campaign, Untapped. Here he tells us about the photography and storytelling process, and the people he met along the way.

Unity over adversity. It’s a running theme in the story of Tombohuaun, translation 'Tombo’s Wound,' a remote village tucked into the jungle of Sierra Leone’s Eastern Province. The community’s founding legend states that a villager named Tombo cut his foot on a catfish in the river, and the then chief ordered the fish to be caught and killed. Back then, as now, the community came together to put things right: they caught the fish, ate it, and went on to name the town after this symbolic triumph.

This banding together of the community has come to embody its resourceful spirit, with Tombo’s wound the least of its ongoing struggles. In the last 15 years, in addition to enduring an Ebola outbreak, the village has been without clean water since the nation’s civil war, as it has not yet been able to reconstruct the enclosure that once protected its supply. The community of 400 also lacks decent toilets and safe hygiene practices, increasing residents’ susceptibility to water-borne illnesses. 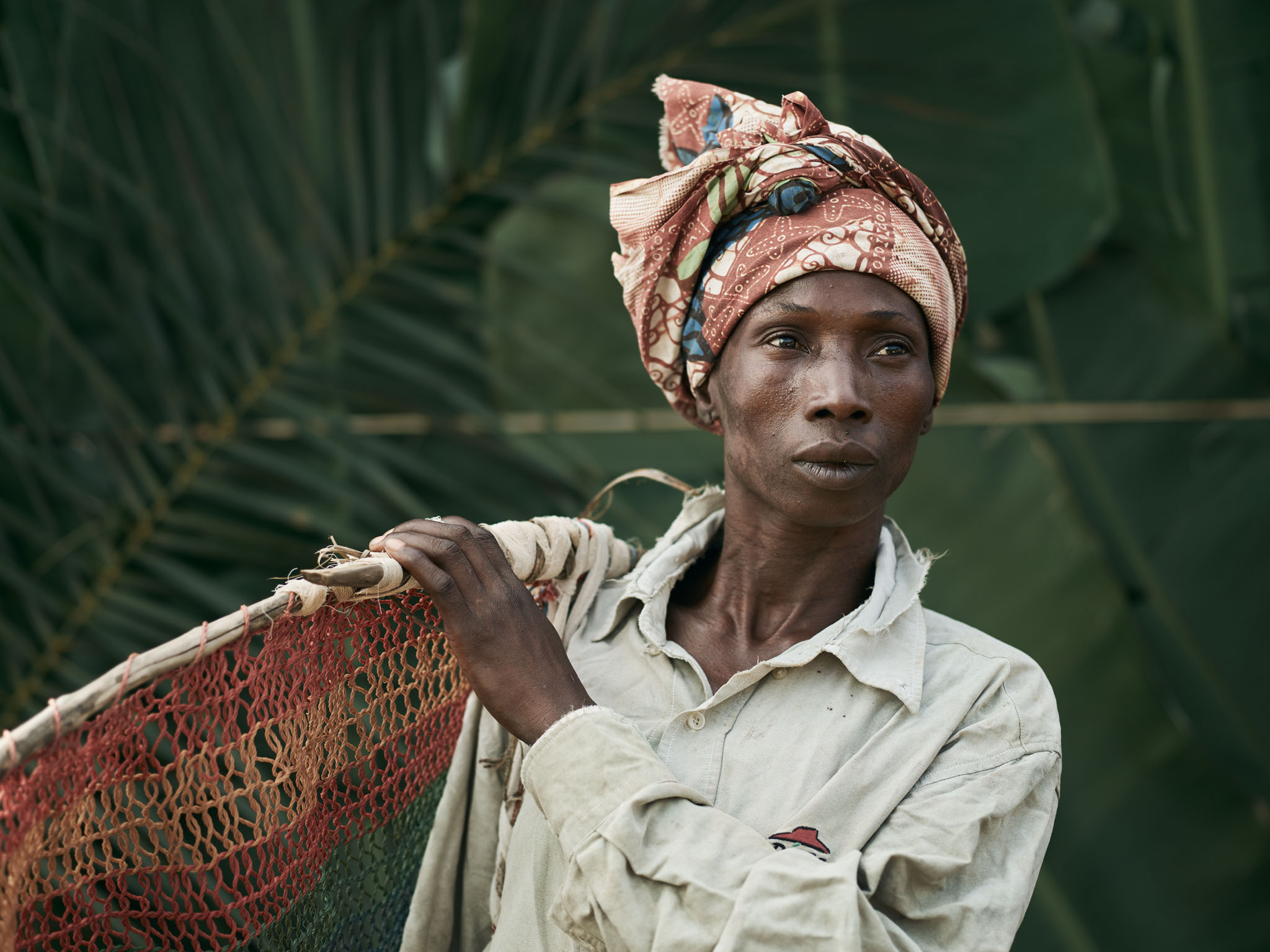 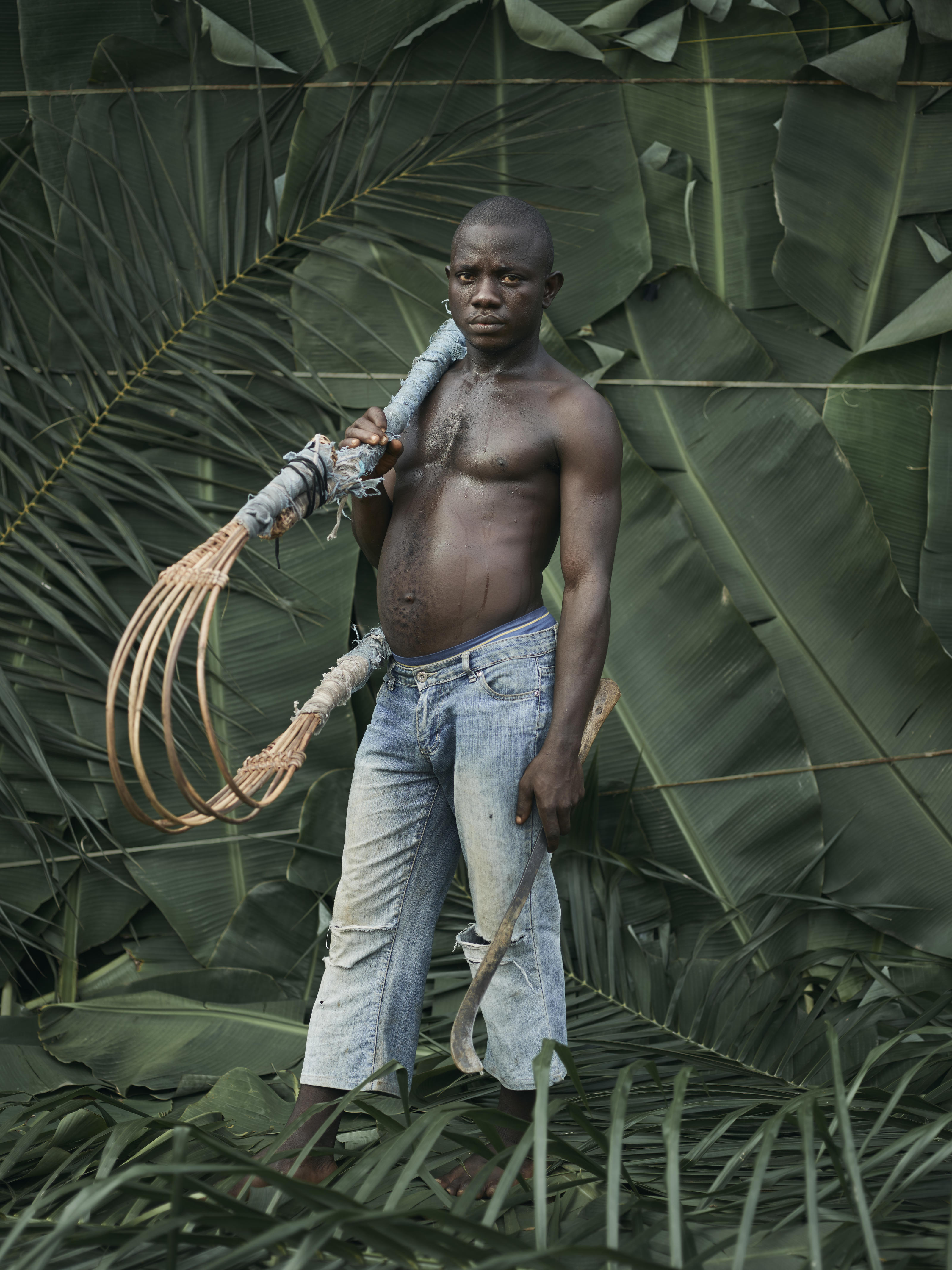 But those dire circumstances were not the only focus of the photo series I was commissioned to make for WaterAid, the international NGO working to bring clean water to Sierra Leone. Rather than just creating images that underscored Tombohuaun’s plight, WaterAid and I envisioned a cultural study of the community that would highlight its resilience, its fraternity, its highly organised structure, and its work ethic. These are all the things that will enable the village to thrive and sustain its clean water resources and practices long after WaterAid has completed its work. These photographs became the visual backbone for WaterAid’s Untapped campaign.

In light of those objectives, my photos were to spotlight two main themes—the unique characters within the community and the hard work they do to keep it flourishing. 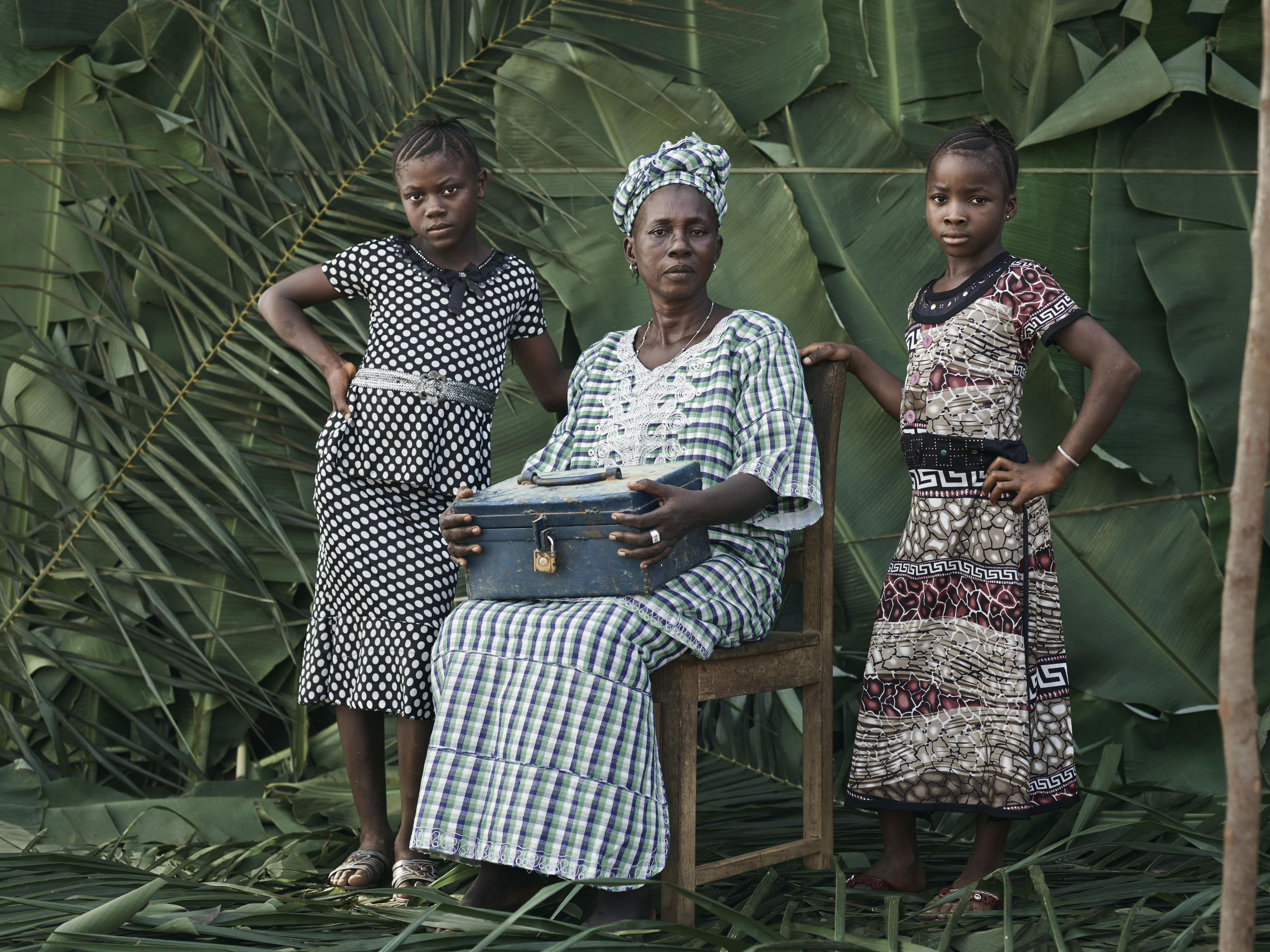 WaterAid/ Joey Lawrence
Mayama, 60, women's leader and village midwife, with the two children she looks after: Jeneba, left, and Nafisatu, her niece. She holds the savings bank that all women contribute to and share out.

With some of the photographic work I’ve done in other parts of Africa, it’s been easy to lean on certain visual crutches—tribal face paint, ornate jewellery, striking clothing. But that’s only skimming the visual surface of the community and the people and wasn’t in the spirit of this campaign. Digging deeper requires an extended stay, as well as collaborating with locals who have grown up in the area.

Long before we traveled to Tombohuaun, WaterAid had laid the groundwork for a positive, in-depth experience: Staff first surveyed the land to see if they could indeed build the well and bring sustainable clean water, and then Neil Wissink (who became a friend during the project) went into the community to get to the know the villagers, gain trust, create a timeline for the project, and gain permission for the visual component. By the time we arrived to make photographs, the villagers were well aware of our role and purpose and welcomed our presence. In two weeks time, the standout characters were sure to reveal themselves, and they did: The town beauty queen who artfully styles the women’s hair. The blind man who prays outside his porch. The Imam (religious leader) who acts as an elder in the community. The vivacious female leader who delivers the community’s babies. 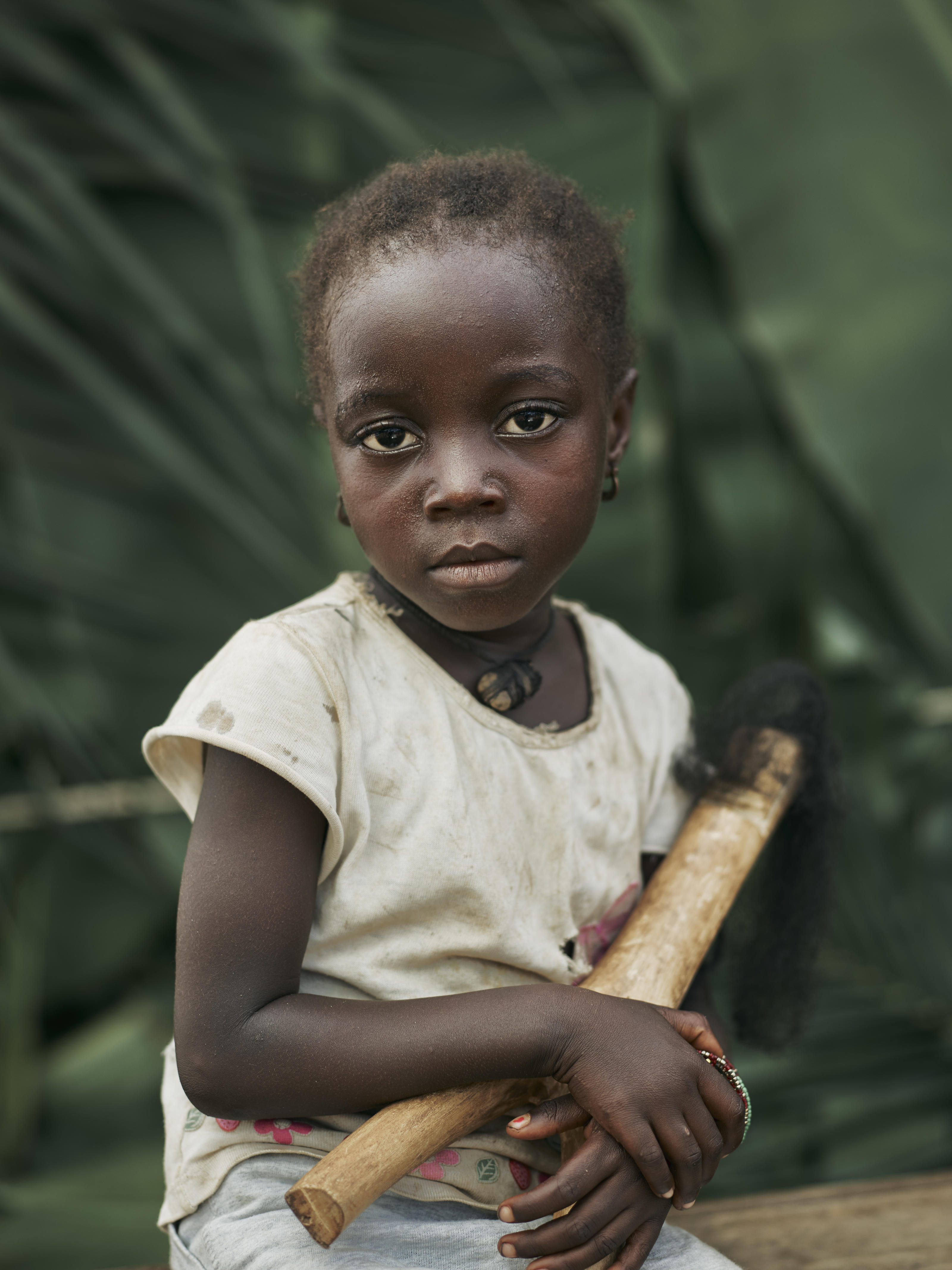 WaterAid/ Joey Lawrence
Nancy, 6, holds the doll that her father Sellu made for her, in the village of Tombohuaun. Although Nancy is a year older than her cousin Lucy, she is a head shorter; her father thinks her stunted gr

As characters emerged, I photographed each of them in two ways: I made their portrait in an onsite 'studio' built by the villagers; and I photographed them in action, highlighting their role or job in the community. WaterAid would then use these dual photos to paint a complete picture of each subject and their individual story.

For the portraits, instead of setting up a portable studio, we decided to enlist the community’s help to build an outdoor studio onsite in the jungle. This allowed them to brandish their resourcefulness and teamwork and me to have a portrait setting that would complement the overall style of the series. The studio was set up on the side of a building, with banana and palm leaves laid out on the ground, and bed sheets hung from two poles to act as a giant diffuser.

WaterAid/Joey Lawrence
The creation of the 'studio' 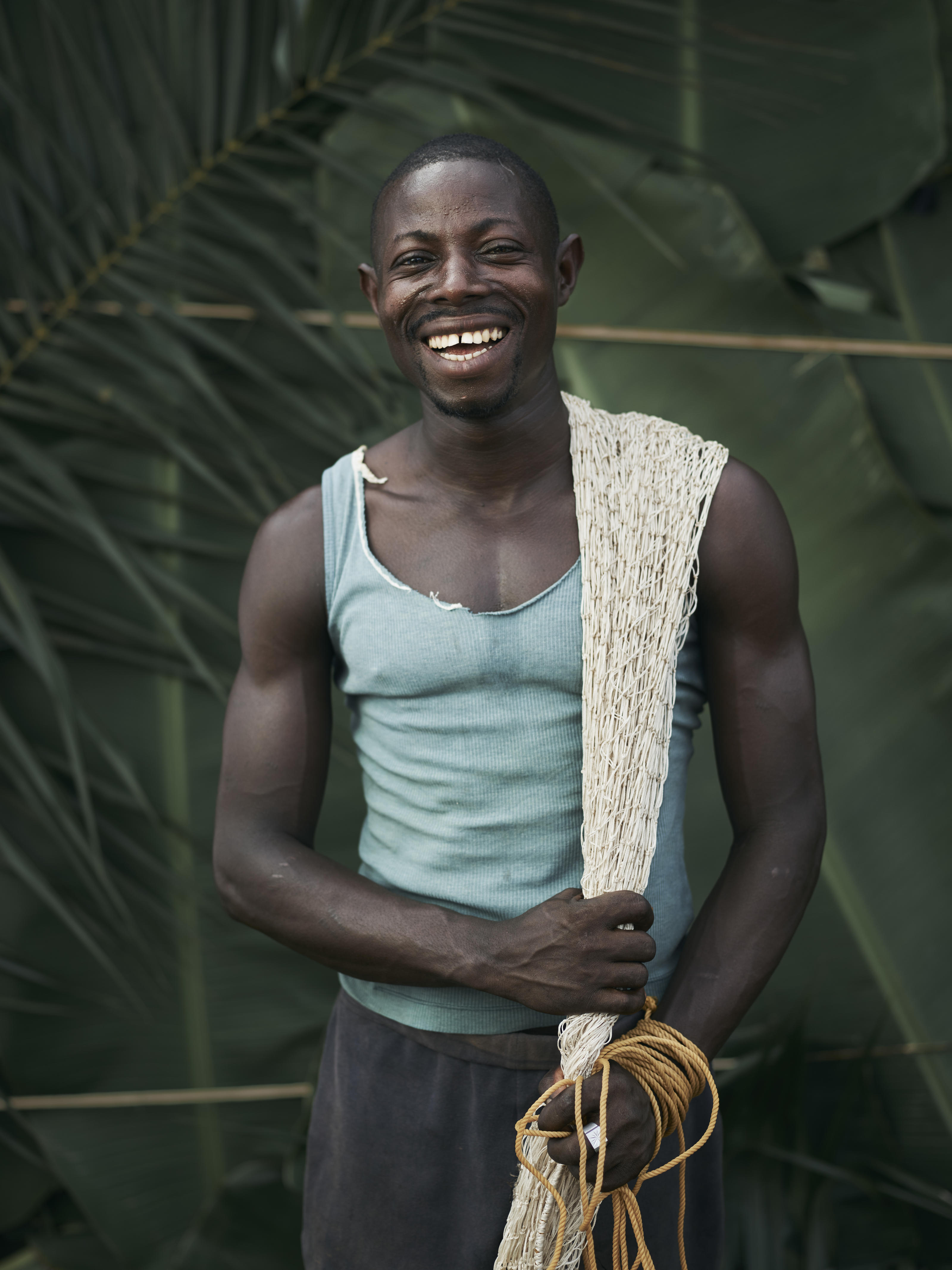 WaterAid/ Joey Lawrence
Sellu Smart, holding home-made fishing nets, made from leaves, in the village of Tombohuaun. Sellu spends at least half of his wages on healthcare for his family.

Ultimately the images went toward an uplifting and innovative fundraising campaign that breaks out each character in the community, tells their individual stories, and inspires admiration and hope rather than pity and sadness. It was a dream project for me, working with a well-respected water charity that does thorough, responsible work, and an overall lovely two weeks in the rainforest with the people of Tombohuaun.

See more of Joey's work with the people of Tombohuaun here

Joey L. is a Canadian-born photographer and director based in Brooklyn, New York who shot pictures for the Untapped Campaign in Tombohuaun, Sierra Leone.