Posted by
Laura Crowley
on
3 July 2020
In
Global, Hygiene

Artists Grayson Perry and Jean Jullien, photographer Aida Muluneh, and actor Russell Tovey are rallying support for WaterAid’s new campaign, Art of Change, which calls for clean water and hygiene for everyone everywhere.

Handwashing with soap is one of the most effective ways to prevent the spread of diseases like coronavirus, yet three billion people worldwide have nowhere to wash their hands with soap and clean water at home, and one in four health centres lack these basic facilities on site, putting lives at risk.

WaterAid is inviting artists to help address this injustice by using their creative skills as a force for good, producing inspiring and thought-provoking work linked to the theme of water and health to drive change and help transform lives.

Amateur and professional artists can enter, and have until 27 July to submit their work, which will be put before the all-star panel, including Perry, Muluneh, Tovey and Jullien, who will shortlist their top 12. The public will then get to vote on their favourite.

The winning piece of artwork will be announced on Global Handwashing Day (15 October) and presented to world leaders as a bold statement ahead of the G20, urging them to double their investment in water and hygiene in response to the Covid-19 pandemic.

Winner of the 2003 Turner Prize, Grayson Perry, who has been keeping the public entertained during lockdown with his Art Club series, is one of the judges.

“Art is a powerful tool for expressing what’s going on in the world and identifying what really matters, especially during the turbulent times we currently find ourselves in.

“WaterAid’s campaign is a great way for artists from around the world to unite and use their creative skills to highlight the importance of everyone having the basics of clean water and hygiene and the vast inequalities that exist as we tackle a shared crisis.

“I’m looking forward to seeing the different ways people will interpret and portray this important issue and the impact the it will have. Together, we can call on governments to take action that will help transform lives for good.”

Photographer and contemporary artist Aida Muluneh, whose work is on permanent exhibition at New York’s MOMA gallery and the Smithsonian Institute, also joins the campaign as a judge, having previously worked with WaterAid on a ‘Water Life’ project, which highlighted the impact of the water crisis on women 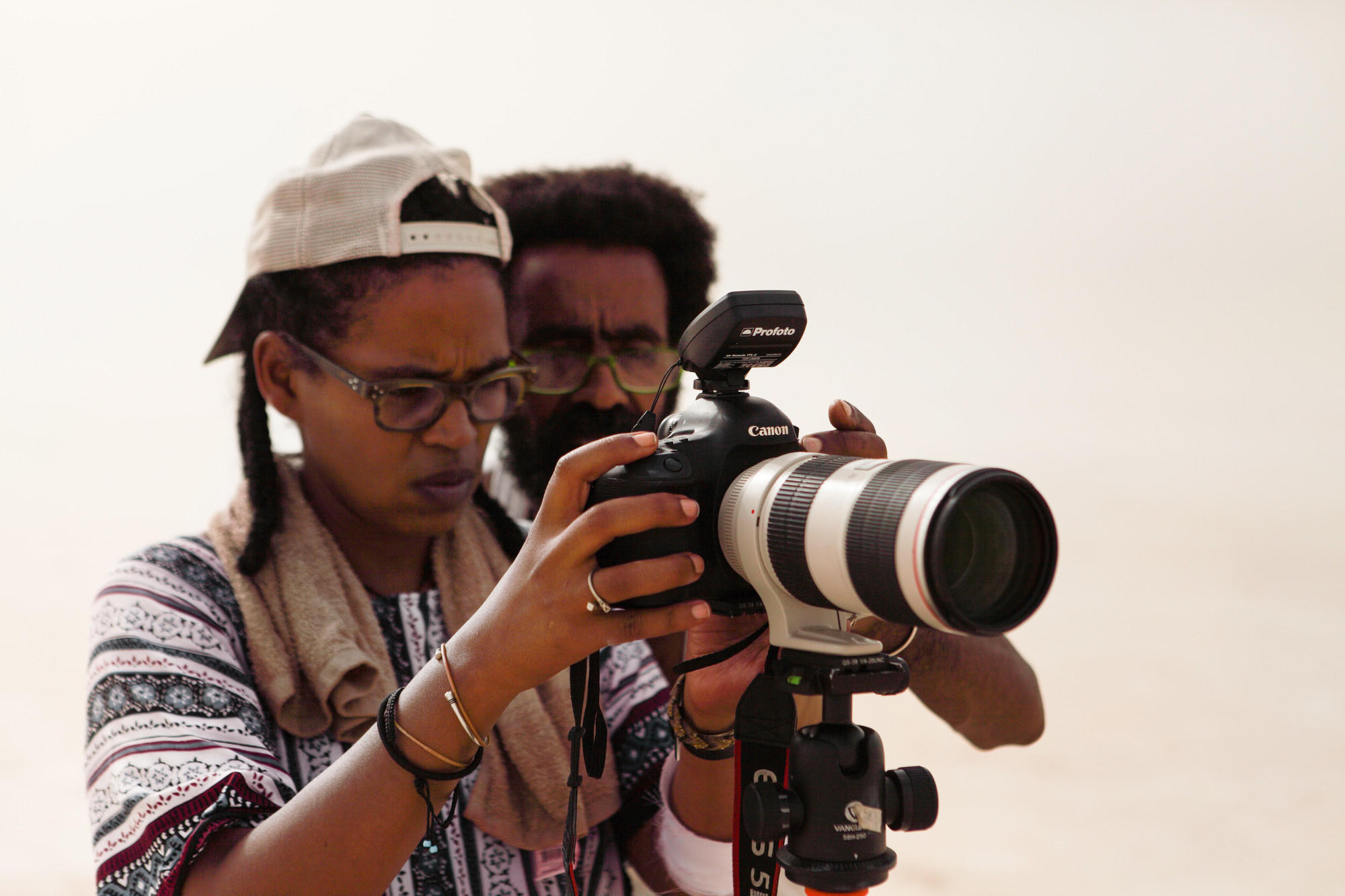 “Creativity and art are powerful forces for change in the world. As a photographer working in Ethiopia, my vision has been to create art that courageously challenges clichés and portrays the strength, beauty and heritage of Africa and its women.

“Clean water and good hygiene are vital in preventing the spread of deadly diseases like coronavirus, yet millions of people are living without these basics. Together, we can call on governments to take urgent action to address this injustice.

“I’m excited to be working with WaterAid on this initiative that offers artists the chance to create a unique piece of work that advocates for global change and helps transform lives across the world.”

“Contemporary art is my passion; it’s a beautiful way to share an experience, break boundaries, create connections, and inspire change. That’s why I’m really proud to be working with WaterAid on its Art of Change campaign. It will bring together different stories from around the world that will be used to urge world leaders to take notice and make concrete actions that will transform lives.”

International water and sanitation charity WaterAid is racing to reach vulnerable communities in 26 countries with much needed clean water and handwashing facilities as well vital hygiene education. WaterAid is calling for these basics to be prioritised on a global level as the pandemic continues to escalate.

“Handwashing with soap is the first line of defence against the spread of diseases, but three billion people have nowhere to wash their hands at home.

“While the world rallies to get a vaccine, preventing the spread of infection has never been more important. Alongside much-needed investment in vaccines, we are calling for world leaders to double their investment in clean water and good hygiene to help communities protect themselves against the spread of Covid-19 and become more resilient to future health crises.

“Everyone can play a role in getting clean water and good hygiene to those most in need by adding to their voice to our campaign, either through creating artwork that can help drive change or by voting on their favourite and supporting our call for urgent action.”

Artists can help amplify WaterAid’s call for water and hygiene to be prioritised by joining Art of Change campaign. There is more information available at www.wateraid.org/uk/art-of-change. Entries must be submitted to [email protected] by noon BST on 27 July 2020.

WaterAid is working to make clean water, decent toilets and good hygiene normal for everyone, everywhere within a generation. The international not-for-profit organisation works in 28 countries to change the lives of the poorest and most marginalised people. Since 1981, WaterAid has reached 26.4 million people with clean water and 26.3 million people with decent toilets. For more information, visit www.wateraid.org/uk, follow @WaterAid or @WaterAidPress on Twitter, or find WaterAid UK on Facebook at www.facebook.com/wateraid.

Winner of the 2003 Turner prize, Grayson Perry is one of Britain's best-known contemporary artists. He works with traditional media; ceramics, cast iron, bronze, printmaking and tapestry and has exhibited nationally and internationally. His works reference his own childhood and life as a transvestite while also engaging with wider social issues from class and politics, sex and religion, as well as contemporary issues such as Brexit and divided Britain.

Perry was elected a Royal Academician in 2012, awarded a CBE in 2013 and in 2015 was appointed Trustee of the British Museum and Chancellor of the University of the Arts, London.

Aida Muluneh was born in Addis Ababa, Ethiopia. She graduated with a degree in Film from Howard University in Washington D.C and after graduation worked as a photojournalist at the Washington Post. Aida is a Canon Ambassador, and has been a jury member on several prominent photography competitions most notably the Sony World Photography Awards 2017 and the World Press Photo Contest 2017. In 2018 she exhibited “Being: New Photography 2018” at the Museum of Modern Art in New York City. Her work is the permanent collections of a number of institutions including MOMA and the Smithsonian institute.

She is the Founder and Director of the Addis Foto Fest (AFF), the first international photography festival in East Africa hosted since 2010 in the city of Addis Ababa. She continues to educate, curate and develop cultural projects with local and international institutions through her company DESTA (Developing and Educating Society Through Art) for Africa Creative Consulting PLC (DFA) in Addis Ababa.

With an extensive background in film, television and theatre, award-winning actor Russell Tovey made his stage debut as part of the original company for Alan Bennett’s 2004 play The History Boys, both at the National Theatre and on Broadway.  He then reprised his role of ‘Rudge’ in the much loved 2006 film adaptation directed by Nicholas Hytner.

On television, Russell was recently nominated for a 2020 Critic’s Choice Award for best supporting actor for his role in the critically acclaimed BBC/HBO Drama series Years and Years written by Russell T.  Davies, alongside Emma Thompson and Jessica Hynes. He can currently be seen starring opposite Imelda Staunton and Stephen Rea in ITV’s Flesh and Blood directed by BAFTA nominee Louise Hooper. Russell will next be seen in a leading role for ITV Drama The Sister, from Luther creator Neil Cross, due to be released later this year. Previously, Russell played the leading role of George Sands in the BBC’s fantasy comedy series Being Human with Aidan Turner and Claire Foy.

Apart from acting, Russell also runs a successful podcast, Talk Art, with friend and gallerist Robert Diament, where they interview leading artists, curators, celebrities and gallerists about their shared passion and have interviewed world renowned names such as Sir Elton John, Billy Porter, Lena Dunham and Raven Smith to name a few.

Jean Jullien is a French graphic artist living and working in Paris.  Since graduating from Central Saint Martins and the Royal College of Art his practice ranges from painting and illustration to photography, video, costume, installations, books, posters and clothing to create a coherent yet eclectic body of work.

Jean has shown work around the world with museums and galleries in Paris, London, Los Angeles, New York, San Francisco, Berlin, Tokyo, Seoul, Singapore and beyond.  He has published numerous books with acclaimed houses including Phaidon, Walker Books, Comme des Géants and Hato Press. In 2016, he published his first monograph with teNeues and launched Nounou with Jae Huh, a Korea-based label producing a wide range of items including clothing, graphic objects, rugs and dolls.

As the spread of COVID-19 accelerates in Africa, the continent’s urban poor are fighting back

WaterAid calls for pandemic response to meet the needs of informal settlements. As the coronavirus outbreak continues to spread in parts of Africa, WaterAid is calling for the voices of the 230 million people living in informal settlements across the continent to be heard, and for the work they are doing to prevent the spread of disease to be recognised, and scaled-up.

Developing countries will have at least $400 billion less to spend on sustainable development including access to safe water, healthcare and education during this year and next due to the impact of Covid-19, according to a new report from End Water Poverty and WaterAid.

WaterAid has commissioned 10 visual artists from across the Global South to interpret the far-reaching impact access to clean water and decent sanitation has on people’s lives and the role these vital basics play in the realisation of other human rights.

Wimbledon Foundation commits £1.2 million to championing clean water for all with WaterAid

The Wimbledon Foundation, the charity of The All England Lawn Tennis Club (AELTC) and The Championships, has committed £1.2 million in a new three-year partnership to help WaterAid in its mission to bring clean water, decent toilets and good hygiene to all by 2030.