Brides of the Well, a film by Shekhar Kapur

Growing up in India, acclaimed film director Shekhar Kapur saw the striking contrast between those struggling to find a reliable, clean water source, while across the road, wealthier homes had endless supplies on tap.

Collaborating with WaterAid, Shekhar tells the story of two teenage girls, Saraswati and Paras in Northern India, who walk 8 hours a day to collect water for their new husbands. Although a fictional story, it is based on the very real, interlinked issues of poverty, lack of access to water and child marriage.

Narrated by Parminder Nagra, well-known for her starring role in Bend it like Beckham, ER and 13 reasons Why, Brides of the Well is told from the perspective of two young girls from a rural village, forced into marriage and a life of servitude.

Quarrels, friendship break-ups and make-ups remind us of their youth, but these girls know that their future is stark until they have access to water. The girls dream of being free from this responsibility. Showing their naivety, they dream that the well will dry up so they don’t have to collect water anymore. Unfortunately, as the story unfolds we see that this is becoming true. But no water close to home will only make lives harder for the young girls and their village.

Globally, one in nine people lack access to clean water. India has a staggering 163 million people – and roughly 81 million women - living without clean water close to home, making it the country with the highest population without this basic resource.

The global water crisis affects women and girls disproportionately. Throughout their lives, they bear the burden of walking long distances to collect water. This often forces them to drop out of school from an early age, missing out on their education and – in some cases – making them vulnerable to child marriage.

These harsh realities are why Shekhar wrote Brides of the Well:

Saraswati and Paras might be works of fiction but their story – of lives centred round collecting water from drying wells – is a daily reality for millions of people across the world.

Each year, more people gain access to clean water, but at the same time India is facing severe water shortages, with 600 million people affected by a variety of challenges including falling groundwater levels, drought, demand from agriculture and industry, and poor water resource management; all of which are likely to intensify as the impacts of climate change take hold.

18-year-old Sanju Mewada from Madhya Pradesh, India is just one of the millions of girls facing the reality of the water crisis. She has been collecting water since she was 7 years old. She had no choice but to wear thin, unsuitable sandals and sometimes had to walk barefoot, several times a day along dangerous paths. 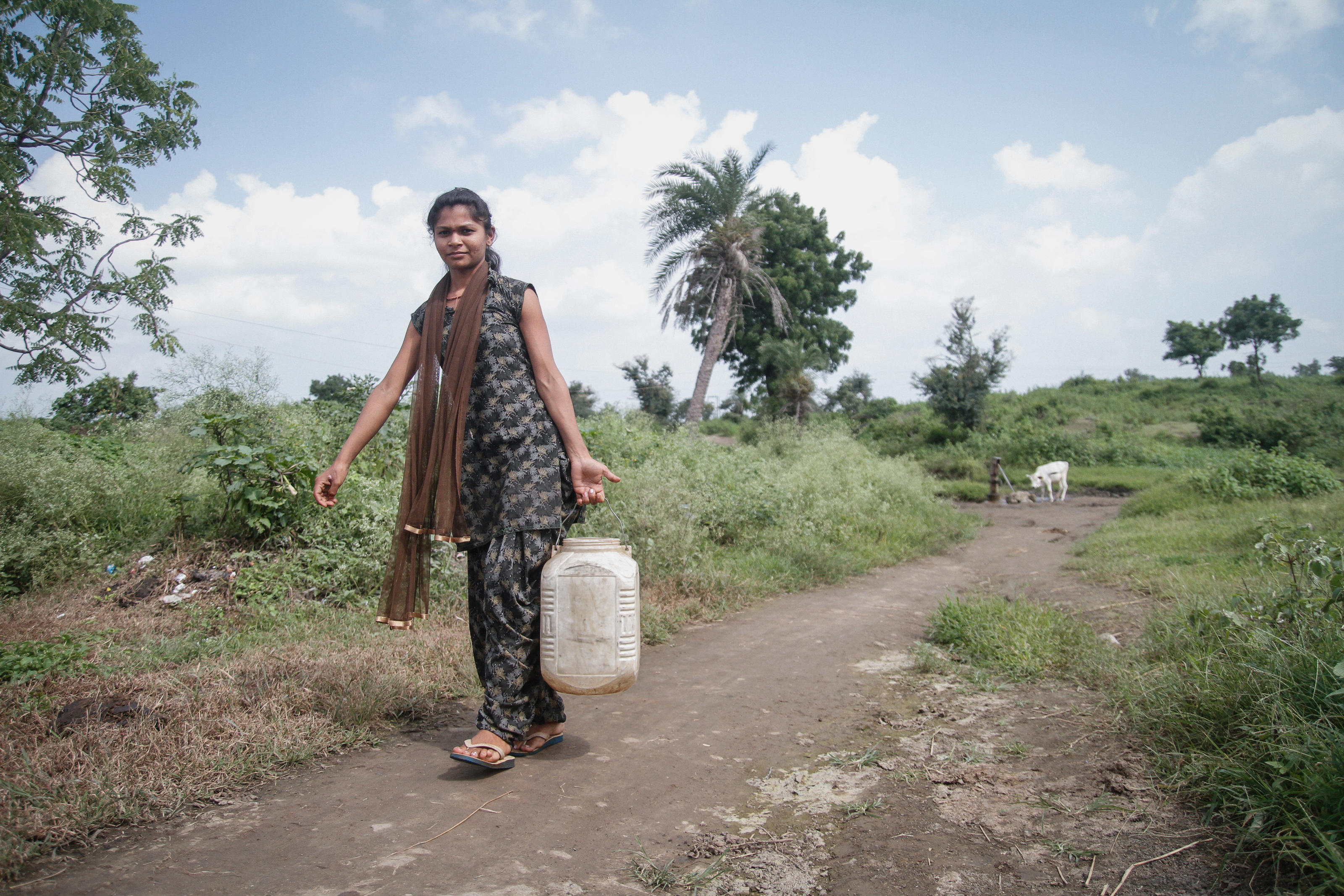 The daily burden of collecting water has had a severe negative effect on her education:

I used to travel 2.5km to collect water from the well each day. Sharp stones would pierce through my soles, and I developed a painful problem on my left side, but while carrying water, I only focused on not spilling a single drop.

Water is much more precious and important than my physical pain. For four months during the water shortages in the summers, I wouldn’t go to school at all, which affected my studies.

Sanju’s village now has several water pumps but these are still problematic outside of monsoon season. She often has to return to the well she has visited since she was a small child.

Like many girls in her community, having to spend hours to collect water has damaged education and opportunities.

WaterAid is laying a pipeline so that Sanju and her community will have a reliable water source close to home, saving her precious time.

Trained by WaterAid, Sanju is now the leader of a youth group that tests water sources to monitor the levels of fluoride, salinity and arsenic to determine whether the water is safe to drink.

WaterAid’s training has also enabled Sanju to teach handwashing skills, promote good hygiene - including good menstrual hygiene - and to challenge damaging taboos about periods. She is now instrumental in helping to empower women and girls to improve the health of the community.

Clean water is a human right that everyone, everywhere should enjoy. It is vital for health and helps keep girls in school. By investing in clean water and decent sanitation, we are investing in future teachers, doctors, and leaders.