Cyclone Idai in Malawi and Mozambique

Cyclone Idai hit Mozambique, Malawi and Zimbabwe on March 14, 2019 and the effects have been devastating for an estimated three million people. Here is a summary of the Cyclone's impact and the effect on WaterAid projects in Mozambique and Malawi. For the latest updates on our response to the emergency, visit our media page.

This is what we know so far:

The Path of the Storm 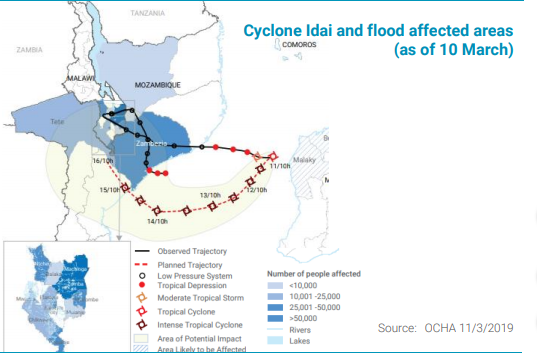 * On March 14-15, 2019, Cyclone Idai made landfall in Beira, Mozambique, flooding thousands of hectares of land and affecting nearly 3 million people across the region. A massive humanitarian effort has been launched, focused on the port city with a population of 500,000 in which an estimated 90% of buildings have been damaged.

* The path of devastation stretches into Zimbabwe and Malawi; heavy rains and flooding have wiped out roads, bridges and dams and displaced entire communities. Many communities affected are remote, rural towns and villages far from the epicentre – and far from the concentrated relief effort.

* In the district of Zambezia, Mozambique, Idai came ashore as a tropical depression even before it gained strength and grew into a cyclone. The heavy rains and flooding have driven more than 10,000 people in this district from their homes, with more flooding expected as the Zambezi River swells from the rainfall. They are now crowding into IDP camps; in camps in Nicoadala district, as many as 19 families are crowded into each tent.

* Waterborne diseases are a huge risk in this crisis, with outbreaks of diarrhoea reported; officials are warning that cholera is inevitable. Five cases of cholera were confirmed on 27 March in Beira, and more are expected to follow.

* More than 300 classrooms in this district have been destroyed, and crops have been flooded out, threatening this region’s livelihood and future.

* Local government is asking for water treatment systems, water pumps and tanks, hygiene kits, rolls of plastic and fuel to help people survive in the camps until they can begin to rebuild.

* Southern Malawi was already struggling after flooding from heavy rain in early March, and the situation was made much worse after Cyclone Idai brought torrential rain and strong wind. An estimated 840,000 people in Malawi have been affected, with 56 dead and more than 94,000 people forced to flee their homes.

* In the southern districts of Chikwawa, Zomba and Machinga, more than 250,000 people have been affected, and at least 90 refugee camps have sprung up. Relying on dirty water and makeshift, unsanitary toilets, people living in these camps are at high risk for cholera and other waterborne diseases.

We are still gathering information on the extent of the damage. In Mozambique, we know that some water points in Zambezia region are currently not functioning or are contaminated by floodwaters, and that some household latrines which were constructed by families themselves have been washed away or left unusable.

In Malawi, households and Early Childhood Development Centers have been affected in an area in which WaterAid is working. Homes in our planned area of work have been lost, and some of the childhood development centers’ infrastructure destroyed. People in these areas are currently living in temporary camps. However, boreholes and other water and sanitation infrastructure in Zomba District were under construction or still in early stages, and have not been seriously impacted. In Machinga District, our areas of work have not been affected.

In both countries, thousands of people are in temporary camps and without enough food, water, shelter or health care. We will be working through partners to alleviate some of these needs, particularly in the areas of water, sanitation and hygiene, to minimize the risk of waterborne diseases such as cholera.

For the latest updates on our response to the emergency, visit our media page.