Report: The most vulnerable countries receive the least funding to tackle climate change and the water crisis

Even less funding is provided to ensure clean water during disasters

March 5, 2020 (New York, NY)—Clean water is the first line of defense against climate impacts, but a new report by WaterAid finds that only 5% of climate finance is spent on adaptation. Even less is spent in the most vulnerable countries, and less still on vital services like clean water, placing billions of lives at risk.

Despite being a basic human right and a first line of defense, a paltry amount of climate finance is currently invested in getting clean water to everyone, everywhere. Money for water, sanitation and hygiene adaptation accounts for just $9 billion, or 1.6%, of total climate finance.

No one can survive without clean water and no one can thrive if they struggle to find it,” says Kelly Parsons, U.S. CEO of WaterAid. “Making sure that people around the world can rely on a supply of clean water is one of the best investments we can make to help people cope with climate change. Lives and livelihoods will be lost if we do not prioritize resilient water systems, which are key to keeping people healthy and productive.

WaterAid is calling for a rapid ten-fold increase in the amount of climate finance spent on getting clean water to those currently forced to live without it, improving their ability to cope with climate impacts.

For the poorest people, the most immediate and widespread impacts of climate change are felt through water in extreme droughts, sea level rises, vast floods and powerful storms. Water systems are uniquely vulnerable as climate change piles more pressure on already overstretched water-sources. Those who have done the least to contribute to global warming are carrying the greatest burden of climate change – most often through droughts and flooding.

Access to clean water is vital to climate change resilience, but the most climate-vulnerable countries have some of the lowest levels of clean water access in the world. Around 800 million people still live without even a village water-pump or covered well close to home. Two billion people live without a water service that is reliable and safe from contamination, putting them at risk of waterborne disease and death.

The need for sustainable safely managed water and sanitation services couldn’t be more urgent as nearly 90% of all natural disasters are water-related. 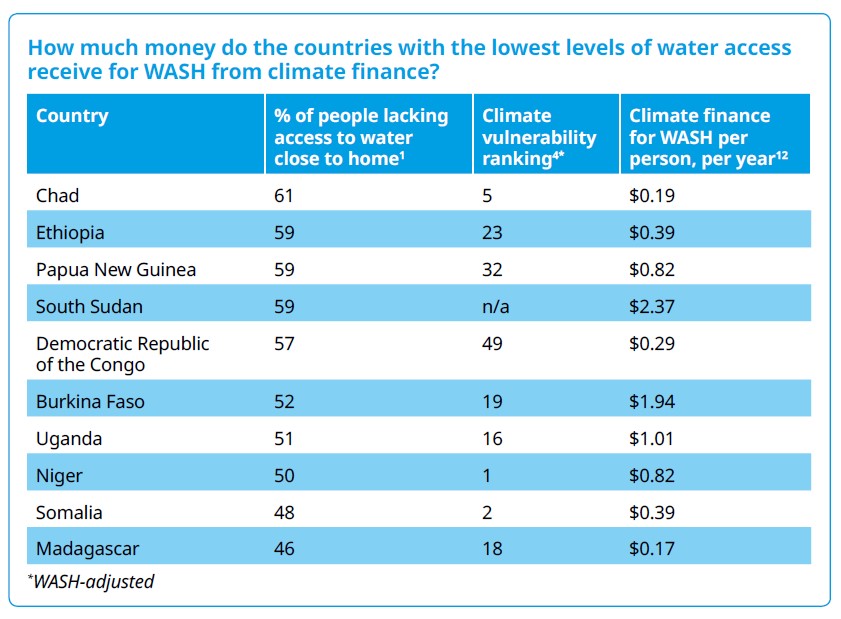 About WaterAid
WaterAid is working to make clean water, decent toilets and good hygiene normal for everyone, everywhere within a generation. The international not-for-profit organisation works in 28 countries to change the lives of the poorest and most marginalised people. Since 1981, WaterAid has reached 27 million people with clean water and 27 million people with decent toilets.