Access denied! Will intent translate into action for persons with disabilities

The current momentum under the Swachh Bharat Mission to make the state of Uttar Pradesh Open Defecation Free is commendable but needs to pay a little more attention to ensure that toilets are accessible to its 4.1 million citizens with disability.

In the heart of Uttar Pradesh’s state capital, Lucknow is the iconic Buddha Park where Akhilesh is balancing his crutches on glazed tiles struggling hard to climb the steps of the public toilet to attend nature’s call. “It is not just this facility but most of the public toilets in this city or I would say even in other cities are also difficult to access for people like me,” says Akhilesh who is working with a vocational training centre for persons with disability. Barely one Kilometre away from Buddha Park at another public toilet near King George Medical College, Dinesh Kumar, a street vendor was sitting helplessly in his wheelchair. A random reality check of various public and community toilets in the city by volunteers during a week-long campaign to identify accessible as well as inclusive public toilets substantiates Akhilesh’s observations and experience. Akhilesh struggles hard to balance his crutches on tiles as well as steps in order to access a public toilet in Daliganj, an area in the heart of Lucknow, the state capital of Uttar Pradesh.

The UN Convention on the Rights of Persons with Disabilities and its Optional Protocol (A/RES/61/106) and the National Policy for Persons with Disability 2006, recognizes that Persons with Disabilities (PwDs) are valuable human resources for the country and seeks to create an environment that provides them equal opportunities as well as protection of their rights and their full participation in society. It is in consonance with the basic principles of equality, freedom, justice, and dignity of all individuals enshrined in the Constitution of India implicitly mandating an inclusive society for all, including persons with disabilities. But even after a decade of such commitments and resolutions made by the government at the global and national level, people with disability yearn for the basics — accessibility to public spaces and facilities.

The share of persons with disability in the country’s total population is 2.21%. The highest number of disabled persons (4.1 million or 15.5% of country’s PwD population) is from the State of Uttar Pradesh[1].  The strong commitment of the government towards making the state of Uttar Pradesh Open Defecation Free (ODF) has led to huge investments and mobilisation towards the construction of household and public toilets. To reach the mammoth target of building 1.55 crore toilets by October 2, 2018, the state will have to construct on an average 44,000 toilets every day. The ability to achieve this target was ably demonstrated by the state when a record 3.52 lakh toilets were constructed within a span of just 17 days in a special countrywide campaign under the Swachh Bharat Mission from September 15 to October 2, 2017.

The state from time to time has issued instructions to ensure that accessibility is factored in while constructing toilets both at the household level as well as the community level in rural and urban spaces. The Chief Secretaries of the state twice instructed district authorities, on May 28, 2012, and on June 10, 2014, to ensure that accessibility for persons with disability is taken into account for public spaces and facilities. However in the rush to meet the targets, care to ensure an inclusive design in the construction of toilets seems to be nowhere in the priority at the ground level, at least till now. In the state capital alone there are 350 community and public toilets with around 3000 seats (still much lower than the number required) but less than 5% have provisions such as ramps to facilitate access.

“Unavailability of accessible facilities causes a lot of difficulties in the day-to-day life of Persons with Disabilities,” says Suraj Yadav, who leads Uttar Pradesh Viklang Manch (UPVM), a pan UP collective having a membership strength of 45,000 of PwDs. During a discussion with UPVM members, it emerges that 90% of facilities are inaccessible to Persons with Disabilities especially to tricycle users, visually impaired persons, and crutch and wheelchair users.  UPVM aims to make accessible toilets as one of its key advocacy demands for its meeting with the Chief Minister scheduled in December 2017. 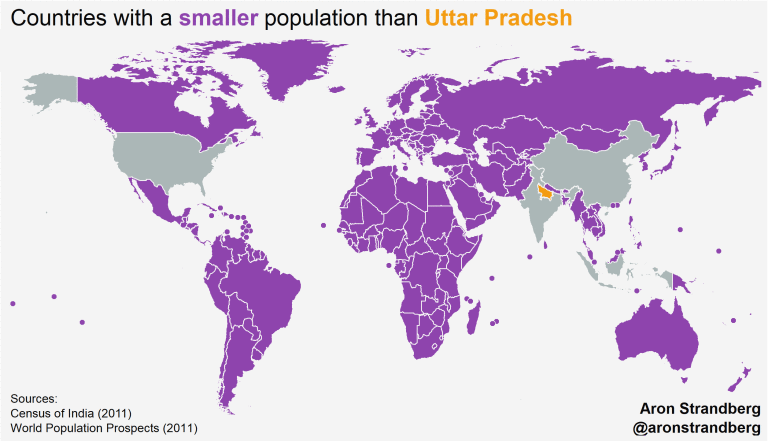 Countries with a smaller population than Uttar Pradesh

The initiatives taken by the State Swachh Bharat Mission Directorate such as the dissemination of technical manuals on toilet designs for people with disability, as well as conscious efforts to train masons on how to build PwD friendly toilets along with the construction of demo toilets for learning and replication towards promoting inclusive toilets are appreciable. But the mapping of households having persons with disability, provisioning of additional resources towards incentives for toilets under the Swachh Bharat Mission (heard there are ongoing discussions at the Ministry level to increase the incentives for PwD toilets) or dovetailing with other schemes or funds will be critical to ensure that intent translates into affirmative action.

During his message on World Toilet Day, Léo Heller, Special Rapporteur on the human rights to safe drinking water and sanitation aptly states that, “Access to adequate and equitable sanitation and hygiene for all, and end open defecation was adopted as one of the targets of Sustainable Development Goals. It is not only about constructing toilets or sewerage. It is about understanding people’s needs and finding safe and sustainable solutions that ensure everyone’s dignity.”

With over 200 million people, Uttar Pradesh is the most populous state in India. In fact, it would have been fifth most populous country had it been an independent nation, hence a positive change in any indicators under SDGs in Uttar Pradesh will have a significant positive influence on national and global performance with respect to SDGs including Goal#6.

Singing his way to construct toilets!

Together, making a lasting impact!

What do we mean by ‘improving sanitation’?