Diseases linked to dirty water and the lack of safe toilets are the fifth biggest global killers of women, according to new analysis released today by the international development organisation WaterAid.

This hidden killer causes more deaths among women than diabetes, HIV/AIDS or breast cancer, taking a woman’s life every 40 seconds.

A WaterAid analysis of Institute of Health Metrics figures, released just ahead of International Women’s Day, identified the Top 10 deadliest diseases for women across the globe.

Illnesses related to a lack of water, basic sanitation and hygiene were responsible for the deaths of almost 800,000 women around the world in a single year – making it the fifth biggest killer of women behind heart disease, stroke, lower respiratory infections and chronic obstructive pulmonary disease. Some 88% of all diarrhoeal diseases and half of all nutritional deficiencies* are related to the lack of these basic services.

Top 10 causes of death for women 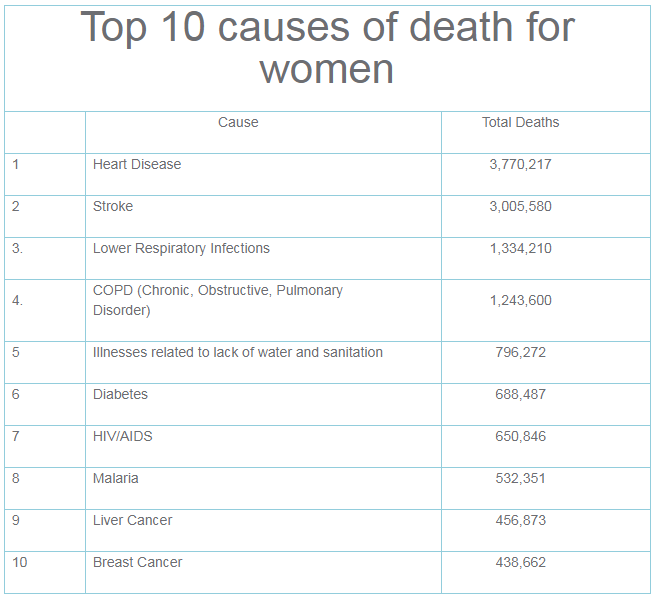 "These figures highlight the plight of the one in ten women and girls around the globe still living without access to clean drinking water and the one in three still living without access to decent toilets. This completely unacceptable situation affects women and girls’ education, their health, their dignity and ultimately, in too many cases, results in an early and needless death.

"On this day when we celebrate the achievements of women, it really is a disgrace that so many women and girls are denied their basic human rights to access to water and sanitation."

Women and girls bear a disproportionate amount of the burden created when there is no clean water, safe private toilets or way to keep themselves and their surroundings clean.

Finding water is often considered ‘women’s work’ and in many of the world’s poorest countries, women spend hours every day trekking for water – time which could otherwise be spent getting an education, caring for their families or on income-generating work, helping lift themselves and their families out of poverty.

Women and girls who have no safe, private place to relieve themselves are also at increased risk of harassment or assault. Women and girls without toilets spend an estimated 97 billion hours each year trying to find a safe place to go.

WaterAid is advocating for water and sanitation to remain a dedicated goal in the Sustainable Development Goals, which are currently under negotiation at the UN, as well as inclusion in goals on health, education and gender rights.

These global goals, which aim to eradicate extreme poverty by 2030, are to pick up from the current Millennium Development Goals at the end of 2015.

WaterAid is part of action/2015, a global movement of 1,200 organisations in 125 countries working to ensure a better future for people and our planet in this transformative year for tackling poverty, inequality and climate change.

On International Women’s Day the action/2015 movement is highlighting that the UN summit to adopt Sustainable Development Goals could prove to be the single most important negotiation for women in history. Along with the Paris climate change summit, 2015 offers an unprecedented opportunity to dramatically transform the lives of women and girls and fulfill their human rights.

WaterAid statement on the passing of Her Majesty The Queen

Bring trillions of dollars to developing country economies by making clean water, decent toilets and hygiene available for all - report