Celebrating 10 years of water and sanitation as a human right, with 10 photographers from Nigeria around the world

Ten years ago, the United Nations General Assembly officially recognised the human right to water and sanitation. This means governments should be held to account if citizens are denied access to these essential services.

It seems unimaginable that such basic things, which allow people to thrive, were only officially recognised so recently. However, it was a huge triumph and positive step in galvanising action to ensure everyone, everywhere has access to water, sanitation and hygiene.

While progress has been made around the world over the last decade, 785 million people still don’t have clean water close to home and 2 billion people don't have a decent toilet of their own.

To mark the progress, and to highlight how far the world still has to go, we commissioned ten visual artists, including two from Nigeria, to each produce one original new work on the subject of water and sanitation as a human right.

We are using these striking new images to call on governments around the world to double their investments in providing clean water and good hygiene to those most in need, which takes on a renewed urgency in response to the COVID-19 pandemic.

The photographers come from countries across the Global South and diaspora communities, bringing personal perspectives on identity, race and representation to the central theme of what life is like with or without clean water and decent sanitation.

Dafe Oboro is a filmmaker, photographer and producer based in Lagos, Nigeria. He documents communities and youth culture on the streets of Lagos focusing on culture and identity, as well as the themes of masculinity and social marginalisation.

Dafe's image touches on the subject of bathing and the importance of having access to clean water to perform this daily ritual.

He considers the work a tribute to the workers he sees around him in Lagos - the mechanics, the plumbers and the bricklayers - who bathe, with their shorts on, behind parked buses. They don’t have easy access to clean running water but they strive to find enough water to bathe in. Much needed after a long day’s work. 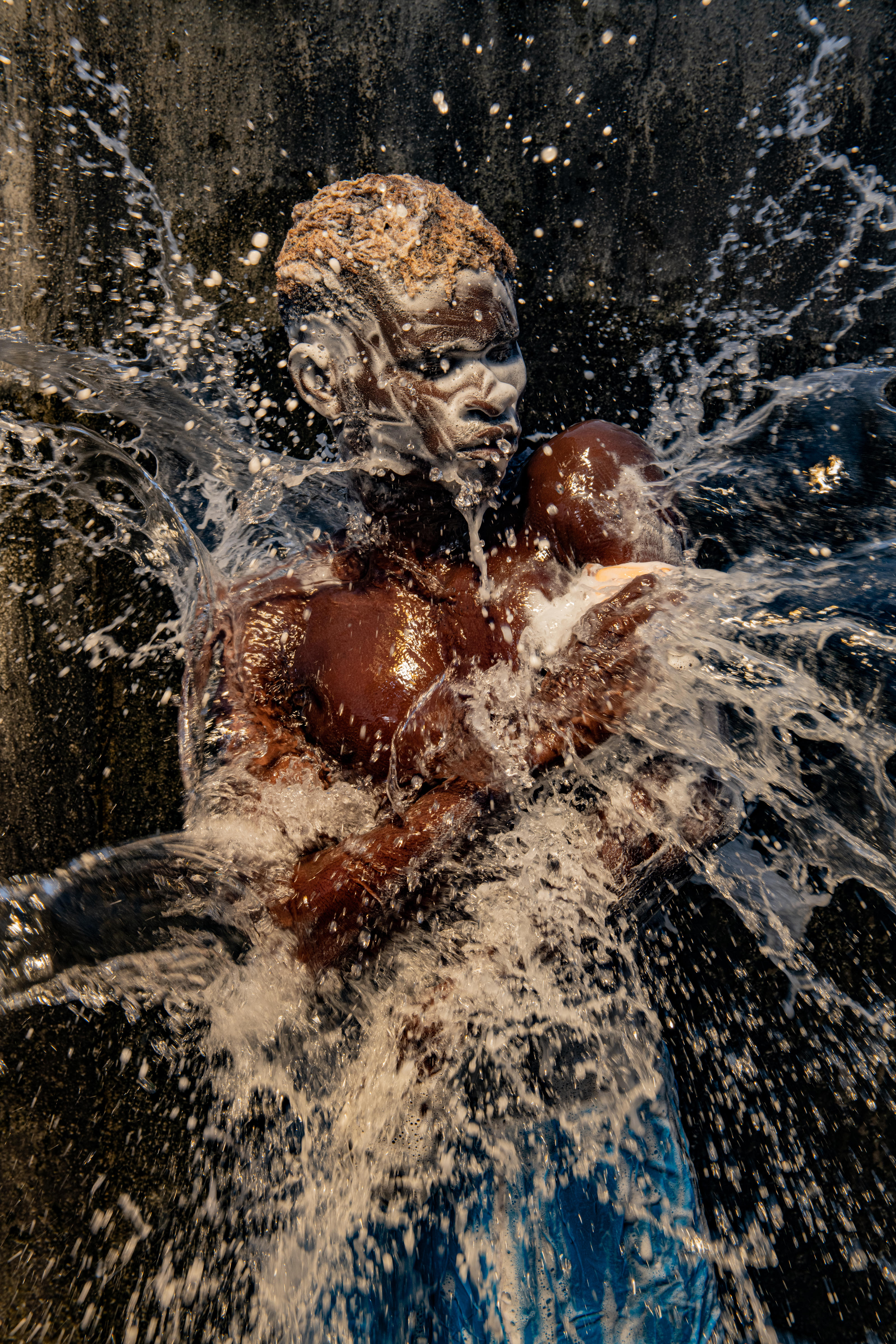 Multimedia artist Joseph Obanubi, who is also based in Lagos, Nigeria, chose to focus on the impact a lack of access to clean water can have on women and girls, who are usually responsible for water collection. Joseph also created a second piece, which highlights the risks of open defecation:

“For many communities, water sources are usually far from their homes, and it typically falls to women and girls to spend much of their time and energy fetching water, a task which exposes them to attack from men and even wild animals. They also have to find a place to go to the toilet outside, often having to wait until the cover of darkness, which can leave them vulnerable to abuse and sexual assault.

“I wanted to communicate the right to clean water and hygiene with symbolic elements and a blend of the surreal. I employed symbolism and futurism in an Afro context. The head is a symbolic part of the body in the Nigerian-Yoruba culture.”

Serge Attukwei Clottey is a Ghanaian artist who works within installation, performance, photography and sculpture, using found and recycled everyday objects. He has exhibited all over the world and his work has been featured in numerous prestigious publications.

He produced an image using the yellow plastic jerry cans people use for collecting water in Ghana, where 1 in 5 lack access to clean water. He is passionate about exploring attitudes to climate change in Ghana. He explained:

“In Ghana, the streets are filled with children carrying yellow buckets on their heads, on their way to a fountain. Every day I would see women and children pour in by the hundreds.

“I want this photo to demand social justice by exposing environmental problems in today’s society. It inspires the human spirit by calling people to action. My work combines activism and art, addressing society’s cultural, political, and economic inadequacies on climate change. The art implicates both the individual and the government. It urges people into action and attempts to rectify the current state of ignorance.

“Every second across the world, someone leaves a tap running, takes a long shower, or pours out some unwanted water.  Every day in Ghana – the streets are filled with children carrying yellow buckets." 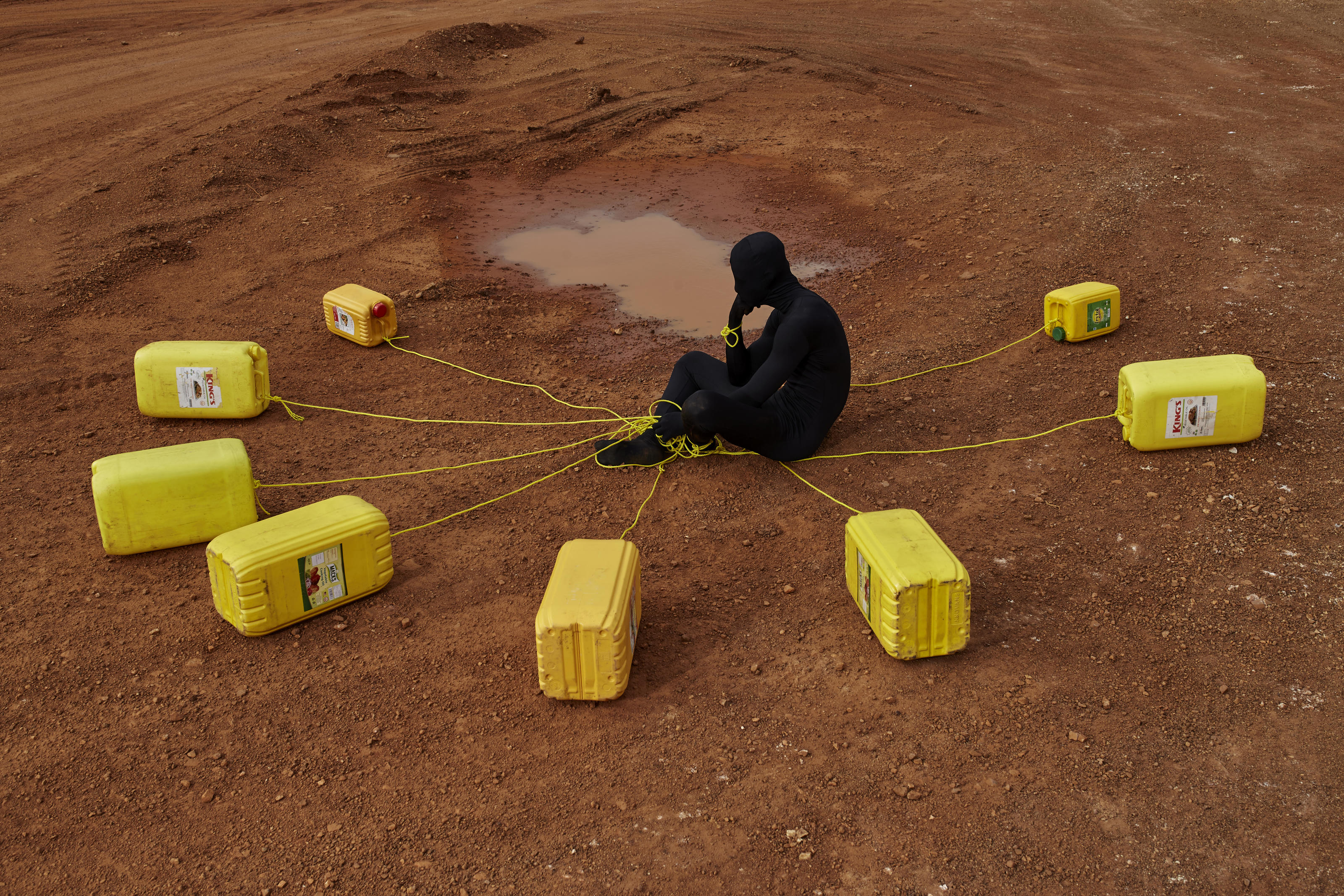 Collin Sekajugo is a Ugandan multidisciplinary artist living and working in Rwanda and Uganda. His work is rooted in the community and explores issues of social, cultural, economic and political identity. He has exhibited around the world and won several awards including the Human Rights Award, Uganda in 2019, and he founded RWAndA-n-Art Magazine in 2010.

Of his piece 'All On Her', Collin said: “I have always found the jerry can to be such a symbolic item in African homes. In almost every community it’s used for trading consumer commodities - most importantly it’s commonly used for fetching and storing water. I have grown to believe that a home without a jerry can is unliveable.

“This artwork speaks to the symbolism of a jerry can versus its importance in accessing clean water and observing sanitation. It is dedicated to all the women and children, especially young girls – who, on a daily basis, walk miles in search for clean water to sustain their families’ wellbeing.”

Saidou Dicko is a self-taught visual artist from Burkina Faso who lives in Paris.

He has won several awards and exhibited his work throughout the world such as at Dak’Art 2008, the 8th Biennial of contemporary African Art. In 2012, he co-founded the collective "Rendez-Vous of Artists".

Through the sale of his artwork, Saïdou financially supports an association in north Burkina Faso which keeps a community borehole working and has set up a community kitchen garden. 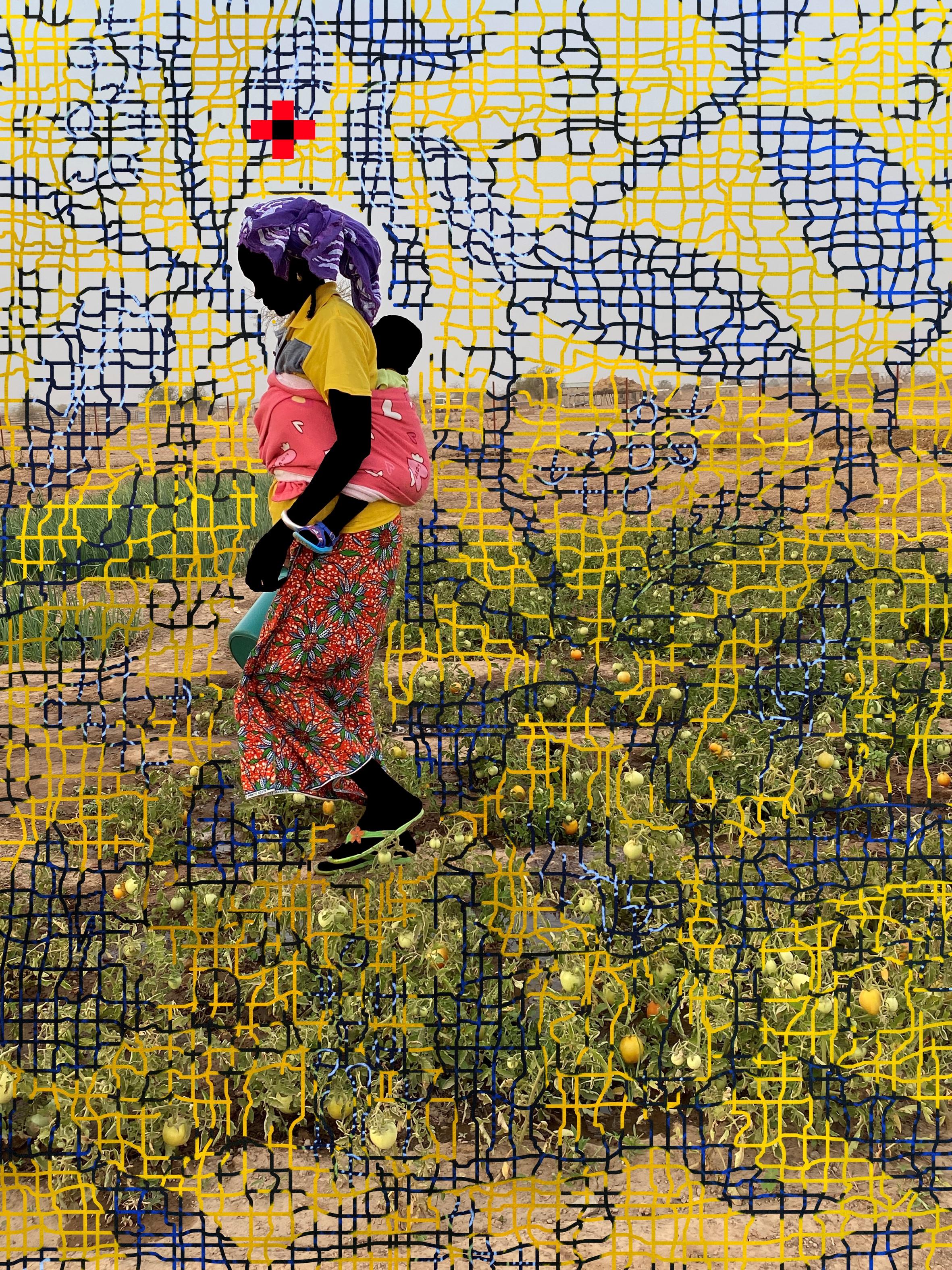 Cristina de Middel is a Spanish documentary photographer based in both Mexico and Brazil. Cristina creates fictional scenes based on reality in her photographs.

Cristina said: “I wanted to use the beautiful light of the afternoon and work with one of my neighbours, Gaetano.

“I wanted to reflect on the fact that the abundance of water does not necessarily mean a good quality of water. I live in a small town in the state of Bahía, Brazil and we’re in the middle of the rainy season. Here water is a utility but also an important part of the landscape and the culture. There is water everywhere but it rains with such intensity that the water system collapses often and there is no water at home.

"Gaetano is a young boy who has the same problems as we all have here: water supply is inconsistent, it depends on the season and the basic infrastructure of the town.” 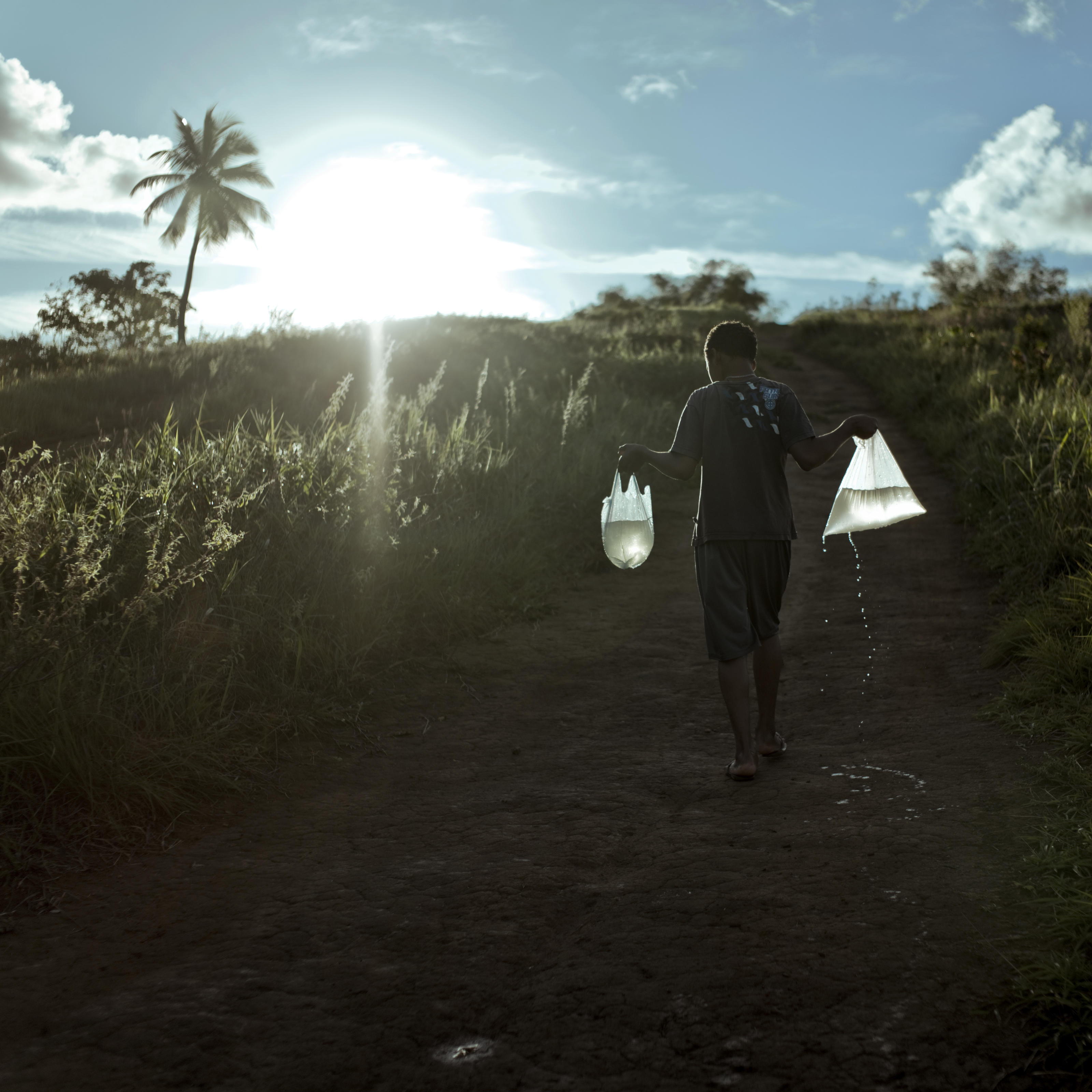 Henry J Kamara is a British-Sierra Leonean visual storyteller. He explores the complexities of identity, race and class through his work, and has recently focused his lens on his experience of diaspora and reconnecting with his motherland, Sierra Leone. His works have been featured in numerous publications such as the Guardian, Observer and Aesthetica Magazine.

"In the past, Bonthe Island in Sierra Leone was a thriving trade hub and economic centre. In the 80s palm products and seafood became major industries. During the two world wars the French and English navy used the town as a base.

"This Victorian water pump is a reminder that the right to clean water and decent toilets is a luxury afforded only to those who are fortunate. The time to change this is now.

Above all, it is the world leaders who must accept responsibility. It was just 10 years ago that the right to clean water and toilets was declared by the UN as inalienable human right. Therefore, they must do more to ensure that the infrastructure that will enable sovereignty and access to water is available to everyone, not just some." 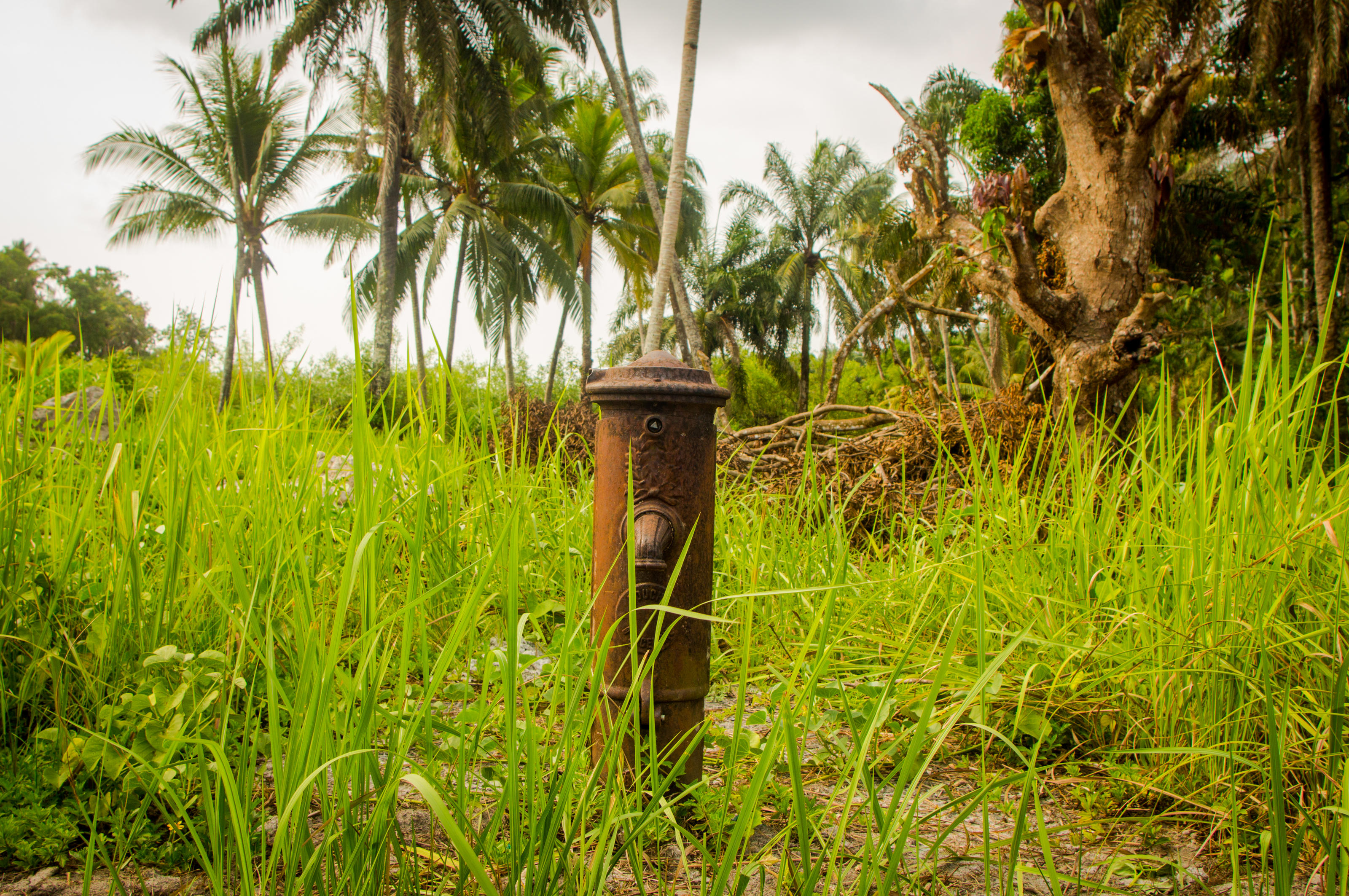 Also featuring in WaterAid’s collection are:

Globally, a staggering 3 billion people do not have the facilities to wash their hands with soap and water at home, the first line of defence against diseases like COVID-19.

Although Nigeria has made some progress in the 10 years since water and sanitation were declared as human rights – 70% now have access to basic water supply services and 46% to basic sanitation compared to 58% and 32% respectively 10 years ago – our leaders can and must do more. We are calling on the Nigerian government and world leaders to take action NOW and DOUBLE their current investments in providing clean water and decent hygiene to those most at need. This is particularly crucial in response to the global COVID-19 pandemic. Together, we need to make sure that everyone, everywhere has these basic essentials. Not just during this devastating outbreak, but long into the future.