The sanitation problem: a glance at community-led solutions

A snapshot on Uganda’s sanitation

According to the Ministry of Water and Enviroment’s Sector Performance Report 2020, Uganda has made progress with access to improved sanitation in rural and urban areas at 78% and 89.1% respectively. However, the use of safely managed sanitation which hygienically separates human excreta from human contact is still very low with rural and urban areas at 7.1% and 39.2% respectively.
Furthermore, 8 in 10 people don’t have a decent toilet, making it significantly difficult to maintain good hygiene. Without decent toilets, many people are forced to practice open defecation which is undignified, unsafe and pollutes nearby water sources.
Amidst it all, a few communities are pulling together to change the situation.

Provoked by the sanitation crisis in his community in Kamwokya, located right in the heart of Kampala, Chris Tumwine, a community Water, Sanitation and Hygiene (WASH) advocate asked, "how do we fix it?"

It was a powerful question. Chris has experienced two sides of Kampala, the one with better sanitation services, and the one that he describes as off-the-tarmac. The latter, where he has spent most of his life, suffers from the impact of a poor sewer system, poor garbage disposal, and flooding.

Armed with will-power and the courage to impact change, Chris joined the Weyonje Campaign, which translates to “clean yourself.” Weyonje is a movement that champions inclusive sanitation and hygiene awareness in communities across Kampala. The campaign is an initiative of the Kampala Capital City Authority and WaterAid Uganda is among the partners that support this campaign.

In an interview with the Uganda Broadcasting Corporation, a local TV station, Chris shared that he joined this initiative to educate people on how to improve their sanitation and hygiene. 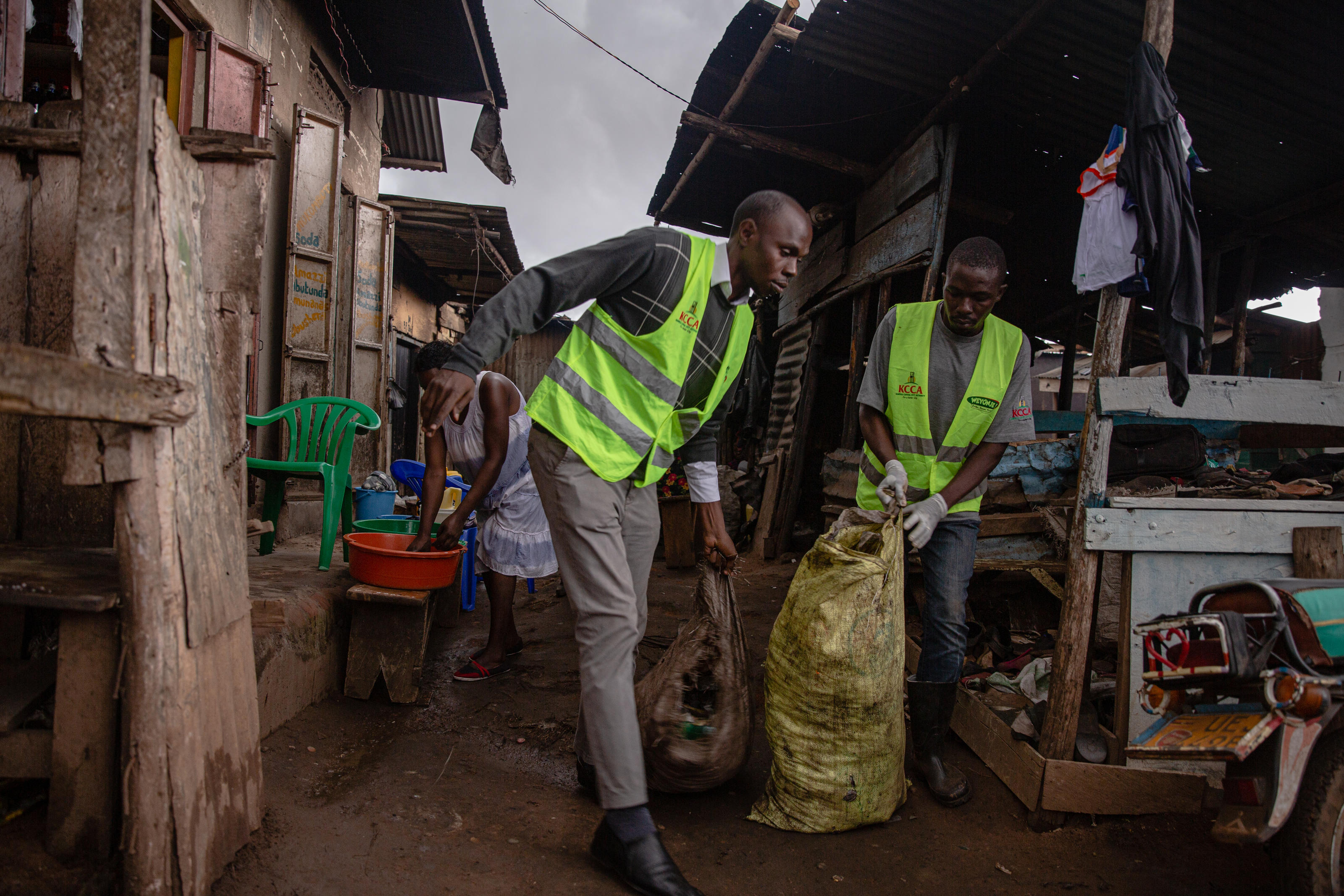 Even if Chris has lived in Kamwokya most of his life, certain situations seem almost amusing to him. For instance, on a mission to share more about sanitation and hygiene at a community church in Kamwokya, Chris shared his dismay:

This is a church sitting on top of garbage… it is soft as if you're moving on a mattress, but a mattress of garbage

Further, he expressed disappointment in the church’s toilet and explained that there is nothing good about it, or its setting. Almost immediately, Chris and his team of volunteers moved to demolish the hazardous toilet.

Although the church's pastor appeared to agree with Chris, he had reservations.

"It's the right (thing to do), but it's also painful because it was done at a time when I was not ready to construct a proper toilet," the pastor said.

Chris was well-aware of the pastor's sentiments, but according to him, the right thing to do, should not wait.

According to Sserunjogi Charles Musoke, the Mayor of the Kampala Central Division, the issue is complacency.

Through the support of the Kampala Capital City Authority, a bigger Weyonje team was assembled in Kamwokya to help spread the WASH gospel. Although there was a small degree of resistance from the community, the team worked hard to offer sensitization on who they are, until buy-in was achieved.

According to Susan, a member of the Weyonje team, people welcomed the campaign and its objectives. Susan's dream is to have a community where you would look around and not see anything unsanitary. At the end of it all, Susan hopes that Weyonje’s work would reduce on the number of people going to the hospital for preventable diseases like diarrhoea.

The Weyonje campaign is a direct reflection of the government's commitment to making public health a priority. According to the mayor, the authority is devoting more budgetary resources towards managing proper sanitation in the city.

"We could not do it alone, We have partners, and one of them is WaterAid. They are taking me for training as a politician, so that I can enhance and help other politicians to appreciate the importance of good sanitation," said Musoke. 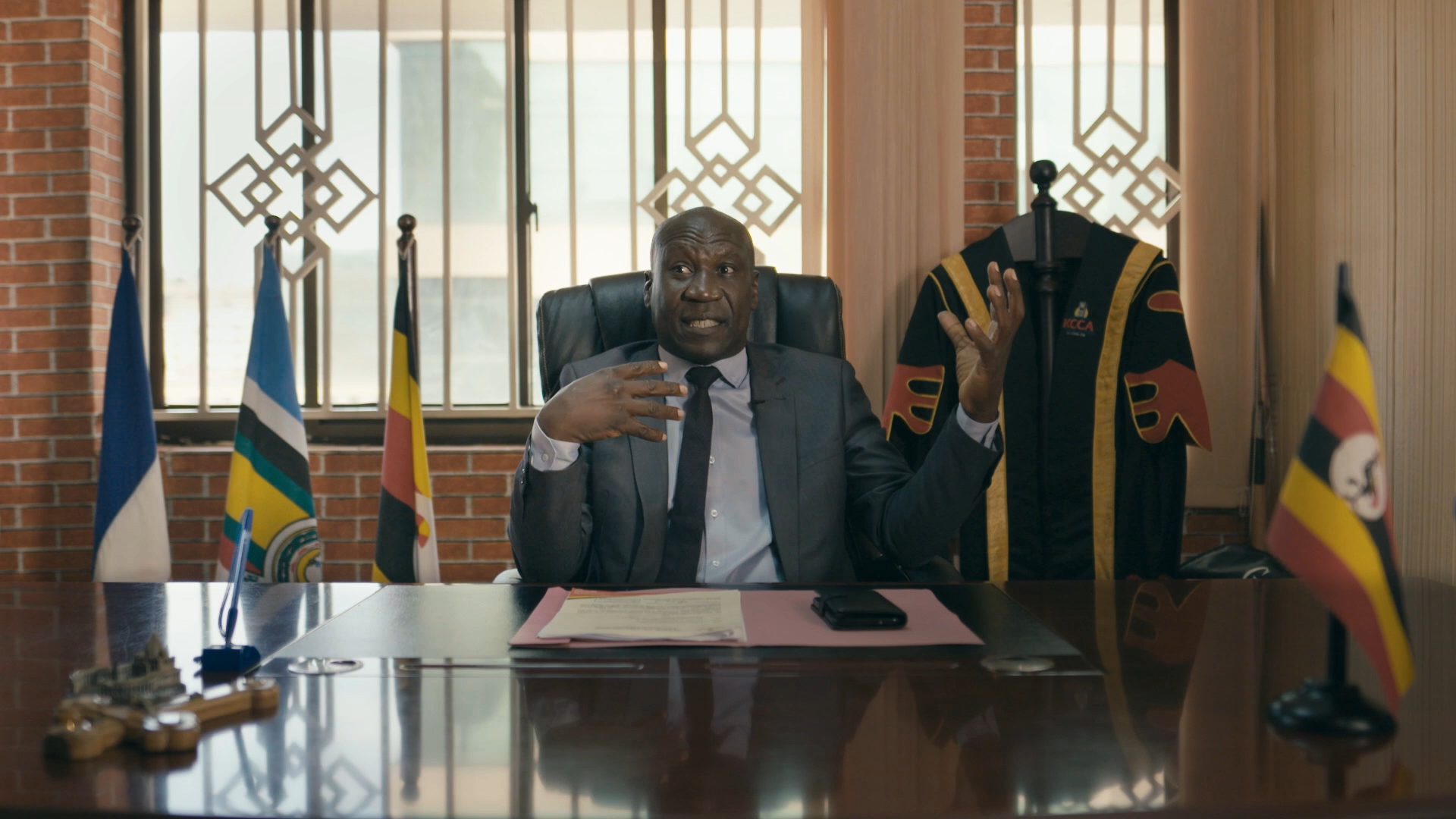 It takes a village

To ensure sustainability, Chris reached out to other community leaders like Patrick Mavo aka Ticha Mavo, the founder of Ghetto Research lab. Mavo’s organization develops innovative projects that improve the lives of impoverished residents in Kamwokya while solving environmental pollution. According to him, their organization hires over 400 youth who collect would-be-waste and use it to create jobs and wealth.

We are creating sustainability in the ghetto, we work with Weyonje on different projects because we are birds of the same feathers.

Through working with other community leaders like Mavo and government actors like the mayor and KCCA, Chris and the Weyonje team were able to convince the residents of Kamwokya to come together and sign The Kamwokya Sanitation Declaration. It was a declaration to build toilets where necessary, and a commitment to keep them clean at all times – a significant step towards achieving sustainable urban WASH.

On his journey to impact change in Kamwokya, Chris did not get all the answers, but he learned a critical lesson that would shed light on the road ahead – it takes a village "to fix it."

Kamwokya is home to more than 6,000 people and is less than half a square kilometre of land. So, it’s easy to see how social distancing and following standard operation procedures can be difficult. However, that won’t stop the Weyonje team from trying.

“In Kamwokya we already have a community WhatsApp group where people share information. This is a good platform that we can use to counter misinformation about COVID-19 that is circulating on social media,” said Chris.

He added that his team carries out house to house community education which aims to teach residents that proper and regular handwashing with water and soap is a formidable defense against the spread of COVID-19.

Lastly, since many homes in the Kamwokya community don’t have quick access to water sources, the Weyonje team has creates makeshift handwashing stations. They fill plastic bottles with soap and water and tie them to the front doors of residents with strings. Through this, the residents can wash their hands properly before entering their homes. 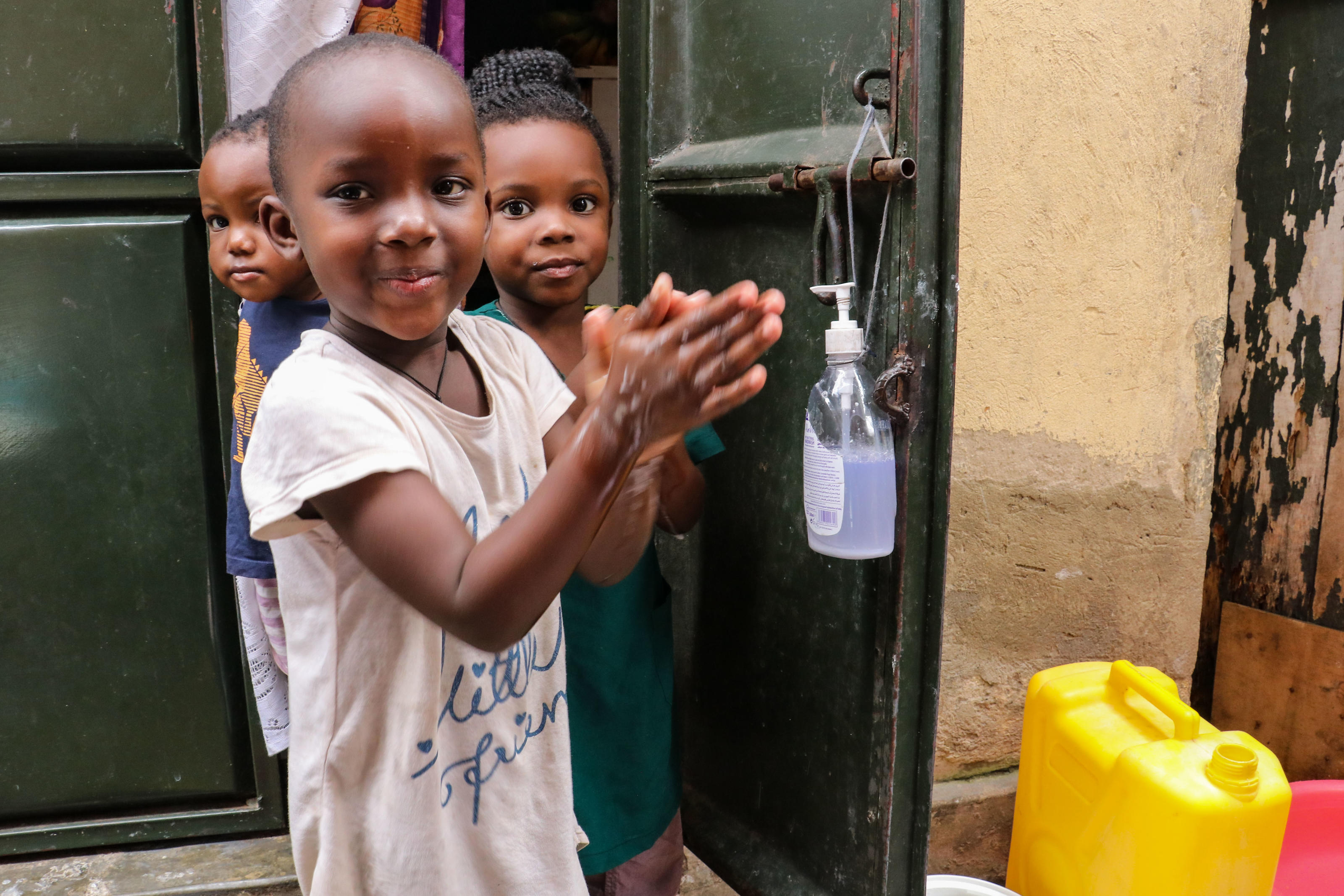 Maria 5, and Tendo, 4, have learnt the habit of regularly washing their hands whenever they arrive back home from playing with their friends, Kamwokya II Ward, Central Division, Kampala City, Uganda. Covid-19 response. April 2020.
WaterAid/ James Kiyimba

Weyonje’s work is supported by the H&M Foundation as part of WaterAid's Sustainable WASH programme. Since 2017, the H&M Foundation has donated SEK 16 million which is the equivalent of USD 1.8 million to the Sustainable WASH programme in Uganda. The funding aims to improve access to clean water, decent toilets and good hygiene in a long-lasting way. The programme tries to make sure people at all levels, from the government, to civil society, to the private sector, have the resources and skills they need to play their part in improving access to WASH.

Watch our video on Weyonje

Climate change: it's not too late to turn the tide

Our climate is changing at an alarming rate, and extreme weather events have caused devastating effects both here in Uganda and around the world – but, working together, it's not too late to turn the tide.

The application of innovation for sustainable and inclusive sanitation in schools

Confronted by the challenge of finding a holistic solution to the sustainable WASH question, WaterAid Uganda has partnered with the Kampala Capital City Authority (KCCA) to develop the Single Flush Female-Friendly Toilet.

In partnership with the Ugandan Ministry of Water and Environment, and thanks to support from the Conrad N. Hilton Foundation, we’ve successfully delivered a pilot scheme to install new plastic hand pump pipes in selected communities across Masindi – so transforming access to safe water for years to come.