Picture this: you’re in class at school when you suddenly need the loo. The only toilet block is outside the main school building and when you’ve finally navigated your way to it, you find the door is narrow and has steps leading up to it. You can’t get in. Why? Because you use a wheelchair.

Or another scenario: you have no direct water supply in your home. There's a meeting to discuss building new water points in your neighbourhood, but you aren't invited to it simply because you're a person with a disability and not usually included in these sorts of decisions.  Yet if that water point isn't designed well, clean water will be close by, but you won't be able to access it.

Finding a decent toilet to use or clean water to drink and wash with is still a daily struggle for too many people around the world. But for the nearly one billion people in the world who have a disability, 80% of whom live in low income countries, that challenge is even bigger. Because even where there are toilets or water sources, all too often they are not accessible for them.

When people with disabilities are left out of decision making, ignored in consultations or faced with inaccessible facilities, it has the knock-on effect of worsening inequality throughout society.

The scenarios we just described so often lead to children dropping out of school, because they aren’t supported in their needs. Or adults being isolated in their homes and staying reliant on others to help them meet their most basic needs. With no education or independence, hopes for a career and a decent livelihood are ruined, trapping people in a cycle of poverty they cannot lift themselves out of.

It’s still a problem in the UK too – so many public places and services, like supermarkets, cinemas and public transport are not adequately equipped to cater for people with disabilities. 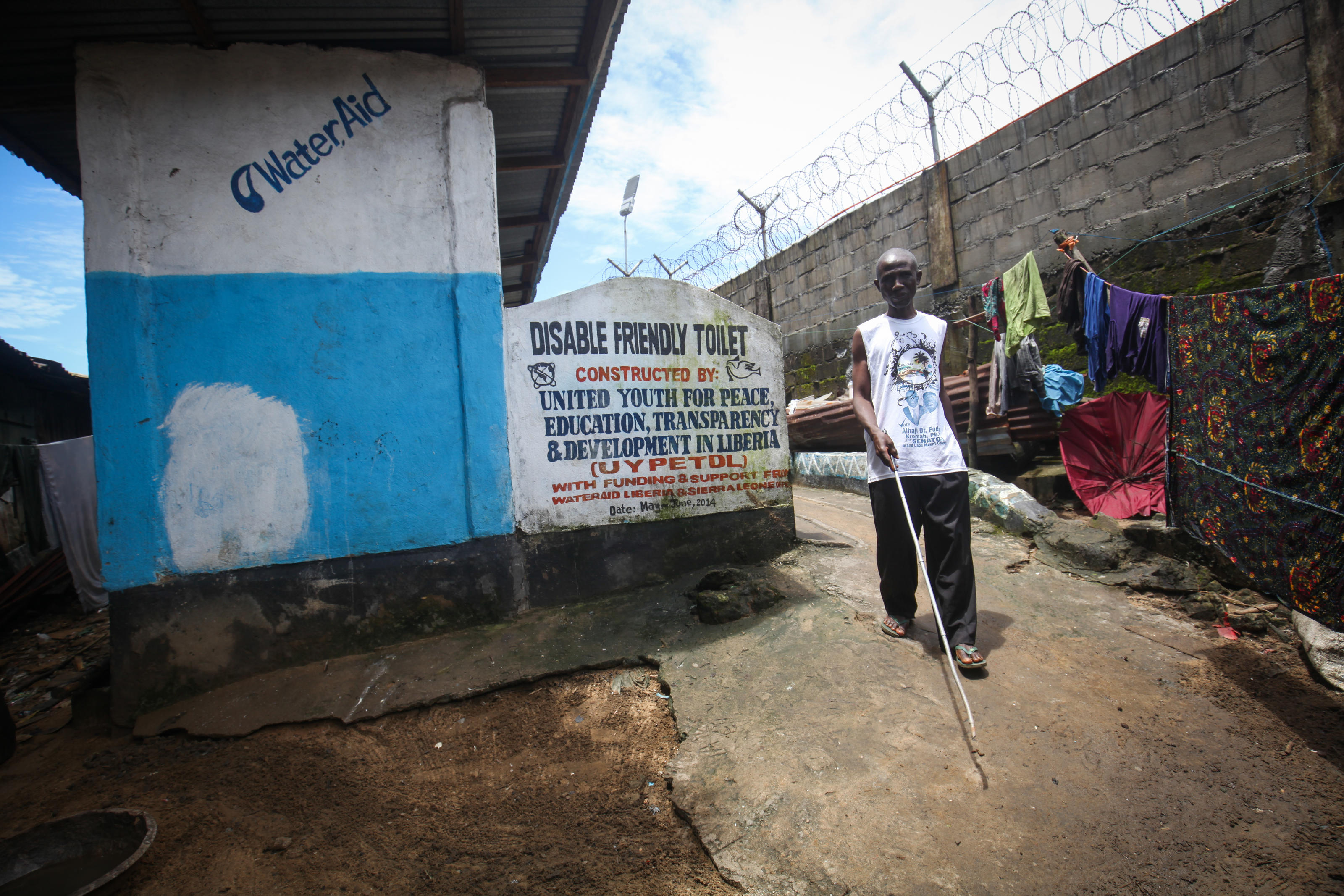 After their community spoke to the local government office, we helped United Youth for Peace, Education, Transparency and Development build a disabled-friendly toilet in Monrovia, Liberia. The new toilet has led to far more independence and dignity for people like Johnson (above), who is blind, and used to have to ask people to take him to the toilet.

This week, the UK Government co-hosted the first ever global summit on disability, announced by International Development Secretary Penny Mordaunt in sign language:

“For too long, in the world’s poorest countries, disabled people have not been able to reach their full potential because of stigma or not enough practical support.”

We could not agree more.

At WaterAid, our mission is to make clean water, decent toilets and good hygiene a reality for everyone, everywhere by 2030. We know this cannot be achieved if we do not focus on those people who are currently most excluded – including those with disabilities – so they can have the same basic human rights that so many others around the world already enjoy.

The only facilities in Maria’s (above) school in Kampala, Uganda were squat toilets. Because she has one leg, going to the toilet was painful and awkward, so Maria would wait until she was home to relieve herself. Working with our  partner Community Integrated Development Initiatives, WaterAid helped build a sitting toilet with a handrail at her school which is far easier to use. She says she wishes all schools had a toilet like this for people with physical disabilities.

Given that there are at least one billion people with diabilities around the world, why are their needs still being ignored by governments and service providers? Why are their fundamental rights of going to the toilet or getting clean water safely and easily not fulfilled?

At its heart, the problem is about stigma and attitudes towards people with disabilities.

We need to work harder on dispelling the stigma and breaking down the negative stereotypes and misconceptions about disability everywhere. We’ve begun researching, for example, what barriers girls in Nepal who are both living with an intellectual impairment and starting menstruation face. Based on the findings, we'll be piloting new ways of supporting people with intellectual disabilities to understand and manage their periods and hygiene needs. 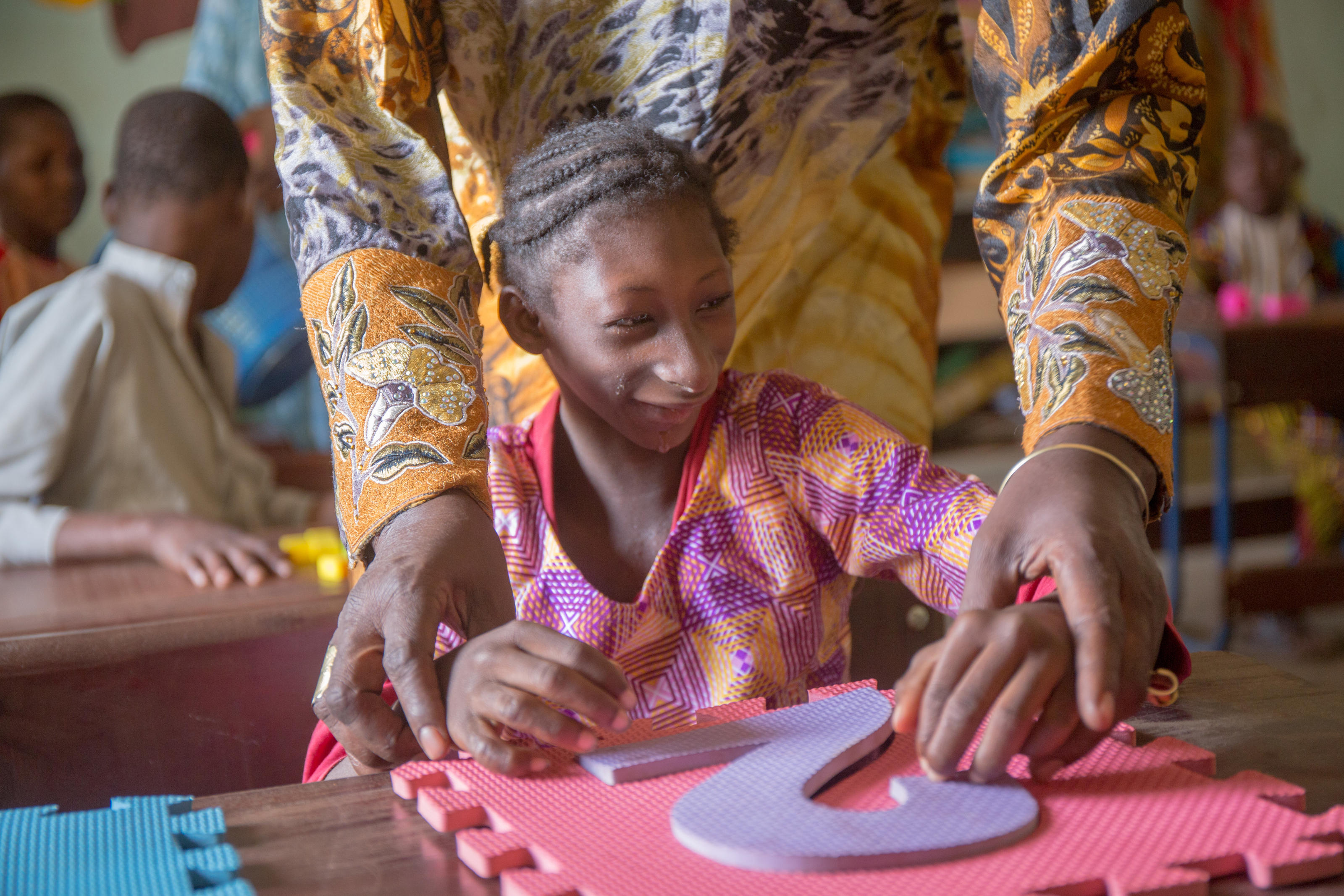 At a centre for children with intellectual impairments in Mali (above), new taps and toilets have had a positive impact on the pupils. Sougalo Tarore, head of the centre, explained “since the improvement in the WASH [water, sanitation and hygiene] situation, I noticed that the children's stress has decreased”. Many of them, who had never seen a tap before, are also learning how to use them properly to clean with and to drink from.

Find out more about our work on equality and disability >

Lockdown with my children at home in Uganda

A birthday during lockdown in Malawi

Fundraising
12 May 2020
by
Lizzie Griffiths

Tap-shaped running, maths lessons and squatting while lifting your relatives: inspiration for fundraising from home

The ups and downs of life under lockdown in Nepal